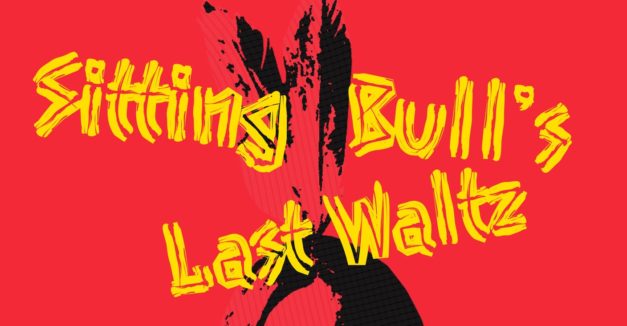 Sunday night during a rehearsal at Lincoln’s Johnny Carson Theater, Carolina Hoyos recites her line: “Time will show who is right and who is remembered.” Hoyos plays Seen-By-The-Nation, speaking to the character’s husband — famed Lakota holy man Sitting Bull, here acted with earnest understatement by Alan Tafoya — in an intimate moment after a heated confrontation with government authorities.

The line may as well be a thesis statement for its musical theater production, Sitting Bull’s Last Waltz, directed by Lara Marsh, which runs March 2 – 5 at Johnny Carson Theater at the Lied Center. All proceeds from the show will be donated to Standing Rock Reservation.

This good-vs-evil retelling of Sitting Bull’s later years carefully manifests Seen-By-The-Nation’s prediction. Indeed, more than 120 years after his death, Sitting Bull is a household name, while the work’s central antagonist, James McLaughlin (played by Cork Ramer), is remembered primarily by those who study the period through his combative relationship to Sitting Bull. Sitting Bull’s Last Waltz, written and produced by Lincoln-native John Templin Schliesser, takes a necessarily, if coincidental, political stance about the federal government’s relationship to and control of Native Americans.

Writing for the production, billed as a “post-punk musical,” began in 2013. Three years later, Standing Rock, where Sitting Bull lived, also became a household name for protests there against the Dakota Access Pipeline. The extended protests on the reservation, like the life of Sitting Bull in Schliesser’s vision, have served as a historical allegory about Native American autonomy and self-determination.

Schliesser said he didn’t intend for Last Waltz to draw on contemporary parallels. Though as the production has come into being those lines have been providentially drawn, he said his first interest was in relating the circumstances of Sitting Bull’s death, a series of events that have stuck with him since he was young.

Sitting Bull gained national prominence through his leadership during the Battle of Little Bighorn where a coalition of Plains Native American tribes defeated General George Custer’s cavalry regiment. He went onto tour in Buffalo Bill’s Wild West show (Buffalo Bill and Annie Oakley are both featured in Last Waltz) before McLaughlin, who supervised the Standing Rock Sioux Agency, forced him to return to the reservation. According to Schliesser, McLaughlin was jealous and wary of Sitting Bull’s growing fame. Eventually, the rising tensions between the two come to a fatal head.

“The way he died, when I was a boy, touched and moved me,” Schliesser said. “I thought it was cool that he’d done all this stuff, from defeating Custer to starring in the Wild West Show, to taking this stand — he had too much dignity to go along with this arrest ordered by James McLaughlin, and he died as a result.”

When he decided to take the project on after a 2013 visit back to Nebraska from his home in California, Schliesser said he wanted the medium to capture what to him was the spirit of Sitting Bull — a prototype to the punk and protest music Schliesser grew up with. There’s perhaps a personal conflation then, in Last Waltz, between the story that captivated Schliesser as a child and the records he dug out from Lincoln record stores coming of age.

“(Sitting Bull) really had a way with words,” Schliesser said. “He was a naturally theatrical person. So it was a little like a lightning bolt, ‘it has to be a musical, something with a lot of driving energy.’”

He began penning skeletal versions of songs for the script, his first time earnestly writing music. Schliesser said he was fortunate to get connected with Iggy Pop guitarist James Williamson and Max Sterling, who helped him realize the full vision of the music.

His wife, co-producer Kathleen Dougherty, was also “a huge force” in shaping the music. Other music collaborators included the show’s musical director Erik Paparozzi of Cat Power, Guy Blakeslee of Entrance Band, Joe Cardamone of Icarus Line and Will Scott of Wolfmother. With that resume, Last Waltz delivers on its post punk rock opera promise, better placed with Tommy than Oklahoma! and Tafoya’s voice is suited so well to the style it may as well be his professional background.

So Last Waltz counts among the progeny of Sitting Bull’s work both post punk protest as well as the current political moment — one by Schliesser’s own interest and the other by fate of timing. By placing both movements squarely in Sitting Bull’s lineage, this piece of lightly-experimental musical theater subtly reiterates what Schliesser calls the most pertinent dimension of the Lakota leader’s life.

“(The) message embedded in the story is his relationships with people outside his culture and race,” Schliesser said. “We can’t let little minor divisions keep us apart.”

Wednesday night, Erik Paparozzi, Spirit Kid and Ben Lecourt will perform songs from the production and originals at Zoo Bar. RSVP to the 9 pm show here. They will also be spinning DJ sets at Marz Bar following the Friday and Saturday night productions.