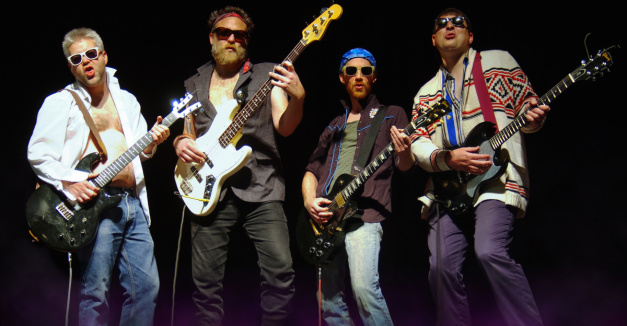 [Editor’s Note: These review preview tomorrow night’s double album release from Sputnik Kaputnik at Zoo Bar. If any portions of the review don’t make perfect sense to your earthly brain, just know they’re written (the first especially) in the universe of the Lincoln concept band. Listening along here and here will help.]

‘Destiny and Desire: More Songs in the Key of D’

‘D’ stands for many things: track-by-track instructions for listening to Sputnik Kaputnik and the Technical Manuals’ Destiny and Desire: More Songs in the Key of D

Warning! Listening to Destiny and Desire: More Songs in the Key of D in a standing position may result in woozy loss of balance or existential conflicts of the highest order.

When listening to Lincoln’s finest four-piece devolved synth and freak-out band, it is important to avoid operating heavy machinery or futile attempts of seduction.

Always drink at least a gallon of Sunny D to make sure scurvy does not set in whilst enjoying the tunes.

Over a dense and denatured synth pattern, album opener “Blue Baby” finds Sputnik singing seductively to his baby. Is the baby blue because it’s sad or just because it can’t breathe? Is it a baby? He knows they’re meant for each other. It is their density.

Sputnik explicitly declares what kind of drinks he does not desire. [He] don’t want no pina colada…[he] don’t want no margarita…” while the band plays a delightful circus freak-show groove that would be fit well in a Terry Gilliam-directed psychedelic sequence.

Creepy whispers, freak-show synth blasts, eerie ghost sounds, and a three-note bass motif instill in the listener a sense of dread akin to that familiar feeling of being hunted by beasts of the forest. Fortunately, it resolves to a delirious and comforting bath of warm synths. Your fears were just phantoms. Get down.

As my grandfather always said, you can’t worry and dance at the same time. So it is with this dance-y track. The insistent hoedown snare beat and quirky synth insist that you get out of your seat and dance. If no one really knows what’s really going on in the universe, what should you do? Sputnik and Lee Ann Womack hope you dance.

Do Sputnik and the Technical Manuals dream of electric sheep? This track finds the prog-mod pranksters riffing on a Vangelis-esque score that Ridley Scott could have used as the love theme to Blade Runner. With lyrics like “I’m so happy for you…I don’t think I can take it anymore” this is truly the unrequited loved song of the album.

Here we find Sputnik and the TM Movement hunting the big fat man from the North Pole down and demanding all the things he didn’t deliver last Christmas. Say what you will about consistency, SK still desires the same things he wanted the last time he recorded this song: “ponies, a donkey, world peace, Ultimate Nachos with sour cream and guacamole and a bottle of Scotch — something aged at least 20 years.” However, if dramatic and climactic emphasis is to be trusted, what he really wants most is a gift certificate to McDonald’s. It’s hard to not picture the look of horror on Saint Nicholas’ face as he realizes these fellows are not going to give in, give up, or give quarter. No quarter will be given until St. Nick coughs up the bacon.

On this brief and intense album closer, the lead vocals channel atomic death-meister J. Robert Oppenheimer when he warns the listener that he’s “coming to your house!” He might as well have said, “Now I am become Sputnik, destroyer of worlds.” Before you know it, an abrupt and surprising end results in the completion of the death cycle the album began a mere twenty minutes earlier.

CAUTION: TO REDUCE THE RISK OF SYNAPTIC SHOCK, REALIZE THAT ‘D’ is for a lot of things and Sputnik Kaputnik and the Technical Manuals are for all of them.

‘Between a Rock and a Star Place’

A cursory glance at the cover of Sputnik Kaputnik’s third album would conjure associations of 1980’s L.A.-Strip glam-metal, the last popular mainstream type of rock star. (Grunge’s flannel today would just be mistaken for indie lumber-sexual.) All four members of SK are posed with guitars and making Steel Panther-esque facial contortions. The irony is heightened by the fact that there are no electric six-strings in Sputnik Kaputnik’s sonic landscape.

So what sonic terrain does Lincoln’s prog-mod band cover on their junior effort? It is largely a continuation of the esoteric, clever, and quirky lounge freakoutery of their first two albums, but with an added element: a poppy catchiness that adds to the subversive commentary. With only a few listens, these earworms will be chewing through the candy apple of your mind.

Things start off with a slow-jam called “Cold Beer (at Warm Prices)” which finds downtown characters wanting to prolong the magic of the evening past last call with off-sale beer and pizza rolls. The warm synths suggest the comfortable pleasures of such simple pleasures. There is a melancholy humor when the after hours gets down to one can, and the host of the party suggests splitting it three-ways before proposing a collaborative get-together.

Things pick up with “Dollar Fever” with fuzzy synths and vocoders that suggest all the hype and energy of a thousand slot machines creating a hypnotic go-go while a money-hungry landlord promises to raise your by rent by ridiculous amounts. “What Rhymes with Nebraska?” is a loving tribute with plenty of inside jokes that anyone who has spent their earthborn existence within the six-sided walls of the Red State.

The centerpiece of the album is an ethereal synth instrumental called “Hearts of Iceberg” which would not be out of place on a Gorillaz record. (Perhaps Damon Albarn could collaborate with some nasal British-rap overdubs?) A NASA-recorded sample of the band’s orbiting namesake beeps a few times at the track’s conclusion. (This is a clue to the album’s title: satellites are always stuck between Earth and the shiny astrological matter.)

“Summer School” is, as can be inferred from the title, is about all the existential dread of having to face the most undesirable use of seasonal time. It’s about all the things you don’t want, but now have to face, just because you failed Spanish, English, Civics and Lunch.

The last song on the album, “His Eyes are on the Orioles” features Thom Yorke-ian vocals by keyboardist Joshua Miller. In an apparent callback to Sputnik Kaputnik’s debut cover of Sun Ra’s “Nuclear War” the vocals conclude that the future is uncertain and the end is always near so “So let’s all march/Into the sun/With Dr. Brian/O. Blivion!” The Dr. Strangelove-style ending of just learning to go with the flow and not worry so much is a fitting conclusion to a post-modern collection of life’s upbeats and beatdowns.

Post-script: (There is a ten-second final track called “S E C R E T” that hides its meaning in brevity and wordlessness, but it’s been rumored that card-carrying members of Sputnik Kaputnik’s Secret Order of Fanatics will someday receive decoder ringworms.)