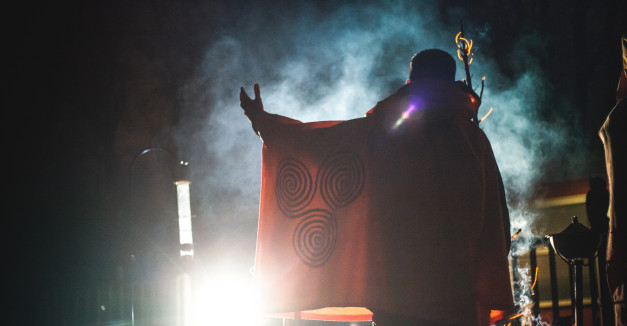 We knew Feel Tight was going to be some ambitious blend of kooky, dark and technologically unreserved when we sent contributor Molly Misek and intern Marco Meyer to shoot a photo essay about the band’s gear in January.

What was originally intended to be a straightforward rundown of the band’s instrumental set-up turned into the much more interesting, visually stunning and totally captivating “How to Get Loose with Feel Tight.”

Where there would have been photos of guitars, pedals, keyboards, maybe a gong, there is now triple-spiral robes, a homemade geodesic dome, laser-wands, swords and trees set aflame.

That was our essential introduction to Feel Tight and the trio’s new EP The Spooky Mingo, released at the end of January. The trio is made of Jason Meyer (Talking Mountain, Calm Fur), Mike Johnson and Josh Soto (The Seen).

And The Spooky Mingo holds up to the expectations set in “How to Get Loose.” Yeah, it’s sort of a Black Sabbath appreciation project (as was Feel Tight’s nascent intention) in that the cover art mirrors that on Master of Reality and “War Pigs” and “Sweet Leaf” both make appearances, updated for 2015 in Feel Tight’s hands. But mostly, it succeeds on realizing its aesthetic vision.

If songs could wear hooded robes and wield flaming katanas, these ones would.

The EP opens with “Weird Howl Pt. I” (and thankfully closes with a part II), a lulling track that rocks back and forth like the swinging pendulum in the hypnotist’s white-gloved hand. It’s a slow and mesmerizing entry into Feel Tight’s world. Deliberately picked guitars carry the weight, but atmospheric synthesizers point to where the EP is actually headed. Down a rabbit hole to where shredding, heavy guitars are not a hallmark of brute force and masculinity but of a sensitive appreciation for the bounds of electronic technology.

That’s the case on the other end of “Weird Howl Pt. I” when “Whole Lotta War Pigs” enters with a crisp, grooving bassline, driven home by robot vocals. And the iconic “Oh Lord, yeah,” at the end of the first verse feels more like an experiment here than an impassioned cry. Like Feel Tight wants to see if it can impart genuine emotion through a cold, unfeeling voice.

On the flipside of the technological spectrum, “Who?” is driven by a lightly-strummed acoustic guitar and Meyer’s delicate voice, one formula for the quintessential emotional song. But each moment is quickly and violently interrupted by thunderous guitars. Nothing will get in the way of a geeky obsession with heavy metal.

The Spooky Mingo closes with “Weird Howl Pt. II,” a continuation of the first track. In between the bookends, the noise has gotten more chaotic, the guitars more free. Until it fades out on static.

You have now exited The Spooky Mingo.

But what happened in between? Structurally, Feel Tight offers a six-track mirror. The first three tracks go: intro, Black Sabbath cover with a robot voice, soft original song save for the masterful guitar work. The next three tracks follow the pattern but in reverse. “War Pigs” and “Sweet Leaf” certainly stand out, maybe because they were written for one of the best metal albums of all time.

With “Who?” and “The Same Lake,” the two original songs, Feel Tight seems to avoid trying to best Black Sabbath at its own game. Rather, the tracks are there as a way to test the prominent elements (mostly guitars) with the band’s own developed skillset, which has Jason Meyer’s pop-minded Talking Mountain handprints all over it.

So The Spooky Mingo is largely an aesthetic exercise through two lenses: the Feel Tight lens and the Black-Sabbath-via-Feel-Tight lens.

It doesn’t exactly feel cohesive at every moment, but in that it’s like the geodesic dome and triple-spiral robes: It doesn’t have to mean anything, but it is a lot of fun.