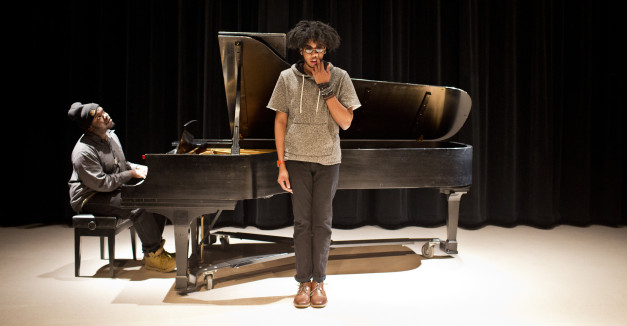 There’s a wonderful juxtaposition to the Both in the latest Sonata Session and the Both that won’t take itself seriously (the band’s URL, Instagram and Twitter are all BothSucks; last year they toured with The Seen on the “Great Rock, Weak Raps” tour).

It’s not that it took producer INFNTLP playing beautifully on a grand piano in University of Nebraska-Lincoln’s Westbrook Music Hall for us to realize that the Omaha duo is among the best in Nebraska hip-hop. Anyone that’s been paying attention in the last year could tell you about INFNTLP’s boundary-pushing production and Scky Rei’s aggressive-slacker vocal delivery.

But it’s gratifying to see the duo acknowledge their own talent, as well, or at least not obscure it behind a self-conscious veneer.

In the dimly-lit performance hall, Scky Rei’s lines hit with greater force than they might had they been packaged with an apathetic shrug. Here, in the domain of the self-serious — a room where earnest music students are critiqued by masters of the craft — lyrics like “I’m expected to fail because I’m a black male, but I’m expected to prevail because I’m a young black male,” carry a ferocious weight.

And near the video’s close, when Scky Rei says “Both, yes that’s us. That’s we,” before INFNTLP takes it out on one more piano-flourish, it feels like a small moment of recognitional triumph. Yes, this is us and this is what we’re capable of.