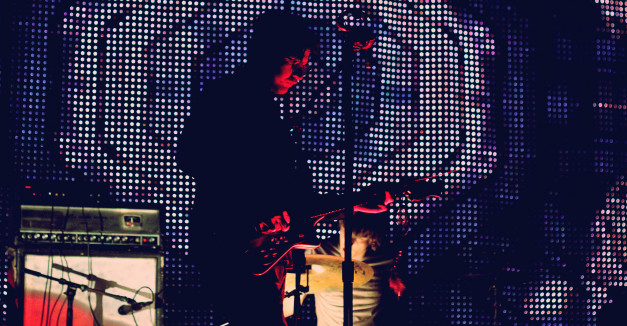 Psychedelic and punk rock will fill up Turner Park Wednesday night, with performances from two Omaha bands, Snake Island! and Noah’s Ark Was A Spaceship.

The Hear Nebraska and Hutch-sponsored show is the final installment of a four-week Turner Park series. It’s the makeup for a rained out show earlier this month, and it’ll run from 6 to 8 p.m. Admittance is free, so bring lawn chairs and/or a picnic blanket, some food and/or booze, and kick back.

To prepare for the farewell to the summer series, we checked in with both bands for their latest news.

Hear Nebraska: How does playing hometown shows differ from shows on tour in terms of mood and audience?

Allan Schleich: Every town has its own vibe and way of appreciating music. We are also aware of a famous saying that states, “You are always a local band in your own town,” yet we always have a surprising amount of support in Omaha all things considered. In other cities, we tend to have a fairly wild reception like we’re bigger than we are, but in Omaha we get a strongly supportive and knowing nod from the Omaha people. Omaha people believe in their local music more, other towns support their touring bands more.

AS: Huge Fucking Waves is only my project … I host a revolving lineup of musicians to be my rhythm section. Most predominantly is Ryan Haas on drums and Bryce Newbanks on bass, who are both former Snake Island! members. Ian [Mansfield] has moonlighted as a drummer. My roommate Clay Staley has been bass. Surf has always been my love. It’s been seeping into Snake Island’s sound since the beginning.

HN: What is Snake Island! working on next?

AS: Writing new songs, playing out-of-town a lot. Hopefully a new EP in the future.

Noah’s Ark Was A Spaceship

Hear Nebraska: Noah’s Ark has been pretty quiet in terms of new music for a while now. Are you guys working on anything right now?

John Svatos: Currently, not right now. It’s been a super busy year for us. I moved out of state for a while after I did a school program … Our guitar player just got engaged and our other member was recently married and went on a honeymoon. I also went on tour with a different band for a while. Just now in the fall, we’re talking about getting into everything again.

HN: What band did you tour with?

JS: I didn’t play. I repair guitars and stuff, and I went with Conor Oberst, who I’m good friends with, for a while. And for that, I drove a truck full of equipment on that tour. I’d already worked with those guys a year prior ago. I do production work and stuff for 1% Productions and they needed some help.

HN: Do you think working with Conor and touring will influence the sound of Noah’s Ark Was A Spaceship for future projects?

JS: I wouldn’t say it would influence the sound. I mean, culturally, touring on a level like that is quite a jump from playing Omaha shows. Some of these places are just massive, massive venues and concert halls and stuff. For people who don’t get to see that side of stuff, it’s a pretty drastic change. The quality of life is a little bit better because you’re really taken care of on the road. But that doesn’t deter me from doing what we do locally.

HN: In a professional and behind-the-scenes sense, has touring with them changed your perspective on things and what your band might do in the future?

JS: If you’re on that level, you can afford real professional sound guys and the equipment is a lot nicer, so you never have to worry about issues. You have a team of professionals working with you, but all of those guys, they started just like us. So they keep it pretty grounded. They started playing in a basement in Omaha just like we did. No one ever wants to tour with a spoiled brat, you know. Being humble on the road, just getting a taste with some of that stuff, you can’t let it get to your head. You don’t want to be some pompous guy.

HN: What’s a Nebraska band or artist that has impressed you lately?

JS: Twinsmith, I’m a really big fan of. The band Pro-Magnum is amazing, they’re some good friends of mine as well. See Through Dresses is a great band, as well. Those are probably my top three right now.