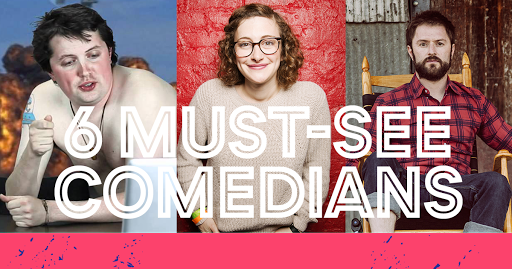 Comedy can be an underrated aspect of any major music festival, an alternative but undoubtedly related culture often brushed to the side or lost in the marquee glow of big-name musicians. Yet for the likes of Gainesville’s The Fest, stand-up forms an important part of a well-rounded event, which is why Lincoln Calling has made comedy part of its focus this year.

The lineup features a long list of multi-talented comedians with varying styles — from the self-deprecation of Jo Firestone to the character arsenal of Brett Davis to the sketch comedy of Timmy Williams. Get acquainted with them and three more hilarious comics on the Lincoln Calling lineup.

“From the beginning of time, mankind has relied on gameplay to interact and grow,” says Jo Firestone after emerging from behind a curtain at a rendition of The Incredible Game Show Showcase last April. The Brooklyn comic’s MO is The Scenario, having created and hosted several live shows around the city including The Unexpectashow and Punderdome 3000. She has also appeared on the hit Comedy Central show Broad City and in Mike Birbiglia’s new film Don’t Think Twice.

Firestone’s love of the game extends to her stand-up routine: her “I Have Been There” gimmick has blown up as of late, using a heaping amount of bludgeoning self-deprecation to coax sharp relatability from the audience. By the end, you might find yourself coping with more of your unseemly, newly uncovered habits than you might like. Find out below:

One of the creators and stars of Those Who Can’t, Adam Cayton-Holland is a national touring headliner who plays clubs, festivals and colleges all over the country. He was named one of 25 “Comics to Watch” by Esquire Magazine and has appeared on Conan and The Pete Holmes Show. Cayton-Holland has also performed at the Montreal Just For Laughs, SXSW, Bridgetown Comedy and Rooftop Comedy festivals, and launched his own comedy festival in Denver, The High Plains Comedy Festival, in 2013. His monthly show and web series “The Grawlix” also features Andrew Orvendahl and Ben Roy, who join him on the critically acclaimed TruTv show.

The Denver native’s jokes often live at home, whether within his My Dining Room Table podcast, which professes his love for all things Mile High, or in the incisive banter exchanged between family members. Watch his February 9 performance on Conan below:

Before he turned to organic farming, Nebraska-native Ross Brockley made his name in the drug-fueled New York comedy scene, coming up in the same circles as the likes of Louis C.K (for whom he has opened in Lincoln). He later moved to Los Angeles to further pursue his standup/acting career, starring hilariously in Holiday Inn commercials and, more recently and seriously, two films by the Omaha director Nik Fackler. The fearlessness and innovation with which he operates on his farm extends to the stage, where his takes on depression, alcoholism and car wrecks both literal and figurative spill out stream-of-conscious likes. Watch this 2014 turn at Zoo Bar below:

While many of the comics on the Lincoln calling billing are multi-talented and multi-passionate (see above), Conlan draws upon a deep well of sports knowledge (and an oft-accompanying endless reserve of sarcasm) to drive the point home. A writer for snarky yet spot-on SB Nation and as well as the ever-reputable SI.com, the Denver comic has recently tackled Olympian self-reverence, body-swapping with Peyton Manning and the hugeness of Lebron James. But it doesn’t end at sports; see below:

You know that guy that dies at the beginning of the inaugural The Whitest Kids U’Know episode in a sketch about the assassination of Abraham Lincoln? That was Timmy Williams (as a white Othello). As one-fifth of the massively popular sketch television show (which ran from 2007-2011) , the South Dakota native built a writing and comedic career upon the classic send-up to which such a format lends itself. Writing and acting in the show’s wake, Williams has proved no target is safe, not Shakespeare, not realtors, nobody.

Brett Davis performs comedy under the guises of his many twisted characters, live and on The Special Without Brett Davis, dubbed “The Best Punk Rock Comedy Show on Public Access TV” by Nosiey. From creepy “Montclair State University” poetry professor to trust fund crust punk, they all share a distinctly New York quality that ties them together.

Davis was the winner of the 2015 Andy Kaufman Award and was one of Comedy Central’s “Comics To Watch” in 2015. He co-hosts the monthly extravaganza erroneously titled The Macaulay Culkin Show at Shea Stadium in Brooklyn, and the monthly Lethal Lottery at Over The Eight. He produced the short film BANANAZZZ and has an upcoming IFC webseries. He has appeared on The Chris Gethard Show — where he debuted a rogue public access host “Smith” — Adult Swim, MTV, The Best Show on WFMU, numerous music videos for the likes of (Lincoln Calling artist) Screaming Females and Mike Krol.