The cancer-ridden mother and wife works in the garden, despite visible weakness. She tirelessly scrawls letters to a daughter-in-law she’s never met with the sense of urgency brought on by a year-to-live prognosis. She writes so laboriously, her husband, Noland, questions aloud whether she’s clinging to life for him or for some hypothetical future.

But away from the solitary couch on which Dorothy languishes; from the audience at Friday night’s debut of the play by Crystal Davy (of the Lincoln band Dear Herman), what holds Dorothy up is not a force on the stage or a line in the soundtrack, but the exigency of the story itself. Though the subdued mother doesn’t reign over her family, she aims to preside over its lineage and its narrative like a concerned, altruistic matriarch. She battles in mostly silence for a little legacy control of the estranged relationship between her son and husband. In her written words, she has a hand in solidifying her own epilogue. 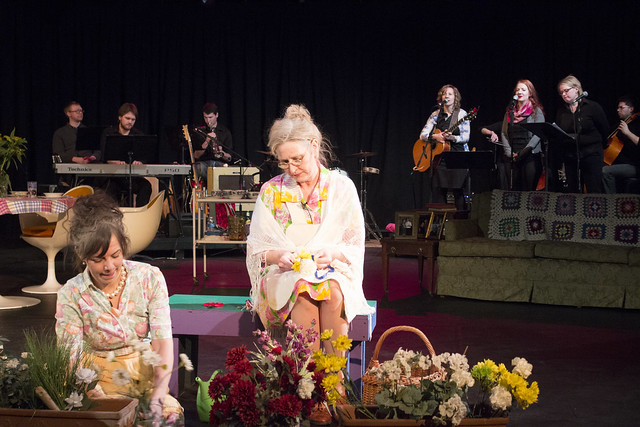 In late 2013, Davy, who on the very-near heels of completing the concept album Sincerely, Dorothy, set about staging the album as a piece of theatrical performance art. Last Friday and Saturday, it reached three audiences by way of emotive, balladic folk music. It’s a touching story more focused on an emotional journey than any questions of whether Dorothy’s death sentence is really a final one. And given the plays’ ticket sales, obviously, there’s an appetite for such a tale. Originally, Dear Herman, which is principally Davy and her singing partner Melissa Taylor, planned a Nov. 8 and 9 show at the Auld Pavilion of Antelope Park, but moved the date when the scope of the project and projected audience asked for a more proper theatrical setting. After selling out both Friday and Saturday’s 7 p.m. performances, they added a 10 p.m. show on Friday.

The result of the first of the two Friday night shows was a production in the family of a musical, but with a sort of inverse relationship between the script and a score. With the band positioned behind the ground-level stage, in many cases it was the songs — the articulation of Dorothy’s letters — that offered more about the characters and the seaside Northern California town of El Pasillo in 1962 than the cast’s dialogue. On that same page, the conversational snippets were more responsible for tone and for inflection: the indulgent cordiality in the voice of a worried husband, the strained move toward comfort from the wife who has every right to be more afraid than the people around her. Therefore, most of the songs maintain a singular focus on one character: the song “Noland Mains” for Dorothy’s husband, “Gad Harvey” for the town drunkard who loves Noland’s sister, “Mrs. Julienne” for Dorothy’s doting neighbor and several more.

With Davy and Taylor’s constantly linked harmonies at the center, the peak of Friday night was ruled by an 11-piece band that pushed its ranks to as many as 12 when they were joined by a third singer, Gina Seebohm. For their choral qualities, Dear Herman’s songs maintained their traditional melodies of an Alison Krauss, but with substantial dynamic variation that made possible both Davy’s picked acoustic guitar and a sonorous show closer. Fully fleshed out, the band resounded with trumpet, cello, accordion, piano, drums and mandolin. 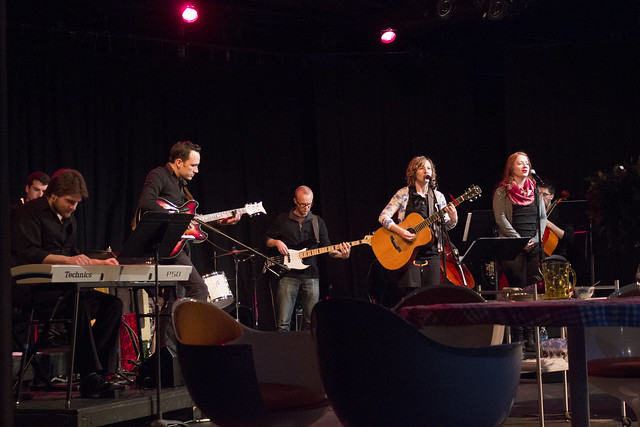 At their smoothest, the many transitions between the brief three-to-five-minutes acting scenes and the songs could be cinematic, in which the band and the actors didn’t appear as separate entities. Particularly pointed musical cues glossed the change into songs such as “Elizabeth Mains,” about Dorothy’s young, self-muted daughter. Davy’s fingerpicking crescendoed just as the lights left the stage and illuminated the band. But sometimes, given an opening-night roughness, these transitions could divide the audience’s attention into a diametric experience, batted back and forth between a miniature-play and a concert. Also distracting were the hot, fidgety microphones of the actors popping in and out of earshot and squealing when characters moved too close to one another, which is a problem with a hug-happy family seeking comfort among each other.

But the move to the Haymarket Theatre mitigated medium-definitive questions about what this production was. The staging, wherein the audience was basically on top of the stage and actors sometimes appeared from the crowd, cultivated a sense of fluidity between performer, writer and observer. The theater’s modest, sloping bowl immersed the audience with the sparse and simple scene-setting of 1960s-era setting of vanilla astro chairs (the kind of thing you’d find spotless at your grandparents’ basement bar). Also the omnipresence of flowers planted imagery that seemed to foreshadow a funeral, while linking life and death in a vision of fragile beauty. 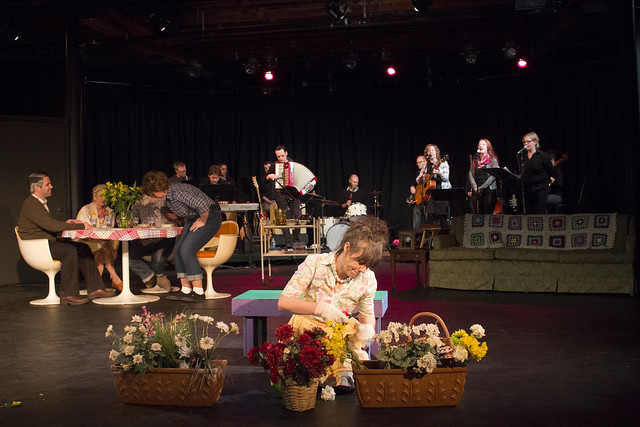 Most telling about the night was the small smile on Davy’s face, as she was positioned near the middle of her band and behind the cast. The smile reassured through technical difficulties and grew into a beam when the audience let out quiet mews through the production’s most heightened drama.

In an interview last year on Hear Nebraska FM, Davy explained that the music of Dear Herman (she and Taylor previously recorded an EP, Immigrants and Strangers, under Davy’s actual name) began as a writing prompt, encouragement to herself to pen more narrative songs. Months later, Sincerely, Dorothy is such an uncommon kind of performance, a concept album with so much breadth and so loyal to its ideas that they had to transcend the songs. And so it’s crucial to keep the order of things in mind. If it seemed like the actors lacked some movement and onstage duties, that the music is predominant to the dialogue, that’s because it is. Sincerely, Dorothy is a far more satisfying experience if you consider the handful of scenes to be a supplement to their parent album, not the other way around. 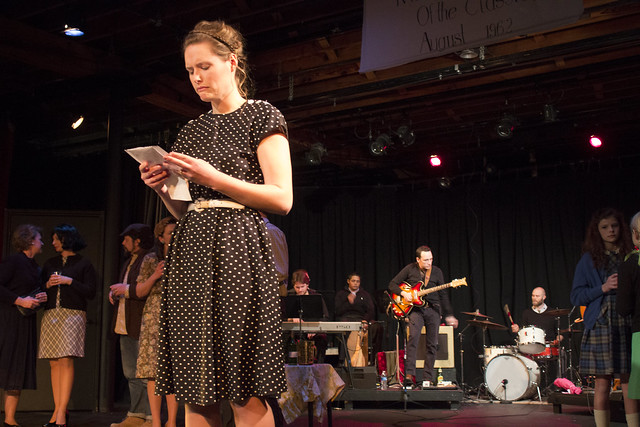 For her importance to the fabric of it all, Dorothy had two voices, one from the actress Alicia Reisinger and one larger and more deified from Davy. And, thus, it’s the fictional mother who moves the characters about the stage. The characterizations (glowing and incriminating) come from her, and when she eventually does succumb to her illness, it’s clear she’d become a central figure in the town, who’s made these other characters worth developing.

Prior to the first notes of the evening, Davy offered context to the crowd for her authoring of Sincerely, Dorothy. She said she was inspired to write the play based on an experience in her family of someone’s last days to answer the question: “When you wonder how long life will last, what are the things you need to say before it’s too late?” 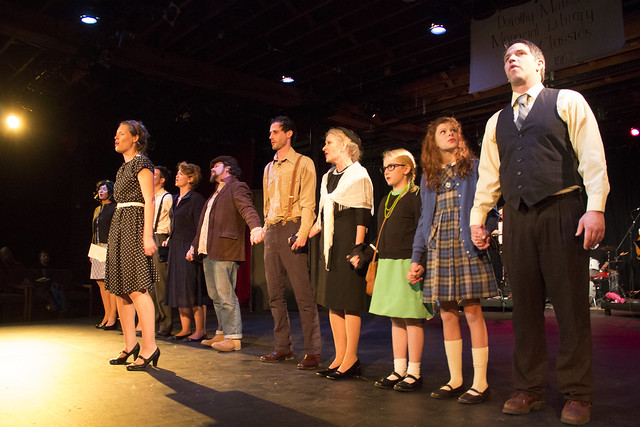 And when at last the audience rose for a practically unanimous standing ovation, it seemed to be in part for the applicability of the lyrical message. When Davy speaks of the album growing bigger than she could have imagined, it’s only a stone’s throw from the tale of a cancer patient to the rest of us seizing hold of our stories. Because in principle, what separates the inevitable end of one year from the conclusion of 40? The cheering honored a certain kind of universal writing, a mixture of art and self-eulogization, and for how much life can be remolded by imagining it as near to its end as possible.

Chance Solem-Pfeifer is Hear Nebraska’s staff writer. For a small taste of the live Dear Herman experience, give a listen to their HNFM appearance last year. Reach Chance at chancesp@hearnebraska.org.