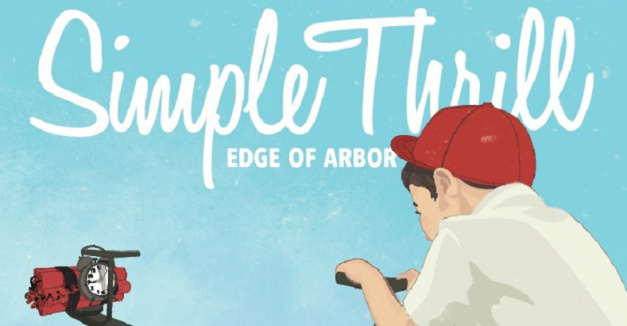 [Editor’s Note: The following is a peer review by All Young Girls Are Machine Guns frontwoman Becky Lowry. Edge of Arbor officially releases its album tomorrow night at Reverb Lounge. Our thanks to Becky for contributing]

Currently, aside from fronting Omaha band Edge of Arbor and playing numerous solo gigs, Jessica Errett plays bass for PYRATE, sings back-up vocals and plays lead guitar for All Young Girls Are Machine Guns, plays most Sundays at church and just got back from subbing for Billy McGuigan’s Rock Legends on tour.

Simple Thrill, debuting Saturday night at Reverb Lounge in Benson, has been a five-year exercise in patience. Jessica started writing songs for the full-length back in ‘09 and has been recording this album on and off for the last two years. In that time, there have been a number of milestones for the band members, including a changing of the guard as local guitar hero Matt Whipkey traded hands with Adam Christensen (both appear on the album). As maybe one of a small handful of people who have heard her play live more than your average EoA audience member (or, in some instances, band member), I’ve been able to hear these songs change form from their baby beginnings to the album versions, and let me tell you, I am thrilled with the results.

The album starts out with “Lover’s Kiss,” an ode to that blindsiding kind of love that comes in and bowls you over. Errett whispers her way through the song with guest Matt McGuigan singing harmonies alongside her. The effect is a trip that takes me back to Jars of Clay’s first album. I am into it. This is Whipkey’s first appearance on the album and it is tasty and tasteful. James Gallup’s bass shines and drives the song.

The next offering is the title track, “Simple Thrill.” It’s a song about staying out too late and getting yourself into trouble. I always enjoy watching this song live. Watching percussionist and drummer Matthew Shrader and Jason Domonkos trade places with Shrader on the drums and Domonkos on the glockenspiel is a familiar sight. The trade-off is just as enjoyable in the recording. “Simple Thrill” is the halfway point between a Tom Waits sound fit and The White Stripes’Conquest and guest Jon Flanagan’s trumpet takes the song to the next level.

“Smoke and Fire” is a Whipkey solo-driven barn burner that I believe would be just as comfortable played alongside any Jenny Lewis offering as it is in any Benson tavern. It’s my go-to version of “Liar, liar pants on fire.”

“He Sees Red” is a song written about Lois Lowry’s book, The Giver, and was written long before the book became the movie. As a fellow nerd who has written her fair share of book reports set to music, I give this one a gold star. Adam Christensen put together a hook here that I’ve been humming to myself absent-mindedly since I gave the album a first listen.

“Don’t Go,” the newest song written for the album, was written and home-recorded in the same night about one of Errett’s friends who took his own life. She found a message from her friend’s mother after the fact, asking Errett if she could think of a reason for what he did. Producer Curt Grubb liked the home recording so much that he used it and added guest Danny Sabra’s haunting violin later.

“Your Arms” is like a secret love note brilliantly tucked in the pocket of a dark, brooding buildup of a song. This is trademark of Errett’s songwriting — that it’s so easy to get lost in the actual music of the thing, get so lost in her airy soprano, that you almost miss what the songs are about.

“Backslide,” the last song on the album is one of my personal favorites. While I was looking forward to hearing the hook Whipkey plays live, Christensen totally sells his brand of guitar. The drums and the percussion have attitude. The bass has attitude. And this song puts front and center the pinnacle of the thing that endears this album so much to me.

In the last two years, it has been my privilege to stand beside Jess as we’ve performed on the same nights at open mics, on the same bills, and now in the same band. In ’08, when I first met her, Jessica had established herself as a quiet, solid performer, owning her guitar and always striving to get better on her instrument. Lately, she’s been stretching her wings, shaking things up, and making decisions, vocally, that are out of her usual vocabulary and just knock the wind out of me. The vocal breakdown of this song had me cheering the first time I heard it — literally had me throwing my fist in the air, all John Bender, Breakfast Club-like. And the whole album has this going for it. Her lead vocal and backing vocal decisions are just so on point. Jessica Errett is a gold-standard vocalist and lyricist with an immense grasp on writing a song that a band can fill out.

Edge of Arbor does itself proud and we should all respond in kind by cheering them on, buying the album, and buying the band a round at Reverb Saturday night.