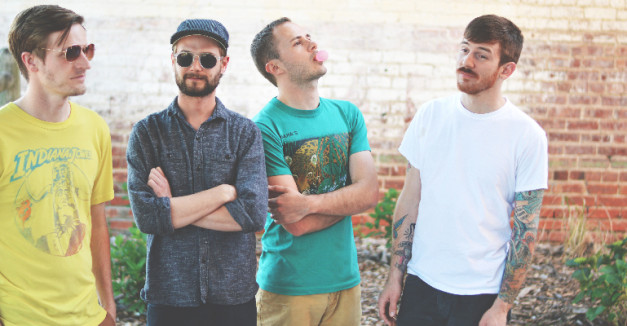 With the arrival of its debut EP, In The Glow, Omaha rock quartet Uh Oh lands with no-frills rock. And its first release, “Shooting Arrows,” celebrates with polished song structure and some shaking, blue collar execution.

Dropping July 17, In The Glow was recorded with Kansas City sound engineer Ross Brown, who’s worked with Everyday/Everynight, The Empty Spaces, The Fullbloods and the ACBs, among others.

It is easy to imagine yourself sitting in a tavern, listening to Uh Oh singer Joe Champion’s ragged voice, as he and quartet inhabit a small, dimly lit stage at the back of the bar. On the group’s Facebook page, they put is simply saying “We love rock and roll, so we want to play some.”

“Shooting Arrows” is simple and catchy. As each instrument alternates a feature in the track’s foreground, Champion’s voice and lyrics give the song an intimate vibe.

Scott Ausdemore assumes lead guitar on the track, and his clean, sparse rifts reach the peak of a song-long crescendo with a solo, gain-boosted bridge and chorus to end the track. Erik Trent on bass and Anthony Bradley on drums give the track a poppy heartbeat, and, like Ausdemore’s guitar, have a Weezer-like scantiness to them.

For the album release Uh Oh will be playing a show at The New BLK, an ad agency and art gallery in the Old Market. The group will also be playing the Omaha Entertainment and Arts Awards Summer Showcase at Barley Street Tavern this Saturday, June 6. RSVP here.

Listen to the premiere of “Shooting Arrows” here: