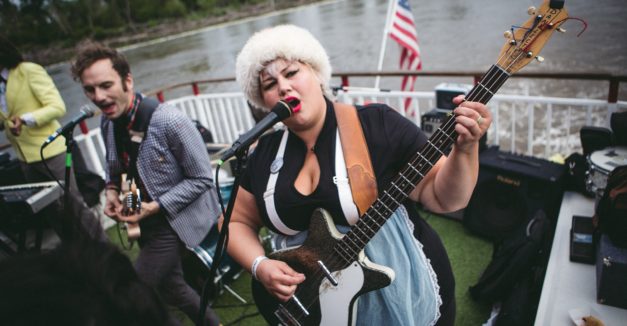 Unlit tiki torches, fake palm trees with tearing leaves and a rope bridge that covers a body of rocks rather than water are just a few elements that make up the faux-tropical aesthetic of Omaha’s River City Star offshore tourist attraction at Miller’s Landing.

The classic two-story boat cruiser docks daily on Omaha’s Riverfront, offering rides along the Missouri to its neighboring Nebraska and Iowa residents. It’s also where booking company Perpetual Nerves hosts its Sailin’ and Wailin Boat Cruise on the River City Star, which makes for an atypical Sunday evening rendezvous on the river.

A group of patrons drink cocktails and bottled Budweisers in their best dress, and the bartender at Muddy Mo’s Watering Hole, an outdoor tiki hut that serves the cruiser’s inland guests, yells out from the window for a last call on drinks. 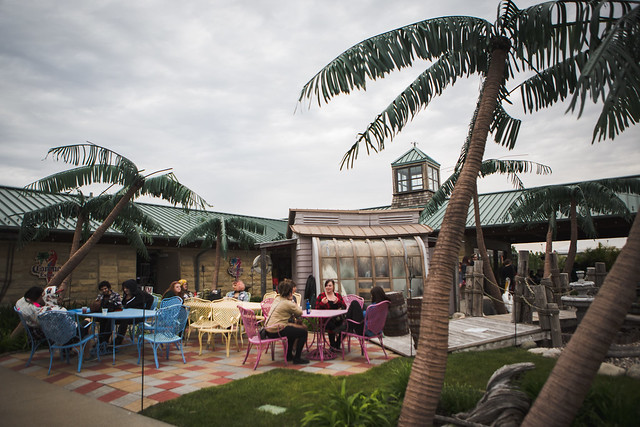 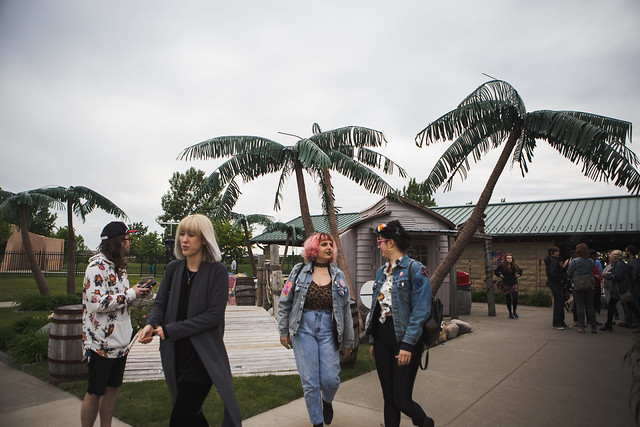 Perpetual Nerves’ Sam Parker lifts a chain that guards a long flight of concrete stairs toward the dock, permitting guests to board the River City Star. As a curving line forms outside of the boat, the West Coast doo-wop surf pop quartet Shannon and the Clams can be heard soundchecking from afar.

There is something intimate about attending a concert here, partially due to the limited amount of space, but mostly because once you’re there, there’s no getting off. As guests board the watercraft, they are greeted by Captain Ken (this is his fourth cruise of the day) and take a moment to appreciate the view of Omaha’s downtown skyline in the distance. The Star’s signature sloppy joes are being served on the lower deck for four dollars and dancing guests groove to the DJ duo Obvious Funk while the boat is still docked. 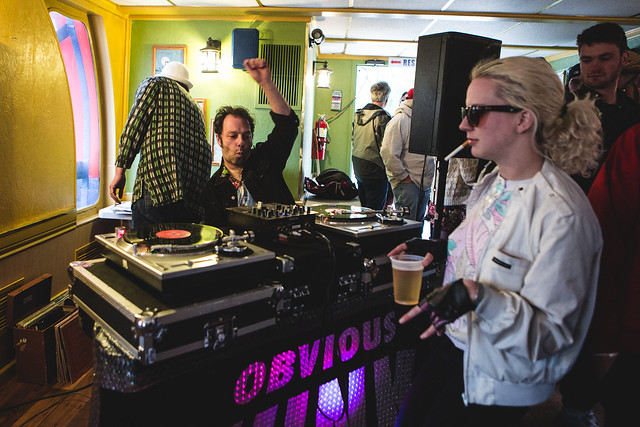 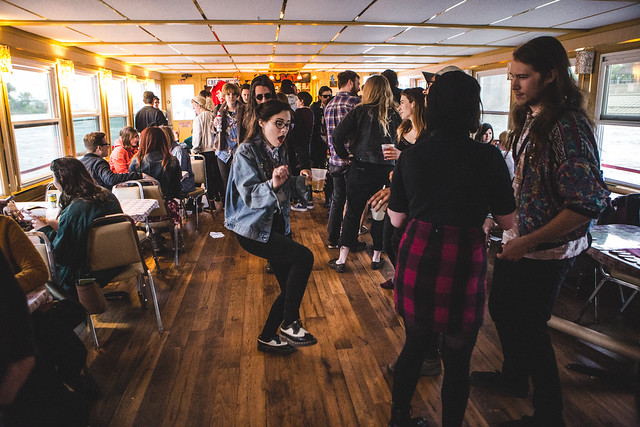 When the boat departs, a thrilled look comes over the faces of a crew full of concertgoers who joke about getting seasick during the show. Upstairs on the rear end of the deck, Omaha garage rock group Nathan Ma and the Rosettes are about to take the stage, the river as its backdrop.

During the group’s short, bouncy songs, the Rosettes keep a cool, laid back demeanor. Especially drummer Sophie Hug, whose loose and stripped down licks anchor the group through smooth tempo changes and danceable transitions. The Rosettes’ bassist Alex Kinnerk jokingly teases the crowd with several 311’s “Amber” transitions, but never quite attempts the whole song. The group does seize its cover song moment, however, when it played “There She Goes” by La’s, which resonates with nearly the entire crowd as it sings along. 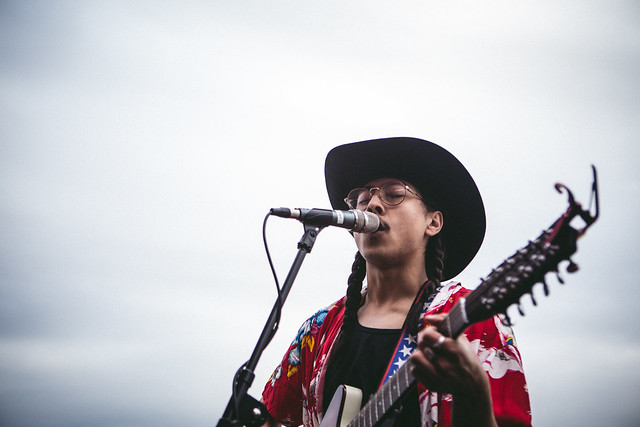 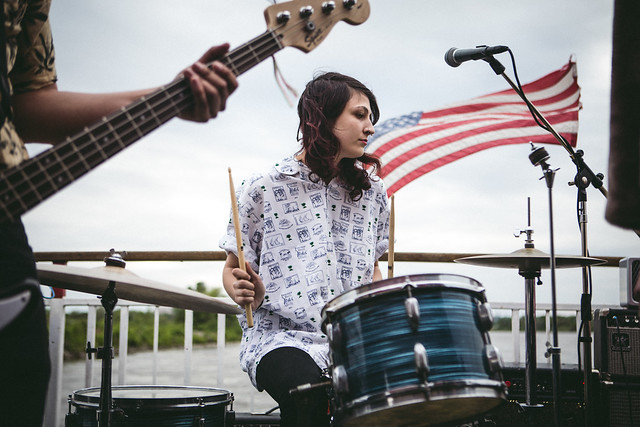 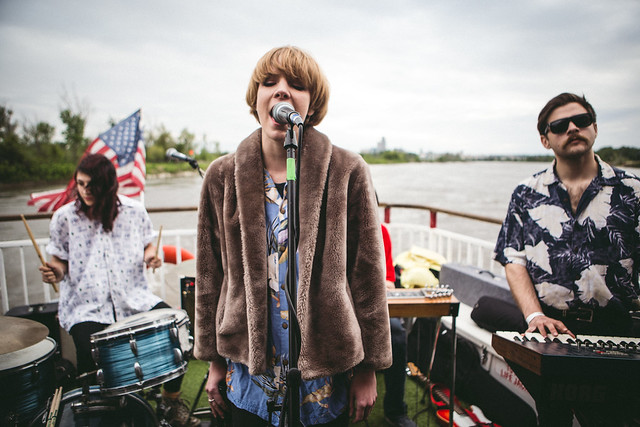 As the Rosettes wrap up their set, the Star passes graffiti filled bridges and Council Bluffs’ Harrah’s Casino, which gives the crew an idea of how far south we’ve come in just 40 minutes.

Downstairs, the line for the only bathroom on the boat feels more like a swarm of people just hanging out and smoking cigarettes, and the question “are you in line?” is uttered several times over. 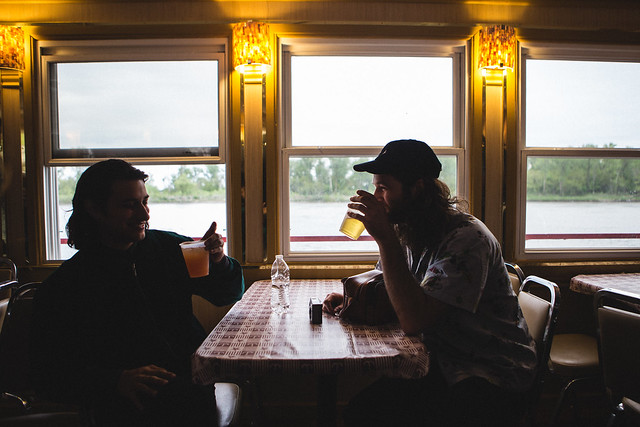 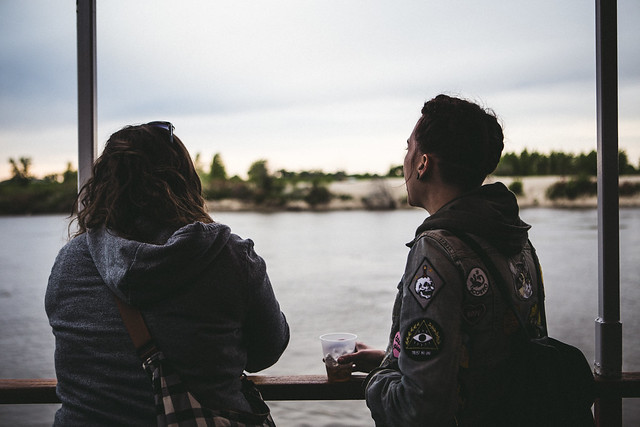 As the sun nears its set time, so does Shannon and the Clams. The dark blue horizon is seen behind the touring group that’s already made the most of its Omaha visit before boarding the River City Star. Saturday night, Shannon and the Clams performed at Brother’s Lounge with Vegetable Deluxe and Skull Fight. One would think that performing on water is more interesting than performing on land, and while the Sailin’ and Wailin’ boat cruise wasn’t the group’s first boat show (they’ve played shows before on docked boats in Europe), they had never performed on a moving boat before Sunday night’s motor-driven performance. 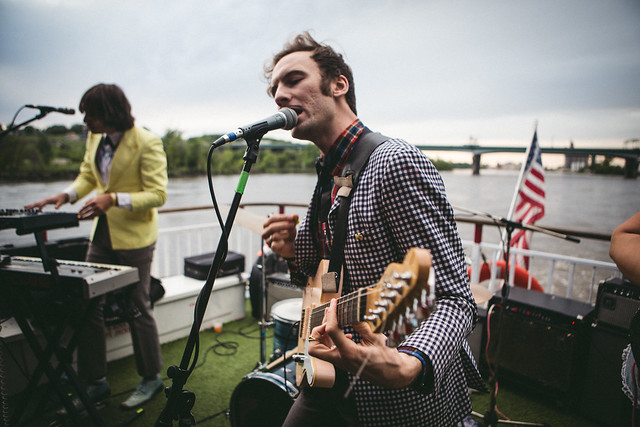 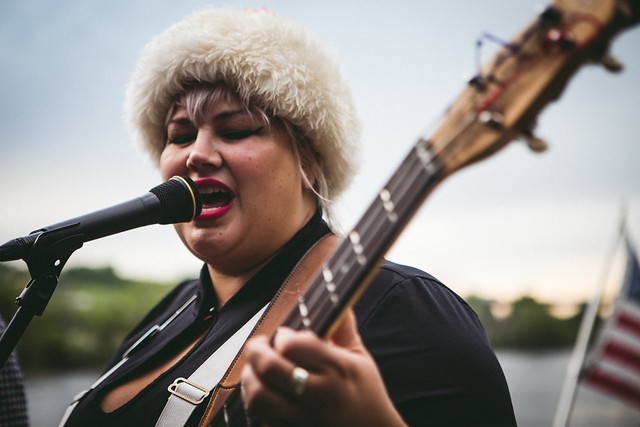 Shannon and the Clams cruises through its riverboat set with rhythmic consistency and dynamic duality. If you aren’t standing in the front few rows, it’s difficult to know who was singing which part of a song. The vocal chemistry between bassist Shannon Shaw and guitarist Cody Blanchard is impeccable, the two sounding almost like one, yet their voices are distinguishable enough to keep their vocal inclinations unique. The group’s doo-wapping, swinging songs like “Ozma” bring forth sonic elements of beach pop with subtle undertones of classic R&B. Drummer Nate Mayhem is a uniformed asset to the group’s performance, never missing a beat during a tempo change. Keyboardist Will Sprott, who is a newer addition to the group that started as a trio, shows versatility in his ability to move from keys to tamborine, adding an impressive, flavorful component to the performance. 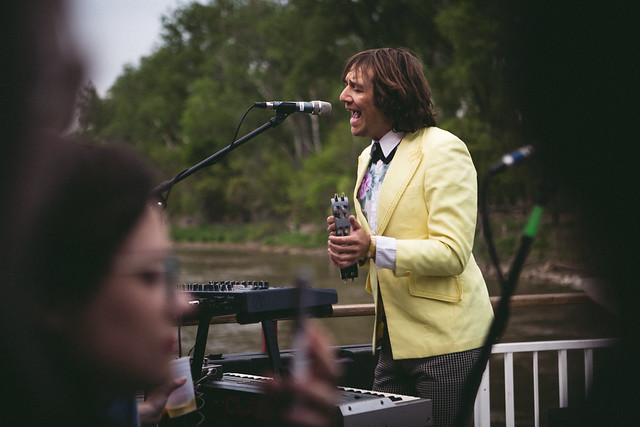 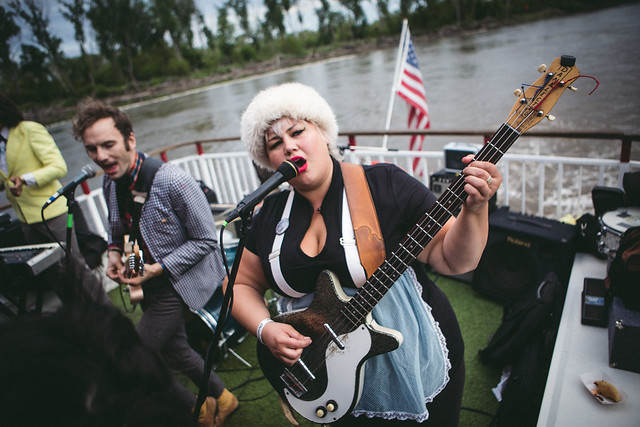 This is a group whose fashion is noticeably part of its performance, which was ultra-fitting for the dazzled, dressed up boat cruise. From Shaw’s French maid apron to Blanchard’s checkered shirt and Sprott’s bright yellow suit jacket that matched his gold-painted finger nails, each bandmates dress gave the audience an idea of their personality. Between song changes, those personalities came out as each band member entices the crowd with some kind of comment, many of which are about performing on a boat.

“Thank you all so much for being here,” Shaw said nearing the end of the cruise. “I’m overwhelmed with joy-being here on this boat with all of you.” 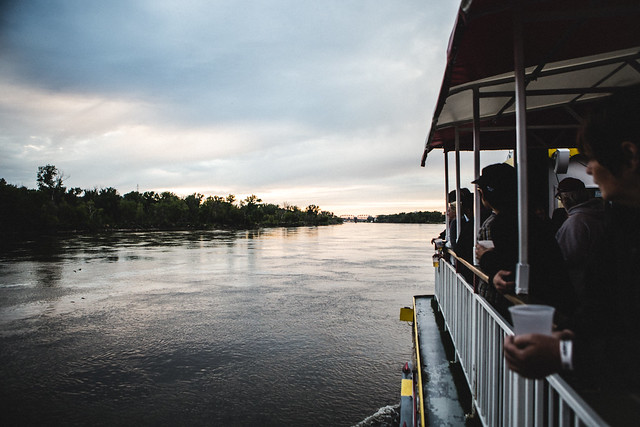 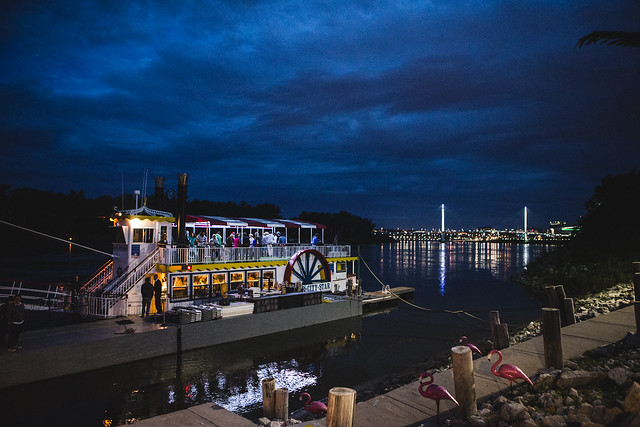 Shannon and the Clams get off stage and Captain Ken announces that the River City Star will be approaching Miller’s Landing shortly. The audience doesn’t waste time hustling to the lower deck to grab one last drink and dance to the DJs down below. As the boat docks a short fifteen minutes later, a group of people mingle toward the back of the boat, taking their time to depart the cruiser and head back to land.