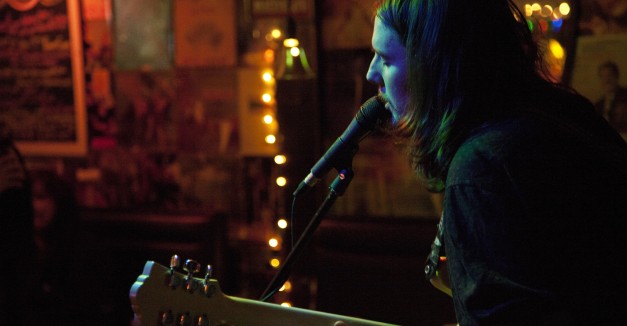 The instrumental choreography of Graham Ulicny’s solo project Thick Paint is the kind of tight orchestration more easily achieved, perhaps, alone, and especially with such pre-engineered attention to sampling detail.

In this recent performance of “Season of Change,” waves of synth pulsate and wash over the O’Leaver’s stage while a sampled syncopated beat slides in underneath. And much like with his full-band project, Ulicny is his emotive self here, his fluttering, desperate voice trading blows with sharp needlepoints darting from his guitar.

For how artificial an atmosphere can feel when constructed this way, and for how seemingly vindictive the subject matter, “Season of Change” is remarkably warm and sweeping like a summer breeze or a breaking fever. By song’s end, it’s easy not to realize its dissipation.

Started by Ulicny in 2007, Thick Paint emerged here not long after the Reptar frontman moved from Athens, Ga., to Omaha in 2014. See him perform tomorrow night at Brothers Lounge with Rogue Moon and Little Ripple ($5, RSVP here) and later this month with space_bar and Todd and Orenda Fink’s new project CLOSENESS (RSVP here).