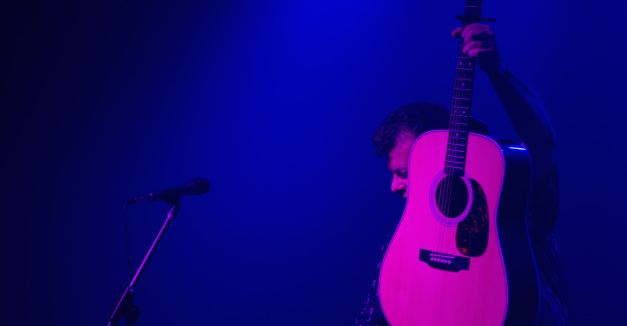 Put on Scott Severin & the Milton Burlesque’s two records, 2004’s Unknown Rider and 2010’s Birdhouse Obligato, and Severin’s youth and adult life in New York City are much more than a line in his bio.

That’s sort of the trick of seeing Severin around Omaha and Lincoln with an acoustic guitar in recent years. If there’s grime and malice and soul in his songs, it’s not the plains kind we’re so familiar with in Nebraska. It’s alleys, bars, curbs, and the whatever is running right next to them toward the storm drain.

But in soundscapes, as well, there’s a pointedness and a personality that gestures to both the punk and literary roots on the block of leather jacket-wearing poets. Put on a song like “I Won’t Get On the Plane” (from the second album), and you’ll hear a bounce, a kind of club-bound rock groove you won’t find in most Nebraska music. You might tag it as a New York sound, but it rings more broadly with a kind of energy that can feel as darkly American as anything more easily classified as Americana.

You can see Severin on Dec. 10 with Gerardo Meza at Omaha’s Library Pub. And on Dec. 19, he plays Meadowlark Coffee with Jack Hotel’s Günter Voelker. But right now, he joins us live on Hear Nebraska FM. Here is Scott Severin: