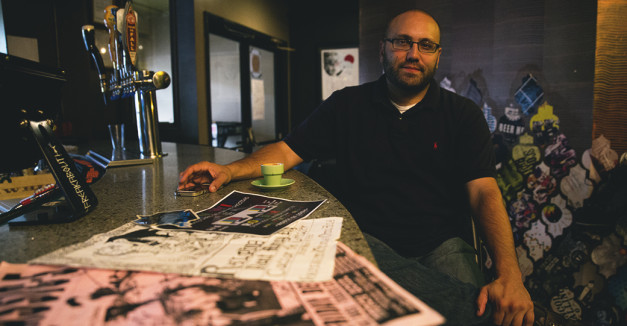 In Lincoln, the blues has a home. The Zoo Bar has been billing itself as such for decades and by extension, it has become a comfortable haven for all manner of roots music over the years. Duffy’s, lately, has offered more or less the same to rock and indie acts.

He says lack of a fertile home is one of the major hurdles for electronic music in Lincoln.

I sat down with Munson in his home earlier this week to talk exactly that.

Electronic music is not the most visible genre in Nebraska music, but there’s a thriving community. Cake Eater, Buckhunter and Darren Keen (now-Brooklyn-based) are a few names that have busted out of their own genre circles into the greater Nebraska music consciousness.

But if that’s all you know, it’s easy to believe there’s not a prominent and growing community for electronic music here.

Recently, Munson posted on his Facebook asking people for their favorite Nebraska producers. The responses are too plentiful to list here, but mentions came rushing in for artists, such as JP Goode Beats, Dojorok, Ant B, Mixdup, Nick Holden, SharkWeek and Ruby Block. (Add your favorites in the comments.)

Munson mentions places in Omaha, like 415 and House of Loom, that have become harbors for dance parties. Then, there’s valuable pop-up events, like Fitness, the monthly experimental showcase at Sweatshop. These have helped make Omaha’s electronic music community more robust.

Sitting at his desk, flanked by shelves of records, ranging from imagistic electronic producers to indie darlings, Munson speaks of young producers working out of bedrooms and basements around Lincoln. Maybe they’re gaining an audience on SoundCloud, but no one in their hometown will know their name if they don’t have a place to get out and play.

In the following Q&A, we talk about that, the need for young leadership in any growing scene, national influences on local trends and more. These are important conversations to consider for any scene that wants to solidify its presence, of course. But they are maybe even more important for people on the outside, those who don’t want to drain some of our best talents to the coasts.

Hear Nebraska: We spoke [over email] about the need for a kind of home space for electronic music, especially in Lincoln. Can you talk to me more about that?

Spencer Munson: With venues, there’s usually a niche that venue wants to go after, like The Zoo Bar. The Bourbon hits a lot of realms, including EDM, but it’s not our focus there. So the thing that I feel is lacking is that there isn’t someone who owns a venue, who is passionate about that music. In Lincoln especially, [that’s] someone that is really working toward transforming that music in art and marketing.

The cool thing about Omaha is that there are a couple spots like that. 415 has been dedicated to electronic music for probably 10 to 15 years. And that’s just a little dive techno-house club. It only holds about 50 people, but sometimes that’s the best. House of Loom has been an amazing addition. Started by guys who started throwing parties at a particular space and it got so popular that they eventually opened their own.

In Lincoln we’ve had that with Mix. There were great times in the early ‘00s. It went by its address, 1427, then it was called The Bricktop. You could go two to four days a week and there were always people there. The current owners have tried to keep the EDM format, but I don’t think they really understand it. It has to be a person who understands the music and who you’re going after.

It’s tough because a lot of time with dance music, there’s a drug culture around it and not a lot of people are drinking. Bars thrive on alcohol sales. When we do shows at The Bourbon, bar sales are way lower for EDM shows. I understand the financial side of it. It’s tough to gamble if you’re not going to sell booze.

The electronic scene here is very influenced by Denver and Burning Man. A lot of Bassnectar followers and jam bands that turned into electronic jam bands. It’s less about house and techno, those Chicago and European flavors. It’s tricky finding that scene and how well it’s going to make money for you.

We used to be very successful with the house party scene. That’s kind of how I came up. We’d start the house party at 10, it’d pop off at 2:30 and we’d go all night. It’d give a lot of young kids their time, have an after-party scene. That’s kind of died. Lincoln Police has cracked down more. As I get older, it’s harder to find college-age spaces who will let you trash their house.

HN: Do you think there’s a community in Lincoln to support a House of Loom type space?

SM: I do. House of Loom has this multi-cultural, world feel. Very open door. But it’s also a very professional and sexy look. We tried this a couple years ago at places like Marz, to have a later evening dance scene. Financially, I don’t think the owner saw it as viable as the middle-aged martini-and-dinner scene.

But I do think there’s a place for it. There’s an older crowd who used to go to The Bricktop that misses it on the weekends. So on the weekends you can get that older EDM crowd. Earlier in the night or earlier in the week, you have a very young college crowd that’s going to turn out for that glitch-burner stuff. Griz is tonight at The Bourbon and it’s probably going to sell out.

That whole Big G, Bassnectar, festival scene is huge right now. It’s moving itself into popular music. You could do it well here if marketed right.

I think a lot of people have offered to help venues here, but you have to have people who take care of their space. You have to make people feel comfortable.

HN: That’s really interesting about the sort of burner-festival scene. I wanted to ask, how have you seen national trends influence what happens locally?

SM: A lot of the festival scene is dominated by DJs anymore. Coachella, Lollapalooza, Rothbury. You see more electronic artists there, so you get the festival crowd, younger kids bringing that stuff back. A lot of kids going to Denver and getting into the marijuana scene and music derivative of that.

There’s a lack of love toward Chicago music and European electronic music. But it’s coming around. Daft Punk is a household name. People like Chance the Rapper bend the lines between hip-hop and EDM.

You’ll see Flying Lotus and Kendrick Lamar collaborations. People like A Track, who runs a clothing company, collaborating with Lex Luger, who is a ghetto hip-hop producer. You see those lines crossing and its bringing more people who listen to pop music to embrace underground dance music.

HN: Speaking generally about music in Omaha and Lincoln, the most prevalent music is probably indie rock or folk. Do you think electronic music in Nebraska has the talent pool to step to that same fore?

SM: I have to admit that Nebraska indie is pretty great. So it would be hard to say that our EDM scene is as good. But it’s growing. The problem is that there is a lot of basement producers that have a hard time finding a venue or finding an outlet for their music. They may be getting fans nationally and internationally because of SoundCloud, but they’ll have a hard time finding a place to play or getting their music out around here. It’s a little easier to go to The Zoo Bar and be like, “Here’s my band” than “Here’s my one man electronic act” and get a gig.

Though there’s some crossover. Somasphere was successful. Icky Blossoms incorporate a lot of dance music. The Faint are a huge influence here. So I guess, back to the venue thing, if these kids could get out and have an outlet, I think it could at some point reach the level of quality of local indie music.

I think you’re seeing even Lincoln producers moving to Omaha for that outlet. Cake Eater, some others. They can get more gigs, more radio outlets. There are more people there.

HN: Does The Bourbon still do Open Decks (a showcase, similar in concept to an open mic night, for start-up producers)?

SM: It kind of fell off because we were just filling random dates with it. It went through a peak and came back down. I want to make it something we start up again this summer. It’s hard to do those things in our busy season. Mix was doing it for a little bit, but I don’t know where they’re at with it now.

That was a good place for people to meet and get their feet wet, so I want to see it get back to a regular basis. Our schedule moved it to a different night all the time.

What lacks in Lincoln and Omaha’s electronic scene is younger leaders. Even designers or people who can really market themselves well. You have to be able to create your own promo materials. You used to hand out mix CDs, now it’s sending someone to your Soundcloud. It’s less personal, so I wish there was some more artistic flair and visual design in the younger people.

HN: I think that’s something anyone in any Nebraska music community would say right now — that there just aren’t many young up-and-comers.

SM: Right, with the desire and leadership to be good. There are some, but it’s easy to get full of yourself. If you have success at a young age, it goes to your head and you don’t work as hard.

HN: So what’s the next show you would tell someone to check out?

SM: I guess this is a little bit of a plug for The Bourbon, but I would say Lindsey Lowend. It has some good locals on it, SharkWeek and String Theory. That’s April 30.