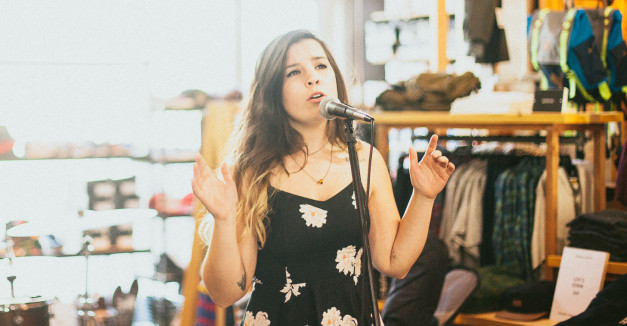 All coasting aside, Nebraska has seen a sharp rise lately in landlocked surfside tunes with instrumental surf rock bands like Huge Fucking Waves, The Sub-Vectors and Anonymous Henchmen. Tonight at The Waiting Room, Lot Walks throw its hat into the ring with a summer release.

But instead of following the tradition of instrumental surf rock, they’ve taken the tradition of surf pop so perfectly crafted by The Beach Boys, then bent into the punk stylings of Best Coast, and hit it right down the middle with their own brand of West Coast-inspired indie pop. While I don’t know that they’ve succeeded from an actual Californian’s perspective, through the pop-culture-lens of my perspective, Lot Walks knocks it out of the park.

Santa Molly is a dreamy gathering around a beach bonfire at sunset, reminiscing of sunshine, rainy days, cold winds, wanderlust and a million Gidget and Moondoggie heartthrob moments. Vocalist Jaiden Maneman sets the scene with her wistful mezzo-soprano. She has a knack for sighing at the ends of phrases that are supposed to get your heart all caught up in the moment, and for smiling through the narrative lyrics that would hold our attention captive. Still, you can catch that sassy, no-nonsense, surfer girl attitude when she means business. At the end of “We Go Somewhere,” she sweetly whispers, “Sir, I’m sorry to say this is what you get,” before she puts her foot down and stands her ground: “Sir, I’m sorry to say this is what you get.”

Maneman shares writing credits with guitarist Nathaniel Jensen, whose guitar tones and riffs act as the Moondoggie to our Gidget. A little bit older, a little rougher, tougher, a little more bleached out, a little dirtier with sand in places you don’t even know — he spends more time out in the water on his board sporting his leather jacket than on the beach.

The songs aren’t as anthemic as Phantom Planet’s “California,” but are comfortable companions when you nestle Santa Molly and the various O.C. soundtracks side by side. The songs draw from the familiar tools of instrumental surf rock with the focus on the treble, cranked to 11 from the lead, rhythm, and bass guitars, and a keen display of percussion from Jake Newbold. Newbold starts straight in on “Julian,” killing it both on the kit and some percussive accoutrement with an afro-pop vibe, much like you’d expect from Vampire Weekend’s Chris Thomson, and he never really stops delivering the chill beats.

Unlike Best Coast’s reliance on recycling the same chord progressions over differing melodies, Lot Walks’ ability to emote through riffs and hooks and solos and builds give Santa Molly its epic soundtrack feel. Each song finds me transported to different visions of the seaside. “Saratoga” feels like walking along a bustling boardwalk in the sunlight. “Know You Better” feels like best friends walking home hand-in-hand at sundown, and “CalifornIA” feels like playing Chicken in chest-deep waters beside a crowded beach. Sigh.

We may not be coastal, but Santa Molly holds up to the heat and humidity we’re all familiar with here in the good ol’ Midwest. Lot Walks’ debut album will make a great companion to all this weekend’s star-spangled plans. Whether barbequing, sunning poolside, swatting mosquitos on the banks of our various lakes and rivers, dodging bottle rockets in your car from the middle of suburban side streets, or (like me) watching The Sandlot for the umpteenth 4th in a row, enjoy your Independence Day, Nebraska. And here’s hoping Santa Molly will be just as appropriate a soundtrack to your summer as it would be to the goings on in sunny Orange County.