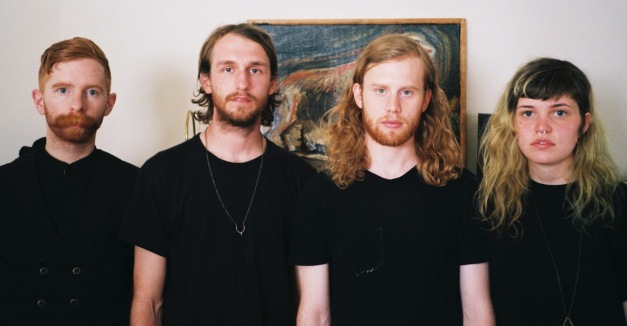 In the world of epic storytelling, disfigurement typically masks an unseen power. So it was with Zac Little’s bass guitar, the one with the “blistered and bubbling pick-ups,” barely having survived a house fire.

From one angle of the story, this bass ushered in the new Saintseneca. At the moment Little picked up the instrument, he was in a band with no members, a band that had only ever written, recorded and performed acoustically. Mimicking a version of his guitar-playing style, with power chords and emphasis on the lower strings, Little plugged the bass into a practice guitar amp with a tiny reverb tank. Writing what would become three of the foremost tracks on Saintseneca’s new album, it was more than a change of pace: It was a structural overhaul.

“I had to reconcile that new idea of writing, having this electric instrument with how we had conventionally set up,” Little says. “It was a process of those two worlds coming together. That led to the record being that more ambitious sound palette.”

Out came Dark Arc‘s “Happy Alone,” “Uppercutter” and “We Are All Beads on the Same String.” The album was released in April on Anti Records, a significant step for the Columbus, Ohio quartet.

Moreover, when Saintseneca returns to Nebraska this Monday for a show at Vega  — RSVP to the Lincoln show here — it’s a tangental homecoming for Dark Arc, which was produced at ARC studios with Mike Mogis. Saintseneca played in Omaha at the start of the month.

“It was a dream come true; I’ve been a fan of Mike’s work for years,” says Little, who spent ten months recording the original version of Dark Arc in an attic before their new label opened the door to Mogis.

In the grand and pristine A Room of ARC, Saintseneca set to work further vitalizing what was already its most complexly composed work to date. Little says the band shot for body and for a robust sound, all stemming from that singed bass.

“It was almost like I was waiting to find the bass and find these songs in it,” he says.

Its condition is fitting for the lyrical turns on Dark Arc. There are numerous lines across the album that register physical punishment and corporeal demise. You wouldn’t say it’s an album about violence, but bodies take a pounding.

“[The violence] is one facet of a broader overarching concept, which is this notion of transcendence and doom,” Little says.

That transcendence tends to register more in the feeling of the album, the soundscapes achieved at ARC. Even if the songs are run through with darkness, the bounce of Saintseneca’s many rare acoustic instruments and the open space they have to maneuver feels like a horizon. Backgrounded by such swelling — not to mention the teetering and dense poetics of Little’s lyrics — a punch in the face is a drop in the pond.

“I like that idea of going on with your life and having a certain level of joy in the face of knowing that all that’s going down anyway,” Little says.