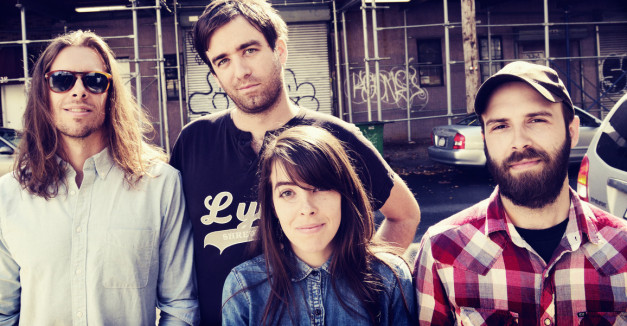 On May 29, Hop Along was playing two shows in Seattle: their regularly scheduled tour stop at Chop Suey and a 25-minute live gig for KEXP.

The immediate question, then, was how singer Frances Quinlan’s voice would hold up. Since the release of the Philadelphia band’s sophomore effort, Painted Shut, on Saddle Creek last month, that voice has been lauded for its dangerous and beautiful undulations. The thematic climax of most Hop Along songs is Quinlan toying with a breaking point in her vocal cords and in the stories she’s weaving. How was two shows in one night going to go?

“You know, it freaks me out, but I’m going to do my best,” she says on the phone from the van.

It’s the sort of uncomfortable, and slightly grave, modesty that dots the entire interview. Quinlan says she finds her one-of-a-kind rock voice (critics’ words) “really limiting at times” (her words), and that many people criticize the way she uses it. That’s a sentiment I’ve yet to find in any review. But this might be an easier manuever than admitting you made an electric record that’s frighteningly detailed and emotive, all while being pretty catchy rock.

When Hop Along comes to Slowdown’s front room tonight for $10, its first time through since The Sandbox in 2012, it’ll be quite the notoriety juncture at which to catch the band. They’ve almost universally won the affection of national critics, even if the indie music public hasn’t quite caught up. For one example, just yesterday, the popular sports and culture website Grantland did a feature on Hop Along for no other apparent reason than the staff likes the band a lot. And, today, Quinlan is doing an interview on Lincoln’s community radio station, KZUM.

Offering pleasant, but biting, rock, Hop Along’s songs are disorienting even when the soundscape is not. The ten tracks on Painted Shut are bound by a penchant for lyrical feints: kicker phrases that sneak into the verse just as its rhythmic door is closing. Or maybe shapeshifting, and sliding underneath the phrase’s conclusion.

Arguably, the most daring example on the album is the bare and acoustic “Happy To See Me” when Quinlan’s third verse introduces a father posting a motivational video on YouTube. Her voice ducks out of frame and then swoops avianly upward when mentioning the name of the online giant. It’s half-bashfulness about a coporate plug and a half-genius use of the goofy assonance in “Yoo-toob.”

The sense of danger in the vocals isn’t just the scratchiness and the volume, but how closely it lives next to her falsetto, the most delicate part of a vocal register. Quinlan says last year’s throat check-up with the ENT went well, and the band is careful not to stay on the road too long without a break, in part because she doesn’t want to wear it out.

“So far so good. I don’t know what will happen in the next few years, but we’ll see.”

But she indulges almost nothing in talking about the aesthetics of her voice. She sees the way she sings as inextricable from the swings, crawls and detonation of the lyrics.

“The parts that I think of as choruses don’t seem to correlate to other people,” Quinlan says when I refer to the songs as not having choruses, but rather massive exhales at their ends. (See “Texas Funeral” or “Waitress” or “Happy To See Me.”)

The stories she unravels seem fixed on isolation, not so much about being alone as purveying the vulnerable and hideous feeling that everyone is. And that’s no doubt enhanced by the glaring absence of harmony vocals.

When the lyrics do draw on the unison of people, it’s in harsh declarations of “common poverty” or having “a great wanting in common.” Lest you mistake those phrases for implying a bit of empathy or social unity (as I did), Quinlan’s explanation is bleakly existential.

“Both [uses are] attributing to a kind of greed,” she says. “Wanting without cease. The common poverty is … dissatisfaction. Those are all rooted in the self, a poverty of the self. You want because you yourself are an empty being.”

Lead singles “Powerful Man” and “Waitress” were the first times Quinlan says she’s “spoken clearly” about herself in songs, two tracks anxious with shame, but with all the incidental inhumanity and humanity of a Camus story or a Mad Men narrative tangent. (Though that haunting feeling of incident lives strongest on “I Saw My Twin.”)

Quinlan says “Powerful Man” recounts her “being a coward,” though the song levies no such judgement. It’s an autobiographical story of watching a father hit his child in public from her bystanding perspective.

It’s tempting, too, to find the ways Hop Along fits in with Saddle Creek’s stable. In Pitchfork’s review of Painted Shut, it asserted the label is “built on the kind of romantic, middle-American indie that made Hop Along possible in the first place.”

But there’s no such romance in Hop Along songs, though it might take a lyrics sheet to prove it. The songs seem to occur suddenly from eyes and mouths that could be real or imaginary, from any place or recent century. If there’s a lyrical link to Kasher or Oberst, it’s not in subject matter or style, but in the consuming feeling that Hop Along’s voice is talking, undeterrably, right at you.

Quinlan says her youthful discovery of Saddle Creek was influential to her experience of music as a career and industry, telling Noisey one of her Saddle Creek favorites was the relatively obscure 2001 Bright Eyes/Son Ambulance split.

“[Saddle Creek] was the first label I looked at as not just a business,” she says. “I found out that there was this group of friends in Omaha who’d started a label. I’d never heard of anything like that.”

She says coming to terms on the signing last fall was easy.

“[Saddle Creek] is friends with the bands on their label,” she says. “I think someone let it slip to [label chief] Robb [Nansel] I was big fan, anyway, during negotiations. But it wasn’t me.”

[Correction: The interview with KZUM’s X-Rated Women In Music ended up being cancelled.]