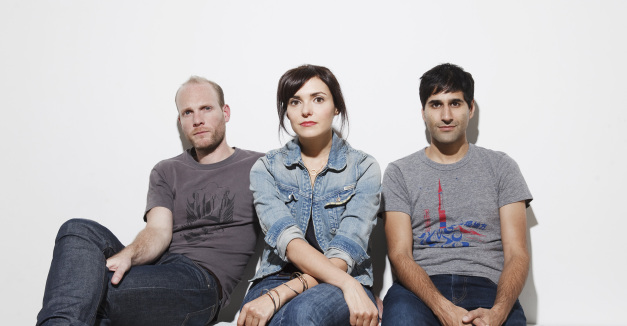 Still, the prairie province permeates both Edenloff’s mind and the music he makes.

“The more that I realized that, as much as I had left Alberta and wanted to have a new life,” Edenloff says, “growing up and remembering those memories defines who a person is to a large degree.”

Indeed, the major touchstone in RAA’s music, band name aside, is a bucolic sort of longing. Edenloff says that the songs on September’s Mended with Gold, the band’s third Saddle Creek release, are, more than ever, inhabited by a sense of love and loss.

Mended with Gold sees the band upping production chops. The harsh folk sounds bigger than it ever has on record before, casting the trio as a second cousin to folk-pop giants like Lumineers and Of Monsters and Men.

“We wanted to stretch some muscles and prove that we can sound as big as the live show,” Edenloff says.

For that, they brought on Matt Letterman to record the album. Letterman has done live sound for the band since 2010.

Despite the larger production sound, it’s still unmistakably RAA. The trio didn’t fill out their instrumental arrangement for the album at all, it remains: vocals, guitar, keyboard, percussion. Edenloff’s voice is as unmistakable as Conor Oberst or Jeff Mangum.

And, as always, there is the feeling that these songs live in a distinctly rural space to spread out.

It’s in the imagery: “I’ll fly into your rust-colored coop, I don’t know what we’re gonna do” Edenloff nearly mumbles on “This City,” a small couplet before the song explodes into a wall of persistent drums, keyboards and full chords. It’s the kind of imagery that lives within the levees of experience. You trust that Edenloff has seen that chicken coop rusting away, an insignificant dot in a vast tallgrass prairie.

“A lot of those songs and images and point of view were kind of from homesickness,” Edenloff says. “I tried to recognize what made me me in a way, that I had my own perspective on things.”

And in the music. Edenloff’s gravelly vocals strain to soar over bare guitar chords and it sounds like a bitter winter wind whipping across the land with few trees or buildings to slow its progress. It’s the kind of wind that keeps you pleasantly inside, thankful for warmth and walls. Keyboardist and vocalist Amy Cole’s voice howls gently just behind Edenloff’s, her keys

“It’s impossible to be Canadian and not be impacted to a certain degree by the landscape around you,” Edenloff says.

If there is something urban, something Toronto to RAA’s music, it must be in Paul Banwatt’s automatic percussion. Except for moments where Edenloff is given all the space, Banwatt spills into every corner of the song with drums as quick, precise, unrelenting as factory machines.

Edenloff acknowledges the presence of these rural suggestions in the music, but he might call it incidental. He says he just makes the music he likes, that he naturally makes art that’s close to the life around him.

“It’s all those memories and the places, places you’ve seen, stories you remember,” he says. “They in some way build this large picture of who you become.”