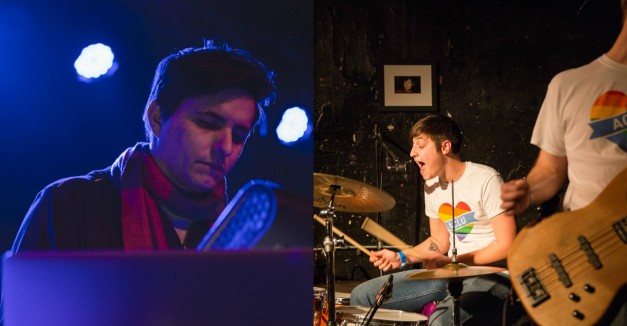 With the holiday break (and the rain, we hope) behind us, this week’s Hear Omaha and Hear Lincoln shows take us into the stretch-run of our summer concert series.

At 13th and Howard on Thursday, the Omaha electronic act Routine Escorts will perform. [RSVP here.] Below, we talked to chief compositional duo Thomas Flaherty and Jon Tvrdik about the increased focus and exploration on last year’s Good Lies EP. They tell us Thursday — their first show this year — will mark the debut of a “slimmed down” live style.

At 13th and P on Friday, one of Lincoln’s enduring acts, the punk trio Once A Pawn will play Hear Lincoln. [RSVP here.] Below, we caught up with drummer/singer C Balta on the band’s recent outings with progressive and political t-shirts, as well as the musical maturity digging in on its most recent record, The New Nude.

See you Thursday and Friday at noon.

Hear Nebraska: If we were looking for any musical strand from Back When to Routine Escorts, what would it be? Our guess might be: how much song-scope can be expanded around melody.

Thomas Flaherty: I mean I feel like that’s what makes Jon and I work together so well, we’re both obsessed with melody and tinkering/torturing it until it’s a completely different beast.

Jon Tvrdik: The writing process for some of the melodies is very similar to Back When. In both, we began with interesting movements and melodies on guitar that then, in the case of BW, expanded with the addition of more instrumentation. In Routine, it’s more about getting that melody into midi then playing with notes, chords and groove to escalate the playing of the melody to something we would not have organically come up with on our own. That’s the challenge and the fun — the evolution of melody.

HN: Was it a deliberate decision on Good Lies to punch up the “drums” and beats, and orient the songs more around percussive elements? It works on “Stop” to such great effect.

TF: 100 percent. Grown-Ups somewhat acted as a proof of concept: Can we write together, can we perform together, what does that look like? It was coming up with a formula that works. Good Lies was essentially us saying, “OK, we know this works, now how do we expand on it?” A big part of that was drum simplification and reimagining. I love house music and Jon loves pop music so we wanted our percussion to sort of reflect that duality.

HN: Producer on the two records, Clark Baechle obviously has a wealth of experience with electronic music. What’s something special about his producer’s ear?

TF: I’m still fairly new to mixing and what not. So it’s been insanely important to me having Clark around and really just watching, listening and learning from someone who’s had close to two decades of experience.

JT: Clark and I have a similar process when it comes to analyzing a mix — we both think about what’s missing or what doesn’t feel refined. Are there too many breaths here or does that sound carry on too long? We’ve been friends for years, so it’s a shared appreciation born over conversation and honed through working on a few records together [Back When, Fathr, Routine Escorts].

TF: Our Hear Omaha performance will be the first with a new slimmed-down set up that lends itself better to improvising and jamming. This new set up will act as the foundation for the next batch of tunes, as well.

JT: Our live set is getting more into the realm Tom loves, the improv-house side of it. I’m excited about this because I feel it’s a new territory for me personally, so I’m all for it. As for music release, we are hoping to put some new jams out soon.

Hear Nebraska: The last couple times we’ve seen you all live, you’ve been decked out in the same t-shirts. Is that Screen Ink’s influence?

C Balta: Kind of, because otherwise I may not have known about the shirts if I didn’t work there. But the meanings behind the shirts are why we wore them. For Lincoln Exposed this year we wore shirts that the ACLU (American Civil Liberties Union) had made in support of their work for marriage equality in Nebraska. Being that I am a member of the LGBTQ community and both Eric and Mike are huge allies, we wanted to show our full support in the freedom to marry who you love . . . and wear some sweet rainbow heart t-shirts.

The other shirts we’ve worn together are t-shirts that read “ju suis, Pete” in French, under an image of a pig with a bag of money in its mouth. The shirts are in regards to the current governor of Nebraska, Pete Ricketts, whom we are very humiliated and frustrated by as a human being and the leader of our state.

HN: In the growing Once A Pawn discography, what’s an old song you still have a soft spot for, and might dust off for a show? (And why?)

CB: I will always have soft spot for the song “Subtle” because it was one of those songs that was a challenge, but I was so excited about writing it. Ever since Eric played me the early stages of the song, I’ve thought it was one of the catchiest songs we’ve written together.

HN: The New Nude is full of what I’m tempted to call “mood breakdowns,” where the songs dip into a valley for a bit with some brooding drums and guitar noodling before we rise up back into the hook. It’s a really deft alternative to more start-and-stop playing. Can you explain where that compositional wrinkle comes from?

CB: I think that The New Nude shows how we’ve been evolving as a band in general, but also since the addition of Mike on the bass.The album prior, In This House, included Mike on bass, but about half of the songs we’re written before he had joined the band. Having Mike on the bass has definitely added an element that helps ground us and, I feel, has allowed Eric and me to open up a bit more in what we are doing musically.

CB: We’re busy writing, so we’ll be starting to play some new ones here an there at our upcoming shows. We plan to continue playing shows in the Lincoln/Omaha area and have a new album to release by next year.

Editor’s Note: These Q&As have been edited for clarity and concision.