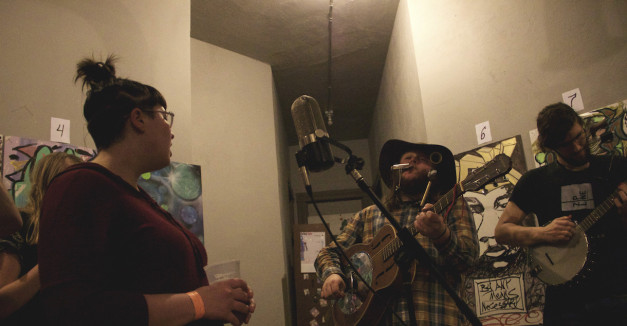 Of the ten diverse acts that have played and will play Hear Lincoln this summer, each appears variously comfortable outside in the open air and noon-day sunshine.

For Root Marm Chicken Farm Jug Band, the corner of 13th and O streets this Friday is as good a street corner as any to shuffle out their busk-friendly traditional music. With a suitcase-centric drumkit, kazoo solos abound and a buzzing glass jug, the band’s origin story, in fact, launches from a weariness of indoor rock stages and electric instuments.

HN: What was your first public show in Lincoln, and how did it go?

Root Marm: Aside from busking on the streets of downtown, our first public performance was a benefit concert for UNL’s Microfinance Club two years ago. Our banjoist Matt and drummer Josh were both members of the club and raised money to give zero-interest micro-loans to entrepreneurs in developing nations. We were booked with rock bands at a downtown club … we set up at the back of the room and while one rock band tore down and another set up on the main stage, the jug band with some meager old tube amps and a few shared microphones, rocked the house via the dance floor! It felt right to be in the midst of the audience. Before that moment, we had only jammed in a living room. I think we have the most fun when we play right next to a dancing audience. House shows and other intimate atmospheres make the music work, a reason we like to busk.

Root Marm: We play a lot more bars, and we are starting to get requests to play gigs we never thought we would. For example: last year we played the Ogallala Rendezvous, a big street festival in downtown Ogallala. They paid well and treated us great. It’s wild because we don’t even know how they found us. The same was true last month when we played at Lauritzen Botanical Gardens’ plant sale. These gigs go beyond what we predicted for a pick-up group of friends wanting to learn traditional music. The original group has gone through several changes, but the core of the group is still here. People come and go and the lineup is rarely the same from gig to gig, but the energy is still there, no matter what, and the goal is still to have fun.

Ian Egenberger: For me, its probably listening to my great grandpa, Bob Craig, play his fiddle for me and my sister when we’d go visit him. That left an impression on me for sure. I got a toy violin when I was two years old, but it didn’t have a bow, so I used a shoe horn and raked it over the strings, just like he would do when he played. I think there is a picture of that somewhere. Anyways, my dad was always really into music too, and as a little kid I loved to sing. I know that the animatronic singing animals at Showbiz Pizza (especially Billy Bob, the overalls wearing, moonshining, guitar playing bear who headlined for the franchise) were early musical influences as well.

Kyle Bruggeman: My earliest memory of discovering the joys of music comes from when my mother would play a “C Is for Cookie” record in our living room.

Josh Kornbluh: I remember being six, listening to the Lion King soundtrack in our living room back in New Jersey. My dad was trying to teach me to tap my foot to the beat, but I just didn’t get it. Seventeen years later, I seem to have figured it out.”

Matt Wynn: I got a bamboo recorder in a gift bag from my cousin’s birthday party. My dad was playing bits of a Stevie Ray Vaughan guitar solo and pausing it to have me play it on the recorder. I was doing as good of a job as an eight-year-old could, but my dad had had a few and said it was perfect.”

HN: In that Hear Lincoln is a downtown, day-time event, we want to ask … do you think there is a disconnect between Lincoln’s creative community and business community?

Root Marm: Lincoln has always been a strong supporter of the arts and making art available to the community. However, there seems to be more of an effort to create a scene for national acts as opposed to featuring local artists.

Ian: As a guitar player, learning to play at the right volume took some time and a lot of patience from musicians who had been around for a while, and knew how to control their stage volume. That is a common issue for a lot of bands, since they make guitar amps so loud these days, and to try and balance the guitar with the volume of the vocals can be hard, especially when your amp sounds best cranked. That is why I mainly use old small tube amps. They give the right amount of stage volume and you get that great tone just not so loud that you are killing your bandmates’ ears. People who want to see your band also want to hear the lyrics, so it doesn’t make sense to drown them out with a blaring lead guitar. By the same token, learning to sing correctly (or at least more correctly) and project sufficiently has been another area where guidance from experienced singers has helped me greatly.

Josh: I learned the word ‘meretricious’ by playing in a group that exemplified it. Basically learning to play something that benefits the whole sound instead of just trying to showcase your own abilities. The thing that sounds good is usually not something that requires a lot of chops … it mostly requires taste, and taste is always developing.

Ian: For a beautiful, tear-jerkingly sad, but hauntingly-awesome song, check out “Throwing Pennies” off Jack Hotel’s new album Good Sons and Daughters. The whole album is great, but that’s the song that’s been getting in my head a lot recently.

Kyle: Check out “Hot Cakes and Sorghum” by Preston Love on his album Omaha Bar-B-Q. A hard-to-find album, but YouTube has plenty of tracks.

Josh: Haha, my other band is Handsomer Jaws. We just put out an EP that you can listen to for free here.

Matt: Sing to yourself in the shower.

Reach Hear Nebraska through its managing editor at chancesp@hearnebraska.org.