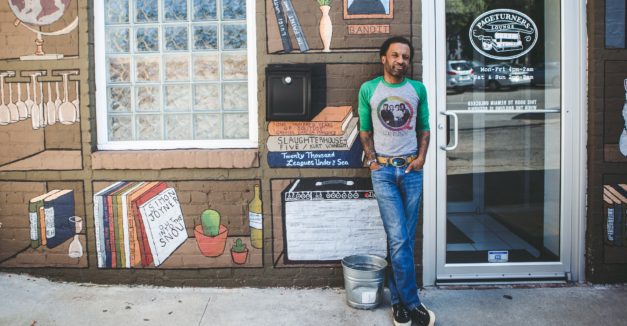 [Editor’s note: The Good Life — one of the many projects in which Roger Lewis is involved — plays O’Leaver’s tonight with Jake Bellows and Field Mouse. $10, 9 p.m., 21-plus, RSVP here.]

It’s late afternoon on a hot July day at Pageturners Lounge in Dundee. Roger Lewis, the prolific drummer, DJ and musician of such ground-floor Omaha projects like The Good Life and Neva Dinova, is preparing to drive to the Capitol building in Lincoln.

A protest sign rests on the bar. Just a few days before, two young African American men, Philando Castile and Alton Sterling, were killed by police in separate incidents.

“I just want to be thought of as a positive black man that’s trying to do right,” he says near the end of a nearly two-hour conversation, “People can identify me, where I come from, and know that I am trying my best. That’s all I want.”

It had been a busy day for Lewis. In the midst of our conversation, he was preparing a tour of clubs and venues in Germany under his soul and funk DJ stage name Tyrone Storm, after which he would venture out on a U.S. tour with The Good Life. He was preparing Pageturners to open for the night. And he was to meet with friends to participate in that evening’s Black Lives Matter protest in Nebraska’s Capital City.

But being busy — places to be, people to talk to and music to make — is a natural state for Lewis. He is bubbly and energetic in spite of his workload. He smiles, laughs and ponders dutifully as he speaks. 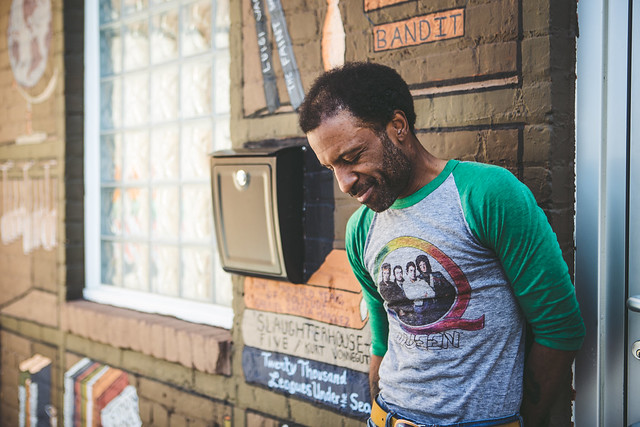 Lewis’ career in Nebraska music spans decades. His start came in in 1994 with Grander, a short-lived rock and roll band spawned out of Lewis and his friends’ common desire to make music.

“The great thing about Grander was that myself, Jason Ceiling and Kenny McNeilly were all black, and that was awesome,” Lewis says, “It was unique to have a trio of blackness playing rock and roll.”

After two years with Grander, which included a run on Crank Records, Lewis moved to Olympia, Wash., due to his passion for northwestern rock and grunge.

“I was obsessed with everything northwest rock and roll,” Lewis says. “I love Nirvana, Bikini Kill and Riot grrrl, Sub Pop records. I loved it all.”

After a year in Washington, Lewis moved back to Omaha and bounced between projects with his friends.

Lewis is perhaps best recognized for his major contributions at the drum set to the indie-folk and rock wave in the early 2000s. Lewis remembers first touring with Bright Eyes just before the Omaha titan released Fevers and Mirrors.

“You could tell something happening,” Lewis says. “There was a lot of talk and the shows were well-attended. And then Fevers and Mirrors came out and everyone lost their minds.”

It was during those early Bright Eyes tours when Lewis met Cursive frontman Tim Kasher, who asked Lewis to join an unnamed side-project that would ultimately become The Good Life. He was in disbelief.

“First of all, it was Tim Kasher and he was asking me to join a band with him and I couldn’t really believe it was happening” Lewis said. “I said yes without really thinking about it, because it was like ‘yeah I’ll play with Tim Kasher!’ and after I went home and I thought about it I thought ‘What did you just do?’” 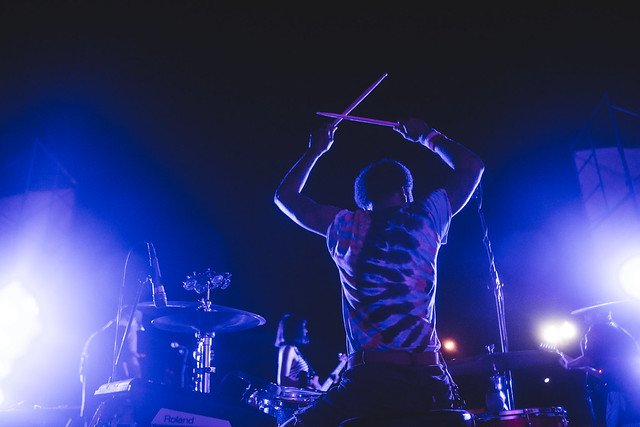 Lewis says he “talked himself down” and was confident in his ability to hang in the new project. They went on tour in the fall of 2000 and Lewis has been part of that band ever since.

When he wasn’t working in The Good Life, he was frequently beckoned by Jake Bellows of Neva Dinova for his skills. Eventually, Lewis remembered, Bellows invited him to tour with the band. “Fuck yeah,” Lewis remembers thinking.

“Both of those projects were pretty intense,” Lewis says, “It was like, go on tour with Good Life, get home for two days, go on tour with Neva Dinova. It was a long cycle of never-ending touring but I would not have it any other way. It was one of the coolest experiences.”

The Good Life went on hiatus in the late 2000s, and in the meantime Lewis continued to expand his musical reach on the Nebraska scene. In 2009, he helped start Conduits, which included the likes of The Mynabirds’ Jenna Morrison, Cursive’s Patrick Newberry, See Through Dresses’ Sara Bertuldo, JJ Idt and Nate Mickish.

“We did some really cool stuff, I am really proud of that band” Lewis said.

Most recently, Lewis has been busy with his newest project, a dream-pop outfit called Oquoa which recently released its first cassette In Oneir in May. He also DJs in his limited free-time as the aforementioned Tyrone Storm, spinning old-school funk and soul at venues and clubs across the city. Lewis even drums with Oberst and a cast of Omaha players in country cover band Dolores Diaz & the Standby Club.

It’s safe to say, then, that Lewis has made a considerable impact on the Nebraska scene. He has played in bands new and old, across waves and generations and transcending genres. He is a staple that any frequent show attendee in the state is sure to recognize, if they don’t already know him. Those that do know him as endlessly friendly. And as part of Nebraska music vanguard over the last 20 years, Lewis says that he has noticed new changes to his own music making and to the scene. 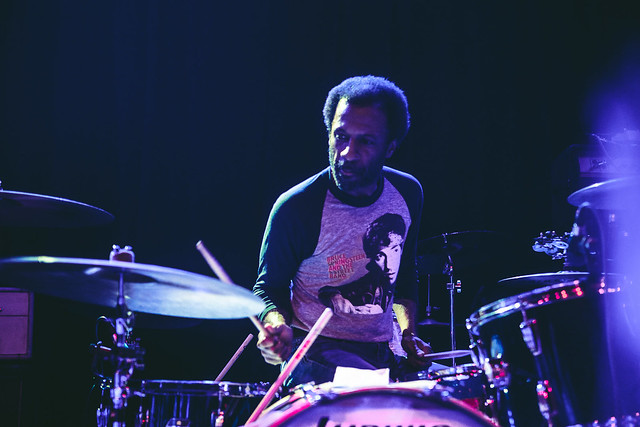 Lewis says he has always pushed to extend the Nebraska music narrative beyond just indie-rock, folk and Americana.

“A lot of people would think of Omaha as a folk-scene, and then Conduits came out and it was the exact opposite,” Lewis said, “I go out of my way to squash some of those perceptions about Omaha because it’s not true more times than not. That music is great and I love it, but there is more to Omaha than that.”

Lewis also emphasized what it meant to him to be a black man in rock and roll. At a recent show in Austin, Texas, a fan approached him and thanked him for being a black role model for aspiring rock ‘n’ roll players.

“That’s the kind of thing that makes you feel good,” Lewis says. “I take great pride in who I am and where I come from, and someone recognizes that we are struggling together, and they’re not alone, and it’s not as hard as you think it’s going to be. Someone is out there that’s going to have your back.”

And Lewis says that across the generations of music, he is always trying to tap into and help those trying to get into the music scene.

“There is always this new batch of hungry kids,” Lewis says, “I remember being inspired by young people and I want to be a part of that. You want to root for them and offer any help you can. I always say, I’ll make a phone call, I’ll play a lick for you if you need it. I believe in you.”