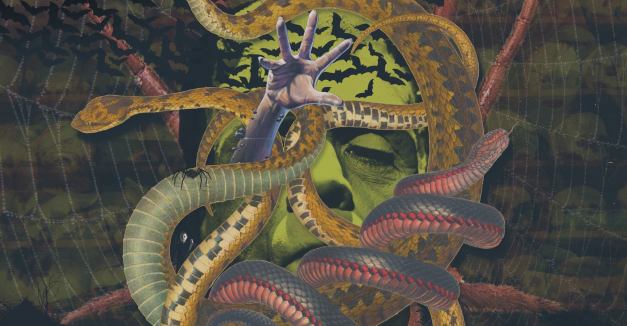 Cue the horror movie music. Spooked, you begin to run, and embark on the creepiest, most disturbing journey through the woods and into a fun house. Idiosyncratic pulsating, haunting organ and strange voices surround you. No matter how fast you run from room to room, there is always something waiting to leap out at you.

With your eyes clamped shut, you may have forgotten that this is all in your mind. You are not in a haunted house, an abandoned cabin or a deserted forest. You are sitting in your living room, in the dark, with your headphones on. You are listening to the latest ROAM audiozine, Are You Afraid of the Roam. In all likelihood, you are terrified.

When ROAM’s curator David Matysiak tries to classify the monthly audiozine, he rambles for a bit. What do you call an amalgamation of experimental recordings from as many as 16 artists, spliced together into a 20-minute aural adventure? A podcast? A sound collage? Noise?

“Think Radiolab minus all the talking heads,” Matysiak says, finally landing on an elevator pitch.

Simply put, ROAM is a monthly experimental audio project created by Matysiak, concept designer Devin Brown, engineer Mason Brown and designer Jordan Noel. Each about-20-minute episode comprises sample recordings from various contributors — Cursive’s Tim Kasher or Black Lips’ Cole Alexander, for examples —  which are pieced together by the crew into a deep, engaging soundscape. Through sound, the aim is to take the listener’s mind to a newly created environment.

Or, as the tagline neatly puts it: “For your ears to see.”

“Everyone is familiar with visual art, and how easy it is for a painter to sit down with an easel and start painting, because they can see it,” Matysiak says. “With sound … there’s a lot of grey area that no one is really playing with.”

ROAM initially began in 2009 as a year-end compilation project for Matysiak, then a resident of Omaha, now Atlanta. A product of holiday restlessness, it was called “ROAM for the Holidaze,” and was released on his label/recording collective CoCoArt. Matysiak gathered recordings from friends and fellow musicians to assemble into a kind of sampler recording.

At first, it was simply a hodge podge of recordings without a narrative or overarching theme. The fifth installment of “ROAM for the Holidaze” was a found-sound edition that the ROAM crew felt brought out the best in their contributors.

“For the first time, [we] started talking about threading [tracks] together into one long cohesive thing that had its own identity,” Devin says.

The Atlanta residents are no strangers to artistic endeavors. Matysiak works at Adult Swim, Cartoon Network’s late-night programming branch, contributing voices, copy and animation for videos on their website. Noel works with bands — Manchester Orchestra, the Whigs, and Counting Crows, to name a few — doing album covers, merchandise, music videos and short films. He also designs for restaurants (5&10, the Florence, the National, Empire State South) and shoots films and documentaries (including the award winning narrative short film Rooney’s World). Mason is both a web developer and sound engineer. Devin works for the Emory University library system.

And they have all played in and toured with numerous bands and music projects. Matysiak and Mason played in Jet By Day from the late ‘90s until 2006, with Noel as their roadie and tour manager. Mason works on his own guitar drone project called Brainworlds, and has spent time as a touring guitarist with Maserati, Tilly and the Wall, and Icky Blossoms. Devin founded and directs a cave art collective called Speleogen. All of them have performed with Matysiak’s solo project Coyote Bones at some point, and they all currently play together in experimental music outfit Boating.

“When all of these cooks get into the [ROAM] kitchen, all sorts of stuff starts going crazy,” Devin says.

Heading into 2014, the guys planned monthly releases of the podcast. They brainstormed roughly 50 ideas and whittled them down to 10 themes they felt would inspire creativity in the minds of their contributors. Their output each month (which we’ve featured regularly on HearNebraska.org) has since evolved from compilation to fluid, conceptual journey.

Each monthly ROAM begins with a theme or idea: family, love, laughter, spirituality, the wild, the unconscious. The team comes up with an outline for the finished product. From there, they send out a mission statement to (mostly) hand-picked curators that details what they are looking for.

Everything is controlled, from themes to deadlies to details they send to contributors. Devin says that with sharper, more specific instructions come more focused, interesting pieces that also fit their narrative goals. He compares their artistic directives to contributors to manipulating the force of running water through a hose.

“If you just let it run, and you haven’t put your thumb on it, it doesn’t really have any trajectory,” Devin says. “But if you can constrict it in the right type of way, it will shoot out with more force.”

The crew is very deliberate in selecting contributors, and they vary based on the mood or theme of the podcast. A quick scan of artist credits reveals some well-known artists around the Omaha and Atlanta music scenes: Todd and Orenda Fink, Tim Kasher, Reptar’s Graham Ulicny, Black Lips’ Cole Alexander and Jared Swilley, former UUVWWZ guitarist Jim Schroeder have all contributed recordings to the audiozine.

Pieces come from all over the sonic spectrum: tribal drum beats, messy guitars, rhythmic chanting, horrific screaming, religious ceremonies, footsteps, electronic noises and jungles both literal and urban. Inside their set of parameters, the contributor has ample creative freedom to build their unique piece of the collage.

Next, Mason sets to work sweetening the audio, at times blending, distorting, or melding pieces to fit the narrative. One of their challenges lies in grafting an unexpected contribution onto the script. Sometimes the intended flow of the finished product is tweaked due to an outrageous or surprising piece.

“We have ideas right when it starts, but you just never know what kind of animal it’s going to turn into,” Matysiak says.

Between engineering the pieces, communicating with all of the contributors, conceptualizing and completing art work and storyboard, ROAM often requires 16-hour marathon work sessions leading up to its release.

Recently, they say they’ve improved at creating a foundational track for each ROAM to follow, which shows up during the smoky shamanistic experience of September’s “ROAM Om.”

To follow that example, it starts with the lighting of the pyre as the listener follows the guide through private rituals and religious ceremonies in celebration. The experience takes a dark turn through evangelical rhetoric and fire-and-brimstone sermon. Then, the quest reaches a fiery climax, then drifts back down into towering hymnals. They give way to wind chimes and chirping insects as if the listener has just awoken fireside one early evening from a psychedelic dream.

“ROAM Om was, honestly, internally, the first time where all of us looked at each other and said, ‘Wow. I think we did it,’” Matysiak says.

Just as the contributors are given boundaries, the accompanying vignette serves as a guide for the listener throughout. Still, as with all ROAM episodes, the environment into which audiences arrive allows them to encounter whatever the imagination brings.

The experience can be both extremely personal, when listening alone, or communal when listening with others. The ebb and flow of sound and intensity can help conjure images for the listener, like a smokey campfire circle or an abandoned cabin in the woods. As with Are You Afraid Of The ROAM?, they can create a collective experience of terror.

Regardless, ROAM demands undivided attention. The finished recordings are extremely dense, and with little-to-no resemblance to anything melodic, they really require complete immersion in the piece in order to avoid missing certain details or the fullest possible experience.

“My hope is that people get lost in it,” Noel says.

Just as ROAM has evolved within its current audio-only state, its creators are branching out into the creation of physical settings to complement it.

In October, they hosted a listening party of about 20 people for Are You Afraid Of The ROAM? in their candle-lit basement. According to Matysiak, one guest was so spooked that she fled upstairs within the first 30 seconds.

“That’s what we were hoping for. With that one especially, it feels like you’re watching a [horror] movie you’ve never seen,” Matysiak says.

“You’ve made a decision to restrict your freedom and your liberty for a certain amount of time,” says Devin of listening to ROAM in an artist-controlled setting. “I think when an audience member does that, whether that’s going to the movies or a concert or whatever … its an investment of your brain time and concentration. I’m really interested in tapping into that and seeing what it does.”

In 2015, ROAM will crawl out of the laboratory and into the Atlanta community in the form of physical installations. The group is planning multiple projects for the audiozine, including an experimental audio tour of historic Oakland Cemetery, as well as an app for kids to create their own sound collages.

“It is a ‘podcast’ right now, but I feel like it can do a lot of things that can be applied to different activities and events,” Matysiak says. “We’re trying to let the project grow into new clothes, so to speak.”

In whatever form, the ROAM producers say they’ll continue to test the boundaries and versatility of the sound collage format. They hope listeners will grab a pair of headphones and strap in, as the collage of sound takes them to the place between “familiarity and alienation.”

“We haven’t done our job if you’re not able to develop some kind of relationship with the thing that we produced,” Devin says. “You can only do that if the artist leaves enough space to go inside and inhabit it for a little while.”