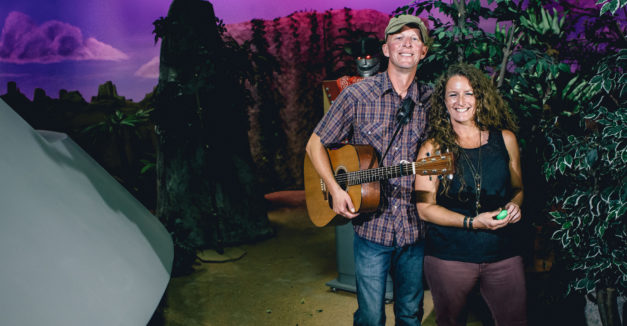 Among the greatest joys of the Good Living Tour is finding hidden gems in places one might never expect. In northeast Nebraska, that has meant stumbling upon a contingent of original songwriters and stumbling into small cultural strongholds like Cosmic Film Studios, near the western end of Lyons’ main drag.

Inside this modest yet devout temple to cinema history, singer/songwriters Ted & Alice Miller performed “River.” The rollicking acoustic song simply charts the progression of natural processes; with the changing seasons, birds migrate, the night sky evolves and the river rises and recedes. Implicit is the notion that all of this happens regardless of one’s successes or troubles. Life is ever-changing, even if we recognize its core elements.

Yet there is still whimsy and delight, found in the duo’s charging harmonies and in their surroundings — a backlit jungle, a flying saucer, a cowboy robot. Watch the Millers perform “River” inside Cosmic Films Studio one August afternoon during the Good Living Tour.