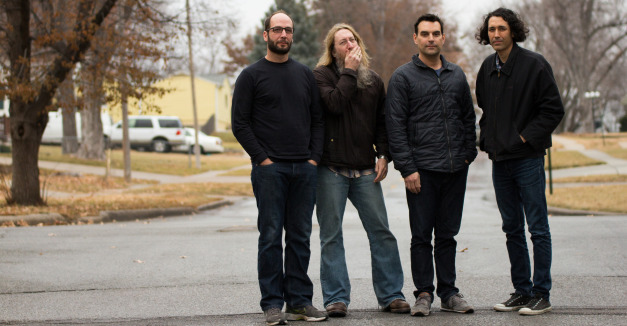 Two weeks before their first show together in 21 years, the members of Ritual Device sit around guitarist Mike Saklar’s instrument-filled living room, and it feels like the influential Omaha punk band never parted.

It’s the way they riff off each other, flinging good-natured insults back and forth. Drummer Eric Ebers describes the physical toll of drumming, while singer Tim Moss tells him that the opinions of drummers don’t matter. Saklar posits that Moss is too out of shape to play the drums himself, the vocalist’s old instrument.

“We got together and it was actually kinda like nothing was ever gone,” Moss says.

“It clicked in about 15 seconds,” Saklar adds.

They seem to bask in each other’s company, laughing and reminiscing about all that has changed, and all that hasn’t. They’re in their late-40s now, sure, with families and jobs, and the scene has changed around them. But the music has apparently stood the test of time.

And despite what you might think about unearthing those dark, turbulent punk songs after all that time, they are coming along just fine. They’re refreshing, even.

“People don’t listen to their own music,” Saklar says. “There were songs I hadn’t heard since 1995. Listening to it now it was really eye-opening.”

“There are some really interesting chord changes and some of the stuff that you guys did that … I never really noticed until [we were] breaking down the songs,” Ebers says.

Every year, they say, it seems like someone asked the former bandmates when they’d finally reunite. With busy lives of their own — in singer Tim Moss’s case, in San Francisco — it probably seemed like a pipe dream.

On Dec. 26, Ritual Device will come full circle when they play The Waiting Room with Cellophane Ceiling and Nightbird (RSVP here).

When they heard that longtime friends and also defunct Cellophane Ceiling were willing to reunite for a one-off show, they had to meet over dinner to discuss it. It was the first time that the four of them — Moss, Saklar, Ebers, and bassist Jerry Hug — had been in the same room together in 19 years.

“It was like we all got back in the van and stuff started flying,” Moss said. “We decided that night, let’s do it. Why not? We’ve got nothing to prove, we just wanna have fun.” 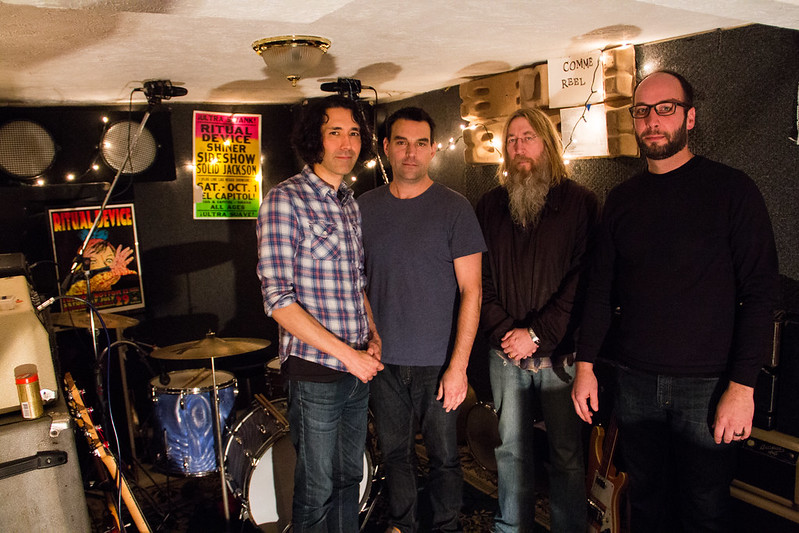 “Our history of playing with Cellophane was a big motivation to get it to work out,” Hug says.

The band played its first ever show at The Lift Ticket Lounge (now The Waiting Room) on Oct. 21, 1990, opening for Jesus Lizard and the Rollins Band.

They soon grew into an Omaha punk rock staple, part of a tangible scene that encompassed bands such as Mercy Rule, Frontier Trust, Mousetrap and Sideshow. They released multiple albums, including the acclaimed Henge. And in addition to relentlessly playing Omaha and Lincoln, Ritual Device extensively toured the Midwest. They supported national touring acts like the Offspring, Rancid and Fugazi.

Ritual Device became notorious for their live shows, most notably featuring Moss prowling the stage and tossing raw pig parts in the crowd. Tim McMahan’s Lazy-i blog recently posted the video below. In 1994, days after breaking his collarbone, Moss brandished a baseball bat during a show at the Capitol Bar and Grill and threatened any who dared to touch him. In 1993, they played the Des Moines leg of Lollapalooza, where they were deemed “ugliest band” by E! Entertainment.

Moss’s connection to Cellophane Ceiling frontman John Wolf goes back to the early ’90s, as together they ran booking outfit Main Vein Productions. They brought the likes of Soundgarden, Social Distortion, Black Flag and Nirvana to Omaha.

“[John and I] ended up spending a lot of time together and became pretty close,” Moss says. “I’m just excited to see them live.”

“It’s been fun to kind of look at each other and [realize] ‘Wow, we put a lot of effort into the band back then,’” Hug says.

As active veterans of the scene, they speak at length about how the landscape has changed, from booking shows and touring to performing.

“Venues [have changed],” Hug says. “Everything was DIY back then.”

“There wasn’t an infrastructure like there is now,” Moss adds. “[As a band or promoter] you rented a hall, you brought a PA in, you advertised. Now there’s venues that have built in stuff.”

“It took a lot of elbow grease to make anything happen,” Saklar says.

Not only are the venues well-stocked, they say, complete with air conditioning and amenities, but now there are a growing number. In the past, you either made your own venue or booked at one of the few permanent ones. Hug laughs when he considers the sheer number of bands playing on, say, the Saturday night of this interview. On Dec. 13, Slowdown had Josh Heinrichs; the Waiting Room hosted a four-band all ages show; John Klemmensen and the Party played Reverb Lounge.

“It’s almost like you have to decide where you’re going to go some nights,” Hug says. “There’s so many bands playing and you may like them all.” 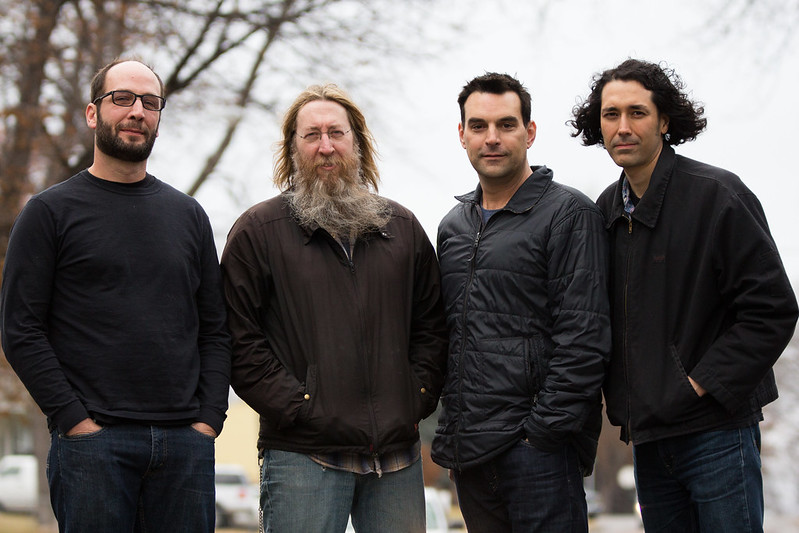 With the one-off nature of the reunion, Ritual Device is simply excited for the show. Saklar says that he has heard buzz from some younger fans, some that weren’t old enough to see them play in their heyday.

“To me, that makes playing worthwhile,” Saklar says. “Friends and new faces.”

“I’m looking forward to standing there onstage, turning around, and looking at those three fuckers,” Moss says of his compatriots. “If I can look up at these guys and see that they’re there, I’ll be happy.”