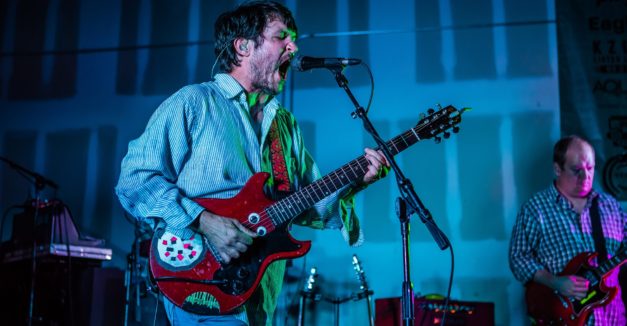 The playful way in which Cursive takes on the oldest institution — indeed, the way that 2006’s Happy Hollow tackles many of them — has always been somewhat of a delight, even as the album’s subject matter explores desperation, frustration and dark suppression. The reminder: A smirk from Tim Kasher as the band drew “Rise Up! Rise Up!” to a close at a concert at Zipline Brewing last September. It’s still fun to refute a centuries-old mindset even after it’s infuriated you.

The cavalier rejection of the fatalism’s pointlessness in “Rise Up! Rise Up!” wasn’t the only thing to smile about when the Omaha band performed it as part of a blistering one-hour set at Beer Nebraka. HN’s September benefit concert saw the return of original drummer Clint Schnase, admirably paving the way with an air of strong familiarity. It meant the reunion of Kasher and former Cursive bandmate Steve Pederson, who performed with his band Criteria earlier in the evening. Hell, Zipline had even brewed a (quite delicious) session IPA “Hoppy Hollow,” its name a wink at the sound-redefining album just one month after its 10-year anniversary.

Cursive pulled heavily from Happy Hollow throughout that concert, this song the most straightforward embodiment both of its cleverness, anger and futility as well as its sonic makeup. Matt Maginn’s first chugging bass notes called it to action and Patrick Newberry’s trumpet blasts answered triumphantly, Ted Stevens’ dissonant guitar leads echoing the lyrics’ departure from the church.

Watch Cursive perform “Rise Up! Rise Up!” below: