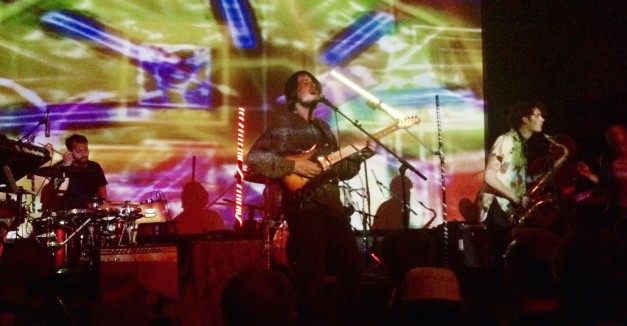 The current Omahan at the front of the Athens band shook and screeched his voice, offering an edgy balance to the funky horn section and pop keyboards. It’s a psychedelic display mirrored by punching instrumentals. Swirling and flashing images shown on stage, cutting through the members’ bodies before dancing on the large backdrop.

That aural and visual ecosystem is a hallmark of Reptar’s new sophomore album, Lurid Glow, which came out a few weeks back on Joyful Noise.

Icky Blossoms and Coaxed opened the Slowdown show, with the former coming off a week-long Midwest tour with Reptar. Reptar will continue touring through the next month traveling through the West Coast and onto the South.

Icky Blossoms opened its set with “In Folds,” a track from its forthcoming sophomore album, Mask, releasing next month. What’s apparent in the live renditions is that the new tracks test singer Sarah Bohling’s vocal range more than 2012’s self-titled debut. Her signature smoldering growl is less present, giving way for a more dramatic wail. But crowd favorites, like “Babes” and “Sex to the Devil,” still offer higher energy, at least for now.

As the band closed with the noisy dream pop “Perfect Vision,” Bohling invited her mother onstage to dance with her. They swayed hip to hip to the lullaby vocals, and her mother even broke away to play keys during the chorus.

Coaxed released its EP Coaxed II in November of last year via Bandcamp.