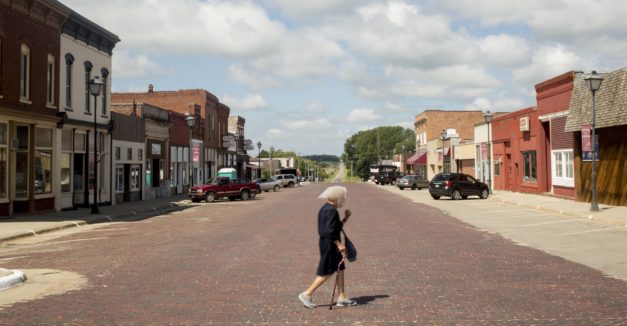 When Duke Erikson reminisces about learning to play music in his hometown, Lyons, population 850, he recalls feeling purposeful.

“It made me feel like I had something to offer,” Erikson says from his home in California.

For the last 20 years, Erikson has played bass in Garbage, an alternative rock band that’s been nominated for seven Grammy awards. This summer, the band is touring its sixth studio album, Strange Little Birds.

Erikson came of age in Lyons in the 1950s and ’60s, and as a young teen, he began teaching himself piano, guitar and drums. He started his first band and wrote his first songs in Lyons. He recognizes the significance of taking up the arts as a young person.

Looking back on the Lyons he knew, Erikson says he has been concerned about the town’s future.

“The corporate farming thing gave towns like Lyons a pretty hard knock back,” he says. “Back then, it felt like there were more possibilities.”

While it’s true that economic practices like corporate farming, which often buys out family-farmed land, have had a lasting and negative impact on many rural communities, it doesn’t have to mean the end of creative possibilities. It might just mean new kinds of possibilities.

In fact, the Center for Rural Affairs, which is based in Lyons, actively lobbies and educates against corporate farming as part of its mission to fight for economic and cultural opportunities in rural communities.

Nestled in the rolling hills of northeast Nebraska, Lyons is a quiet little town like so many in this part of the state.

It’s divided by a quick jog of a main street, home to a charming kitchenware shop, a hardware store and an updated library. Looking any direction from any intersection, you can find the horizon in the distance. There are a couple of modest, well-kept city parks at either end of town. At one, a public swimming pool teems with small children on a quiet Saturday afternoon in June, A gas station/convenience store serves as the hub of activity. And like other rural communities suffering from shrinking populations, empty commercial buildings and consolidated schools speak to a more vibrant past.

Here, the population peaked in 1980 at 1200. It’s fallen nearly 30 percent since then. Nearby Decatur has shrunk 33 percent in that same time period.

It might be easy for an outsider to cast a town like Lyons as a place of little cultural impact or significance, as though it’s a place where no meaningful creative or artistic ideas would find room to grow.

Jamie Horter disagrees. She moved to Lyons from Washington D.C. in 2011 after growing up in South Dakota. She wanted to live in a small town again. She’s a photographer and editor for the Lyons Mirror-Sun.

“It economically makes more sense to be here than in a metropolitan area,” Horter says. “Our real estate is ripe for artist acquisition. Lyons offers plenty of space — geographically, physically, and mentally — to start creating.”

The theater sits on Lyons main street, with the street itself acting as stage to a set of bleachers which, when not in use, fold back into a false storefront, nearly indistinguishable from those surrounding it. The theater has hosted film screenings, music and theatrical performances, and a video game night.

“Lyons has been a great place to enjoy rural life and it accommodates my desires to work nationally and stay connected globally,” says Horter.

She says small towns are unexpected and appreciable places to create art. It can be good for the artist to get away from urban centers where creating may often be burdened by expectations of “how art should be,” Horter says.

“So many people believe that in order to experience arts and culture you’re required to venture into the city,” says Tyler Vacha, director of development, engagement and operations at the Center for Rural Affairs. “In most rural communities there are interesting artistic and creative things happening, but no one knows about them.”

The Center for Rural Affairs helped secure funding for the storefront theater.

“Here in Lyons, we’re fortunate to have a community that seeks out new and interesting experiences to help maintain the town as a warm and vibrant place to live, work and raise a family,” Vacha says.

Look to the people here now building a framework for those possibilities. In addition to the storefront theater, locally made art sold at a shop downtown and Cosmic Films, Vacha mentions the prevalence of visual art featured in storefront windows by local business owners as an indicator of the concerted effort to breathe life into Lyons’ arts culture. Horter calls the visual art presence in the community remarkable.

Lyons is like so many other towns in this part of the state, from Decatur to West Point to Pilger. It’s hard not to imagine each one with the potential for these same cultural frameworks.