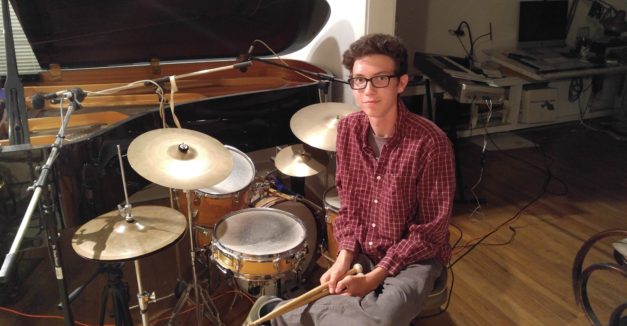 A grand piano sits in the living room of Adam Erickson’s childhood Dundee home, where he spends his summer between semesters at the University of Nebraska-Lincoln. The piano, his father’s, commands attention in the cozy living room; it sits right next to Erickson’s drum set. Bongos and assorted drums, sheet music and household trinkets surround the coffee table and sofas.

Erickson, 19, gazes across the room at his drum set, where he has spent many hours rehearsing, recording and practicing. Having started playing at age 6, it’s the source of a little nostalgia.

“I think it’s the earliest [thing] I really even remember about it, even back then we were gigging around Omaha,” Erickson says.

For Erickson, creative musical expression has always been a foundation of his upbringing and a fundamental part of his relatively short but prolific life. It started with a snare drum his dad bought him when he was five years old. At six, he was playing his first gig with the family band, the Burt Street Boys. In middle school, he was writing quirky, original rock songs in a band with his brother. By the end of high school, he was playing in several local ensembles, composing his own music and mixing albums.

Erickson says the Burt Street Boys played frequently around the city when he was in elementary and middle school. Since high school and now college, the now Burt Street Individuals after the addition of his saxophonist sister Helen, play only a few shows a year. The band was started by his dad Lars Erickson, a prolific jazz and classical composer and pianist known primarily for his innovative Pi Symphony.

But that is far from Erickson’s only creative release. When he was eight years old, he started the razors — a rock/folk band known now for irreverent garage pop and eclectic instrumentation — with his older brother Alek. The band was a product of a shared attic room and a growing interest in creating music for guitar and drums. It also provided a way for the brothers, separated by seven years in age, to improvise together.

“It was about learning creative flow for us,” Alek says. “We wrote a bunch of shitty songs, but our best songs would come when Adam and I would just start from scratch and figure out something that we both liked. Chords, tambourines, drum beats, stuff like that.”

Adam primarily remembers the often random nature of the first razors originals, written when he was only around seven years old.

“When we first started, our music was pretty weird,” Adam says. “I mean we were kids, so we were singing about being razors and monsters and stuff.”

RAZORS / BAD DREAMS SPLIT by RazorsThe razors gradually matured, as did Adam and his brother. The band added more members and focused on folk and pop-rock writing and recording. Adam says he went on a hiatus from the band during high school as he was busy being Omaha Central’s mainstay percussionist for the drumline, jazz band and jazz combo.

His recent return, a product of completing high school and going on to college, has been significant. In the last year, the razors have recorded and released a full album and a split EP and have been playing around Omaha at venues like Milk Run and Pageturners Lounge. Adam, known as “Hootie” to his band mates and friends, says that his brother Alek’s original compositions have driven the band’s content.

Interestingly, Adam’s primary contribution to the band hasn’t just been behind the drumkit. He has completely mixed, created transitions and created what he callls “interesting soundscapes” for the new works. He says that he has been spending a lot of his time in the studio working on the next album as well. And his co-founder contends his influence and expertise goes deeper than that.

“There was a growing up for us and our musical relationship in the razors,” Alek says. “Original arrangements, that’s the old thing. The new thing is that we are talking about album structures, song structures, formatting, talking about grounds for new projects. It’s very much turned into a different kind of partnership.”

In fact, this new role as a sound engineer is as novel as it is compelling for the young but seasoned musician. What started as a pet project, a way to blow off steam after a long day of challenging mechanical engineering courses at the University, has turned into a bonafide musical endeavor.

“I felt that I didn’t really have much of a way to express myself creatively,” Adam says, “So, I started messing around on a Digital Audio Workspace (DAW). I started with a free online program, worked my way up to Garageband and now I work on Logic Pro.”

At the height of last year, Adam was composing a song a week. By the end of the Spring semester, he had self-mixed and published an hour-long album of his solo work under his preeminent nickname Hootie. In June, he played a small show at Pageturners bar.

But for now, Adam says that his life-long projects that he has been so prolific in over his relatively short life, the razors and The Burt Street Individuals, take the priority for shows and for recording.

His solo work — what he describes as “interesting chord progressions” and a rejection of EDM — is as exciting as it is novel. To him it is an homage to and amalgamation of his musical experiences: jazz and bebop, folk and rock, razors, monsters, and drumlines.

Going back to Lincoln in the fall, Adam is looking forward to the opportunity to compose more and release “way more CDs and tapes.” He isn’t ruling out a show or two, either.

And like always, Adam will find and exploit the best way express himself in a way that speaks to him and his prolific and accomplished upbringing.

“Adam is definitely not like most people,” Alek says. “He has this clear but ever-changing philosophy in music. And his ability to construct and put together music is based on how he has been able to suck up a lot of information and then create a lot of interesting and cool ideas. And he’s always been able to do that.”