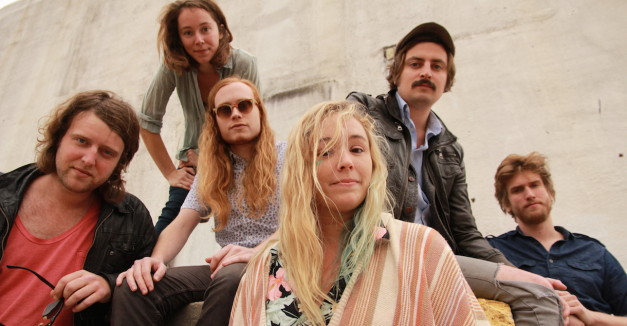 On top of everything, the sound guy never should have asked.

Only four of Wild Child’s seven instruments and one of its two indispensable voices were coming through the sound system at Shiner’s Saloon. One monitor was out entirely. It was a muggy 85 degrees indoors at the venue’s late afternoon SXSW 2014 showcase. The cold beer behind the bar was blocked by a horde of people. A few hundred spectators deep, the club was nearly at capacity for the hometown folk-pop band.

“How’s it sound up there?” the sound engineer sheepishly posed to Wild Child from the booth behind the crowd. Thirty minutes into the soundcheck, eyes wide, vocalist Kelsey Wilson answered.

“It sounds like butt,” she said in a voice higher than the steady tenor in which she sings: part-exasperated, part-laughing at her own roguish frankness and the terrible predictability of what was happening to the band all over again.

Four months later on the phone, Wilson needs to be reminded of the trainwreck show that landed Wild Child on the billing as the headliners for the Nebraska Folk & Roots Festival this Saturday at 8:30 p.m. in Lincoln’s Railyard.

Before the SXSW set was over and Wild Child played a rickety, ill-mixed set, there were ear-blasting PA system pops and another 20 minutes of checking sound.

“That was pretty awful,” Wilson remembers. “It was the third year in a row we’ve played that stupid showcase and it was just miserable. Third time, shame on us for agreeing to do this again. We were feeling pretty down.”

Somewhere in all of it, Lincoln’s Jeremy Buckley saw a band he wanted to headline the Folk & Roots festival he was co-organizing that summer. When he saw Wild Child had a day off on their upcoming May tour, he invited them to come to Vega and see a Josh Hoyer and the Shadowboxers set, to try sell the band on the town and Lincoln’s Railyard area.

“None of us really knew what was happening,” Wilson remembers, when Buckley approached the band after the SXSW show. “Just this one nice dude who saw us play a terrible show has offered to give us free dinner and hang out at a venue on a night off. I mean, if you just saw that and you’re still down, then, yeah!”

The evolutionary story of Wild Child is one of an obvious growth pattern. Kelsey Wilson and Alexander Beggins met while on tour as hired instrumental guns for The Migrant in 2010. They wrote songs on a ukulele in the back of the van, both dealing with the fallout of separate relationships. This is the roots of their first record, Pillow Talk, a series of intimate, cynical love songs, something like a scorned and languid-sounding Johnny Cash and June Carter. Their Ben Kweller-produced follow-up, The Runaround, sees the band seven members strong and building with horns, cello and keys on a record unabashed in its popness.

Wilson says that in 2010, when she and Beggins first began playing as a duo, they had to put back an entire bottle of whiskey just to work up the gumption to climb onstage. They’ve explained misconceptions that they’re romantically linked — because of their apparent closeness onstage — as them vibing off each other to stave off crippling performance anxiety.

But before they sounded more like Of Monsters and Men, Wilson and Beggins traipsed through days of being scared and drowned out in noisy rooms.

“Really pretty music doesn’t mean much in a loud bar,” Wilson says. “Most people don’t go to a bar to think about their exes and get really sad. Well … that’s a lie. That’s not true at all. That’s exactly why most people go to bars. But they don’t wanna listen to that, they want to pretend to have a good time.”

Even if the ukulele can’t be explicitly heard on much of The Runaround, Beggins’ acoustic instrument must still be at the center of everything. The ukulele is the first compositional square to which Wilson says they never want to stop coming back. It’s the the bare bones approach to knowing if a song is even worth doing and a warmth they can’t afford to lose as they’ve begun work on their third record, adding distortion and wah pedals in the studio.

Reverse all of this for the lyrics, where the warmth and sentiment that drip from any ukulele must be clawed and strained for. To hear Wilson tell it, the romantic-sounding ditties of the first record play a parlor trick on unanalytical listeners.

“Alexander and I are really sarcastic humans,” she says. “A lot of songs on the first album are about terrible things: cheating on people and drug addictions and drinking too much to really care about anything.”

Wilson singles out the band’s most popular song, “Pillow Talk,” the title track from their 2011 debut as a particularly deceptive, amorous number. It hinges on the chorus: “This pillow talk / Don’t wake me up / My dream is done / I’m still in love.”

“If you read the lyrics, it’s total nonsense,” she says. “We’ve realized after that first record it really doesn’t matter what you’re saying. All that matters is how you make people feel.”

This isn’t a story, for better or worse, about selling out, though a critic who believes ardently in such a thing would readily find all the pieces presented here: A band with marketability, personality and a melody-first sound, somehow standing out in one of America’s foremost music cities and offering that “it really doesn’t matter what you’re saying.” On the surface, they change their sound, they write poppier arrangements, they say it’s for the fans.

It’s a story about how being in a band changes being in a band. Why do arena acts born of modest barrooms play so bombastically by the midpoint of their careers? Perhaps, because they’ve spent 100 days each year trying to fill arenas. Playing for people, what young bands often want more than anything, is an impactful, unreturnable gift once it’s found.

“Crazy Bird” is one of the hookiest tracks off The Runaround, what Wilson calls her and Beggins’ first attempt at writing “a pop love song front to back.” The tune is head-over-heels without qualm or self-sabotage.

It’s an antidote, for instance, to “Anna Maria,” a song which originally pledged lasting devotion to the imagined recipient of the song: “Just know that I’ll always be right here.”

“And then that didn’t feel right to us and we didn’t like the song at all,” Wilson says. “And then we changed the ‘always’ to ‘maybe.’ There it is. That’s a Wild Child song.”

“[‘Crazy Bird’} was the first song we didn’t have to put any bitter twist to it. This actually makes you feel good. It gets in your head when people are singing words with you. That’s when you start to … ‘Damn, I don’t want people to say things like that.’”

With public performance, it becomes an issue of social grace or social responsibility, even if the personal nature of cute songs about manipulation still rings true. Their popular early song “Silly Things” ends with such a veiled admission: “[the coffee pot] hasn’t been used since I last used you.” Wilson describes the shock and perturbation at seeing “200 teenage girls” sing that line back to the band like a mantra.

“Pretty much everything we’ve done since the first album is shaped by everything happening to us,” Wilson says. “You see nothing but strange faces every day. You’re in this weird loop with strangers. So you become really affected by the show. It’s this one hour where you know what’s going on and have control of your environment.”

This week, Wild Child will drive half a day to Lincoln from Austin for one hour-long set. They say they’ll undertake the inherent personal problems of touring life to do it for the smiling people and would-be backup singers. Wilson relishes in the moments tucked in between the names she can’t remember, holding out for pieces of joy onstage, markers of success and surrealism. Are they going to fight those rare moments when they arrive by white-knuckling it out with sarcastic writing and bare songs?

Or are they going lean in, play “Crazy Bird” on Craig Ferguson with all the happiness it took to get them there? On their Late Late Show appearance, it appears Wilson nearly stops singing, she’s about to laugh so uncontrollably.

“[Alexander] is always to my right,” Wilson explains. “I know exactly what he looks like at every part of every song. Then, we look in front of us and the environment has changed so drastically. [On Ferguson], you’re both covered in way too much makeup and you smell like hairspray. They’ve been poking and prodding and making you presentable all damn day. But looking to your right and seeing the same shit you see every night … it’s joy, but it’s also like ‘what the fuck is going on?’

We’ve had a lot of shows where the songs just stop because I can’t do them. You have to cry-laugh for a little bit.”