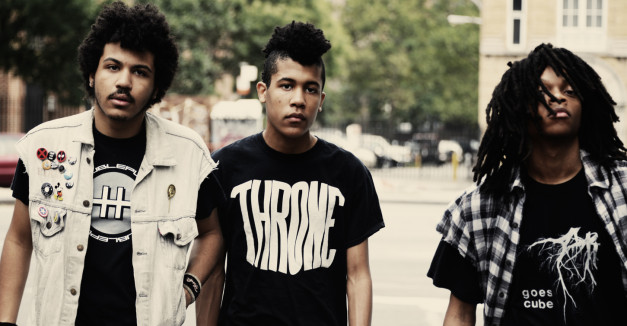 Something catchy, something loud and something hard.

When the brothers of the St. Joseph, Mo., band Radkey create their music, they look to these three criteria. Isaiah Radke, bassist for the trio, says the band calls its sound “grunk,” an amalgamation of garage, rock and punk.

Though the group played New York’s AfroPunk Festival in 2012 and has been referred to a punk outfit in various features and reviews, they don’t want to be pigeonholed solely as a punk group.

“We’ve never wanted to be called a punk band,” Isaiah says. “I mean, people call us that and that’s fine, but you can’t get mad once the music starts sounding a little different.”

The brothers Isaiah, Solomon and Dee Radke —all between the ages of 17 and 21— have recently garnered buzz for their energetic live performances and distinct, genre-bending sound. The trio was also recently awarded Best Live Act in Kansas City.

Isaiah says the two years since band’s conception have been intense. With a European tour complete, a nationwide tour and a new album ahead of them, the Radkes are working in overdrive.

“We feel like we’ve grown up more in the past two years than in our entire years of growing up,” Isaiah says of touring and seeing the world.

Since headlining on tours and appearing at SXSW, Isaiah says the band has seen a growth in fans and opportunities. The next show for the band will be at Omaha’s Maha Music Festival this Saturday. Tickets can be purchased here. RSVP for the event here.

Musical influences for the trio are vast, though Isaiah says classic groups such as Led Zeppelin, Nirvana and The Ramones are at the top of their list. Growing up, the trio’s father played a large role in exposing his sons to the various sounds and genres of rock with his large music collection.

“The more music you listen to, I think the better the music you make will be,” Isaiah says.

Though working to finish mastering their debut album, which will be released later this year, Isaiahs says Radkey’s focus is on its live performances where the intensity of the music is nearly tangible. Like the tracks heard on their 2013 Devil Fruit EP, the live Radkey performances are filled with heavy, thrashing guitars and theatrical vocals.

After touring and playing shows for two years, the more polished and evolving sound of Radkey will be unveiled on their new album and upcoming live performances.

“We’ve definitely discovered a new sound, our own sound, and we’re really excited about it,” Isaiah says. “All of our experiments have finally paid off and we’ve created some songs that sound like nothing else.”