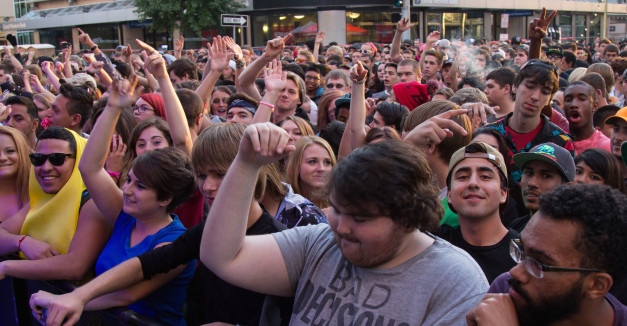 The pair are largely responsible for bringing the mix of national EDM and jam-band acts that fills a genre gap in the state. Skrillex outdoors in Lincoln in 2014. Primus outdoors in Benson in 2011. Widespread Panic, Government Mule, Bassnectar, Cherub and EOTO.

Kadlec and Radil sit around the living room of Kadlec’s midtown Omaha home, remembering how they ran errands with Dave Schools of Widespread Panic or chauffeured Phish’s Mike Gordon to a Doobie Brothers show in their 1981 Cadillac. A selection of framed show posters hang throughout, at once trophies of their accomplishments and souvenirs from beloved concert experiences. After hundreds of shows and almost a decade, excitement, anxiousness and amazement are still visible on their faces, still audible in the timbre of their voices.

This Saturday, Rad Kadillac will celebrate its ninth anniversary in much the same way it began. Portland’s reggae rock band Jerry Joseph and the Jackmormons — the band that performed at the first ever Rad Kadillac show — will play Bodega’s Alley (RSVP here). For Kadlec and Radil, it’s a nostalgic full-circle show, a “back to basics” event.

“[We decided], let’s do it at Bodega’s and make it kind of a fun, packed, weirdo night,” says Kadlec, president and booking agent at Rad Kadillac Productions. “We can’t believe it’s been nine years, though.”

Flash back to their college days, when both were pretty heavy into the jam band scene. Kadlec answered an ad in the Daily Nebraskan (pre-internet) taken out by a Kansas promotional company, looking for people who “like to go to concerts for free.”

“I called the number and ended up as a street-team person … and I caught the bug,” Kadlec says.

He began working security for Lincoln’s Rococo Theater in 2004, working his way up to booking agent and laying the foundation for what would become his network of connections. Two years into his position, Kadlec says a noise ordinance stifling volume at the venue forced him to make a decision that could allow him to book the shows he wanted without external restrictions.

“Nic and I got together and were like, ‘Are you tired of driving three hours-plus to see the music that we like?’” Kadlec says.

Radil was working a full-time job then, and he says that what he lacked in booking experience he made up for in logistical skills and capital. With no time to travel to Kansas City or Chicago or Denver to see a show, and given their shared musical tastes and complementary skills, he says Kadlec’s proposal was too good to pass up.

They launched Rad Kadillac from scratch, weathering many of the imaginable roadblocks and growing pains. Chief among those was an attendance problem. Radil notes that the company took a lot of financial hits at the beginning because people simply didn’t know who they were or didn’t yet trust them. They still jokingly refer to those shows as “private parties.”

“The first shows we were doing at Knickerbockers, we were thrilled if we got 50 people to show up,” says Radil, vice president and CFO of Rad Kadillac Productions. “It’s like people aren’t willing to try something new unless they know some other people are also doing it.”

Initially, there were only a handful of few venues that took a chance on Rad Kadillac. The first in Omaha was Club Roxbury, then located in an old strip-mall on 108th and Q.

“They did this weird thing where they would segregate with a velvet rope the 21 year olds from the under 21 year olds,” Radil says. “But we needed a place in Omaha and that was the only place in Omaha we had access to at the time.”

At that point, they were printing their own tickets on card stock, taking payments through PayPal and mailing them with “artsy crafty” ink stamps Radil found around the house. This allowed them to cut third-party costs for ticket purchasers and get tickets directly into their hands.

They credit social media, dating all the way back to MySpace, as one of the biggest factors that helped gain some early traction. Radil developed a script for the site the would paste show posters onto their friends’ pages en masse, hitting thousands at a time.

“This thing would just churn through and do it, rather than having to click one at a time,” Radil says. “We could do that in a very quick manner, rather than trying to find [people] wherever they’re at and hand them a paper flier like we had to do before social media.”

Also in lieu of flyers, they launched Rad Kadillac Radio Hour in early 2012. A CD forerunner to the podcast form, Kadlec assumed the radio personality of Kadillac Man to host each episode, previewing upcoming shows with artist songs and updates, as well as discussions on future events.

For all the production hours it took, Kadlec and Radil label the development a turning point in their ability to promote. They passed out thousands of CDs at venues and events like UNL’s Big Red Welcome and streamed each episode online to reach as wide of an audience as possible.

“It was a constant digital flier, in a sense,” Kadlec says. “I think it really helped people hear [the music] we were bringing.”

While at first the promise of electronic and jam bands appealed to smaller niche audience, Kadlec and Radil say it’s helped in the long run. Acts like Bassnectar, EOTO and Skrillex, which they booked very early on in their respective careers, keep coming back because of their long term commitment to the genres.

“Maybe they come once and maybe the attendance wasn’t the greatest the first time, but by making that personal connection, they still want to come back and give it a shot,” Radil says.

“Professionalism is the key,” he adds. “If you do something that ruins your reputation with one of the main agents — and there aren’t a ton of them — you’re done.”

Kadlec describes the pair as a yin and yang, a perfect balance between dreaming big and making practical decisions. To many, Kadlec is the face of the company, outgoing and excitable. Internally, Radil is the essential anchor.

“You have to make sure you’re realistic in your expectations,” Radil says. “We’d love to have 10,000 people at every show, but we’re not booking Taylor Swift, so we can’t guarantee that’s going to happen every time.”

Where Kadlec’s ambition is seemingly boundless, Radil holds the reigns of pragmatism. He has been most instrumental at the bargaining table. Each potential show is thoroughly researched, all of the numbers calculated to determine how big a show can be, or if it’s even worth it.

“We wouldn’t be where we are today without Nic behind the scenes and calming me down,” Kadlec says.

Their overall measured approach and ability to maintain connections has allowed them to think big in certain situations. They cite the Skrillex in the Streets event, which they hosted in October with the help of The Bourbon. The now-famous EDM artist’s agent approached Rad Kadillac about doing an “underground” show, or anything other than a venue. They relished the challenge.

“We had done Primus in the streets,” Radil says. “[We thought], wouldn’t it be awesome to do something in the streets of downtown Lincoln, three blocks from where the students are?”

Both sang the praises of the city of Lincoln and of Jeremiah Moore, owner of The Bourbon, for supporting an unconventional idea.

“It was really awesome that [the city of Lincoln] actually played ball and were really supportive of trying something new,” Radil says. 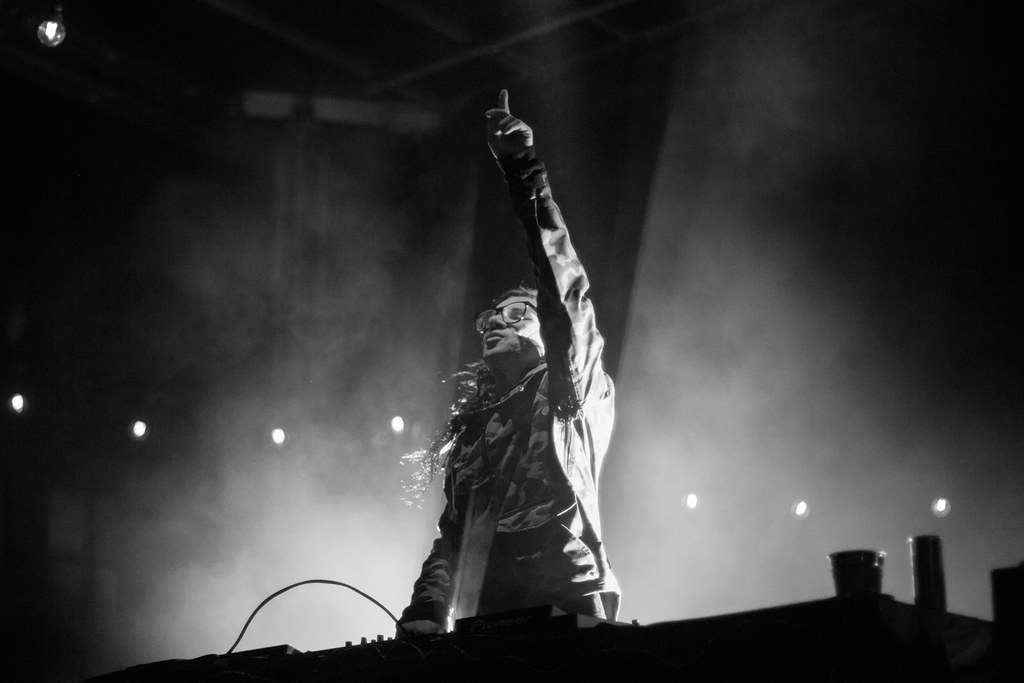 They see all of this as indicative of a larger trend in the scene, in which venues and promoters work closely, and improvements in amenities make it easier to book bigger and bigger acts. The Waiting Room revamped itself in 2010 to allow a bigger capacity. Slowdown has showers and washing machines. All of these factors add up to more attractive opportunities for touring acts.

“The quality of venues has made our job easier,” Kadlec says. “You go into a place like the Slowdown or Waiting Room and for clubs of that size … [artists] can’t believe what they’re walking into.”

The aim of Rad Kadillac has never been to compete with these venues. They say it’s nearly impossible to make money from this business without having a physical location, or partnering with one.

Instead, Rad Kadillac exists as a way to share the acts they enjoy with as wide of an audience as possible. To not only provide a memorable experience for themselves, but for artists and patrons.

“Ultimately, [it’s] that rush that you get when the lights finally turn down and you see everyone out there having a good time,” Kadlec says. “To be able to share that with thousands of people in a night … that’s a cool little gig to have, in my book.”