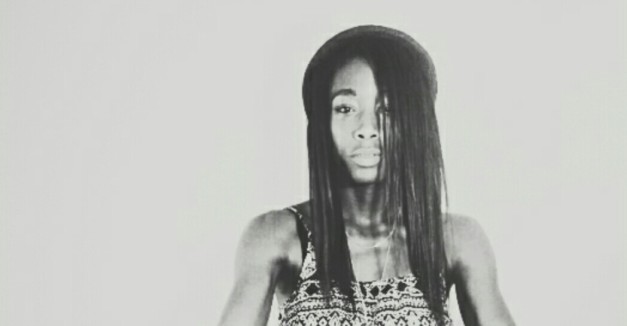 If it is any indication of the type of artist she is, when I met CJ Mills one Saturday morning in early June at Aroma’s in Benson, she had just finished running a half marathon (all before 10 a.m., mind you) and was glowing in the sunlight like the goddess she is.

I, on the other hand, had hit the snooze button five or six times, and had just barely crawled out of bed and made it to meet her on time. I already had four of the five tracks of her Quiet EP and was doing everything in my power not to just outright fan girl all over the place. I think I failed at this to a certain extent. I think I’ve always failed at this to a certain extent.

A year and a half ago, on a quiet December night in 2013, I found myself singing at a show Dominique Morgan had put together called Dom’s Favorite Things at the Pizza Shoppe Collective. I was playing to an entirely new crowd and with a whole new group of musicians. I didn’t know it at the time, but this was Mills’ first show.

She got up on stage and nervously belted out a few India.Arie and Lauryn Hill covers, and after I shook all the angels singing the Hallelujah Chorus in my head, all I could think was, “I’m going to do so many shows with this girl.”

Mills hit the ground running. Shortly after this show she began spending all her time outside of running and working (she’s a health inspector), playing shows and writing songs on her left-handed guitar. She admits these days to spending up to four hours a day on the guitar, also learning bass and keys and setting up her own home studio so she can have complete control of her sound. In the meantime, Lincoln’s Lucas Kellison took it upon himself to produce this EP for her, and while I couldn’t be more jealous that he got the job, Quiet is better for it.

In just a year and a half, CJ Mills is writing the kinds of songs that will silence a room. Her songs are familiar to me as the R&B equivalent of Omaha’s John Klemmensen in the way they detail real life, are in-the-moment present, and are easily relatable to anyone standing before her. Her voice is a showstopper, invoking hoots and hollers from her audience — her runs are clear cut and controlled, and while there are an abundance throughout each song, they act more as melody than as filler. The covers that have stuck with Mills are an accurate indicator of her sound. American Idol showed us there are many vocalists in the world who can do fills, many vocalists who cover Lauryn Hill songs, and many vocalists vying for our attention, but very few who should. CJ Mills defies all those odds. Omaha and Lincoln, as far as I have experienced it, has had a real drought in the way of mainstream R&B singer-songwriters. No more. Any audience I have been a part of, experiencing Mills for the first time, walks away wondering where to get a hold of more of her music and are just dumbfounded that they’ve never heard [of] her before.

And Quiet hits the ground running, too, with “Come Around for Me.” It’s an infectious poppy, rock number about letting someone who still stands a chance know what it’ll take to make that happen. It’s got that Chuck Berry/Bill Haley fire while still being all Mills. “Retail Star,” follows it, a tale of the woes of materialism that marks Mills’s first attempt at hip-hop. She recalls Lauryn Hill and Erykah Badu in her lines and rhymes and flirts with background vocals on this track, thanks to a little help from Peedi Rothsteen (Rothsteen, Voodoo Method). “I Can’t Be” is a reggae tune with a hooky chorus that, if you’re not careful, you’ll find yourself mindlessly singing everywhere. “Loosen” is the only ballad on the EP, and the one that makes Mills the most trepidatious. She’s nervous about her voice holding out, about her voice being so vulnerable in following the flow of the song instead of dictating everything the way she does live, but she does so flawlessly. The song is an intimate telling of the end of a relationship and moving on.

The last track is a bit of a surprise for anyone who goes out and catches Mills on the regular. She admitted to me she’d written “Need I Say More,” taken it to Kellison, recorded it, and never played it out. It’s understandable. It’s a fully fleshed out, funky head-bobber that is likely possible to play live solo, but is such a riot as it is, that why not wait until she’s put together a band?

I would be lying if I said I hadn’t had this in regular (bordering obsessive) rotation since she handed it over to me. It’s such a breath of fresh air from the regular pomp and circumstance of the continued battle to define the “Omaha sound,” and I hope a glimpse of what is in store for the future for us.

You can catch CJ Mills this Friday with Lucas Kellison for free at Harney Street Tavern in Omaha or July 10 as part of ZooFest playing with Josh Hoyer and the Shadowboxers.