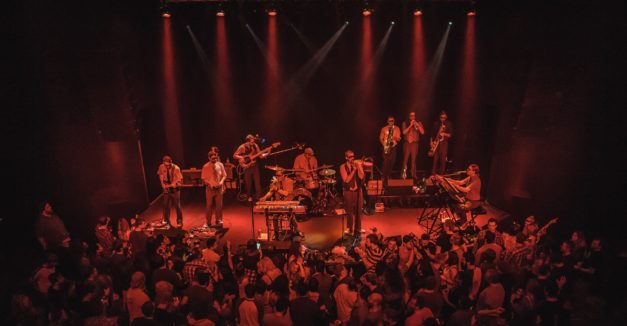 The Chris Klemmensen yell has a twofold effect, both an outlet for his nine-piece funk outfit’s overflowing energy and a howling announcement of what comes next. When the Satchel Grande frontman cut one loose during the band’s 10th anniversary show at Slowdown, signaling the transition between “The World…” and “Put Up A Fuss,” everything fell in-line behind him: a warm brass section, crisp guitar and a head-bobbing, dance-inducing rhythm section.

It was a signature Satchel Grande moment — that seamless movement from one positively joyous track to the next – in a decade full of them. A longtime fan may have noticed that, overall, little has changed about the band’s aesthetic from the start; the blue blockers, business dress, driving funk and guaranteed good time await at any of the Omaha band’s frequent concerts.

Yet that scream, that sound, that song all point to a subtle evolution. Satchel Grande has picked up the pace throughout the years and from album to album, gently pushing the throttle from the smooth slickness of Dial ‘M’ for Mustache to the more celebratory, roaring, Parliament-like sound of its most recent album The Hook and the Heartache. If possible, it’s pushed the band’s live show into more energetic territory.

That October night, Satchel Grande was in rare form. See for yourself below with its performance of “Put Up A Fuss.” (And catch them Friday, Dec 23 back at Slowdown; RSVP here).