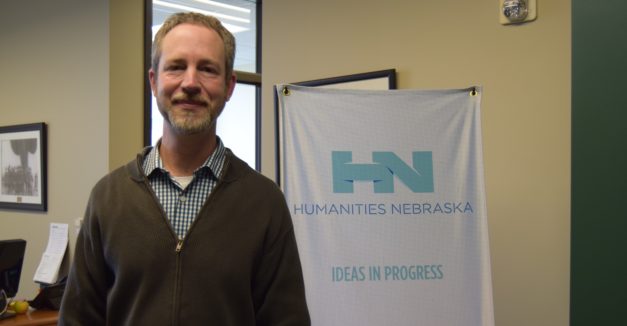 Among the many awards lining the bookshelf in the Humanities Nebraska (HN) conference room sits a clear glass plaque engraved with the declaration “Friend of Tourism.” The award, presented by former Nebraska Gov. Dave Heineman, illustrates the cultural organization’s statewide economic impact.

Despite the endorsement, the organization risks a 40 percent operating budget cut if Congress passes the Fiscal Year 2018 budget as proposed by President Trump. That means arts and humanities programs throughout Nebraska will have to downsize significantly, and HN’s Executive Director Chris Sommerich says some will even have to close their doors.

“What worries me is this infrastructure for the arts, humanities, education and culture disintegrating — across the country, and in Nebraska,” says Sommerich, from his office on the third floor of the Lincoln Community Foundation building in downtown Lincoln. “There’s nobody doing what we do.”

President Trump’s recently proposed budget would entirely eliminate two federal agencies that provide financial support for nationwide cultural organizations: the National Endowment for the Humanities (NEH) and the National Endowment for the Arts (NEA). The NEH and NEA each receive $148 million per year in federal funding. Over 80 percent of the NEA’s budget is given in grants and awards, all of which will disappear for organizations like HN and the Nebraska Arts Council (NAC) if Congress passes the budget proposal.

HN offers direct grants to other organizations, as well as programming for Nebraska communities that lack the resources to program events themselves. These include reading sessions in city libraries for underserved families, an annual forum for students to discuss current events, an educational event about the impact of World War One called Chautauqua, along with many other events.

While the Trump administration argues cuts are necessary to decrease the $19.5 trillion national debt, the NEH and NEA make up only a combined 0.003 percent of the overall budget, which adds up to cost about 46 cents per year from individual taxpayers.

One of many organizations comprising Nebraska’s cultural infrastructure, Lincoln’s Symphony Orchestra (LSO) receives a portion of its budget from the NEA. LSO Executive Director Barbara Zach said the cuts would limit the organization’s ability to provide music programming for its community and would force tough decisions about its remaining funds. She equates the potential decrease to an employee salary or payroll for a family concert.

“It would be a direct hit to our budget,” Zach says. “I know the NAC would put contingencies in place, but there’s no way around it: Less money is less money.”

Zach and Sommerich urge Nebraska citizens to phone their elected officials and oppose the NEH and NEA cuts. NAC Director Suzanne Wise encourages patrons to share personal stories with officials about how the arts and humanities have benefitted them.

“Everybody tells their particular story, but you have to tie it back to the arts council,” Wise says.

Hear Nebraska contacted four members of Nebraska’s congressional delegation for comment. Congressman Don Bacon, Nebraska’s Second District representative, expressed his “great appreciation for the arts” and said he would “work to ensure a balanced approach” to arts funding. However, Bacon stopped short of opposition to the cuts, stating organizations across the board must “share the burden” of budget cuts.

Rep. Jeff Fortenberry sits on the House Appropriations Committee, making him a key member of Nebraska’s delegation on the issue. While he did not respond with comment, he supported a funding bill the committee passed for FY 2017 that would allocate $149 million to the NEA. Sen. Deb Fischer also has yet to return a request for comment.

As the conversation surrounding the federal budget heats up, the Trump administration faces a long road before it can pass a finalized budget. Sommerich says Nebraskans will play a critical arts advocacy role and, ultimately, can ensure the cultural vitality of communities throughout Nebraska. An informed citizenship, Sommerich explains, is crucial in continuing to support the arts and humanities.

“Understand how [this funding] connects to what’s happening in your community,” Sommerich says.