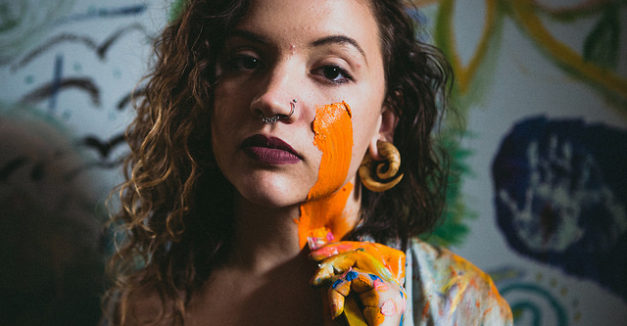 Lincoln live performance artist Amber Stevens does not limit her artmaking to a traditional canvas. From large venue stages to the walls of DIY house shows, album covers and drum kits, Stevens’ paintings are splattered across Lincoln’s music scene, recognizable for their somewhat abstract, but purely emotional appeal.

In this HN video feature, Stevens’ fleeting live performance during an I Forgot to Love My Father set becomes slightly more permanent. Watch, and read on to hear how this work has inspired her to create tangible, nontraditional canvas art with no plans, drafts or sketches. Stevens will debut the art pieces inspired by this performance Friday, June 3, in Parrish Studios, 141 O St. RSVP here.

Stevens says she sees the connection between live music and performance art as a give and take, a ricochet of sorts. The climactic build-up in a song may influence some kind of deliberate movement in her paintbrush. In the same way a musician is unable to go back and fix a wrong note once played, Stevens’ live performances cannot be edited or erased. Rather, these performances are temporal acts of freedom and expression, lasting only as long as the band’s set.

Not knowing how a live performance will go has taught Stevens how to break free of the desire to control its end result. She once ripped up a parchment paper art piece she’d spent the entirety of a Better Friend set creating, only to throw its pieces out to the audience afterward. The idea behind that was to appreciate something that was happening in that exact moment, with the hopes the performance would live on through the audience members who’d experienced it. Since then, Stevens has explored artmaking in different mediums, beyond paper and canvas. For Stevens, a walking, living, breathing piece of art in and of herself, her art has recently taken a different form.

“I like to think of the body as a vessel — a vessel for ideas and creativity,” Stevens says.

In January, Stevens’ art making took a human form on the Bourbon stage during an I Forgot To Love My Father set, where she performed as an artistic expressionist with first-time performer Maggie Wallace serving as her human canvas. 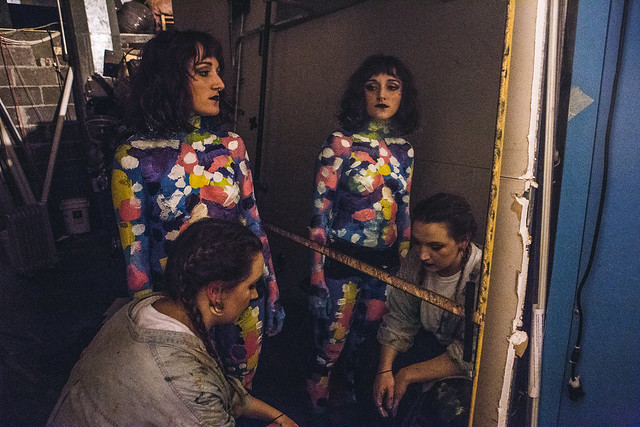 Potentiality and growth are at the heart of Stevens’ art. She longs to find a deeper meaning in mundanity, things that most people would just see as ordinary. This is what makes the body, and its growing, nurturing normalities, a particularly interesting concept for her.

“I was trying to convey that you are — as a body — art,” Stevens says of the performance. 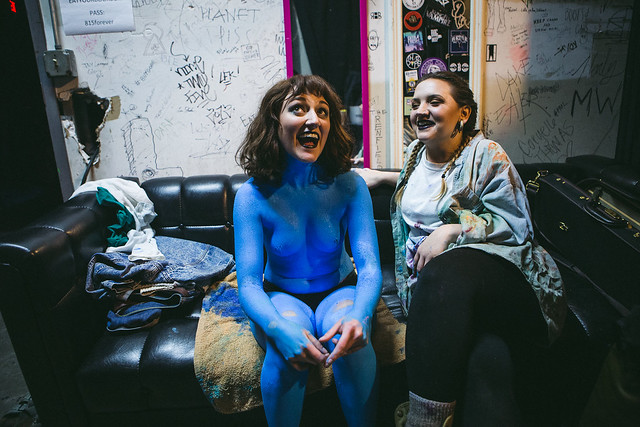 Adding two more bodies on stage with the dynamic indie folk-punk seven-piece IFTLMF wasn’t just an idea dreamt up overnight. And one of those bodies standing nearly naked in front of a packed Bourbon crowd is exactly what it sounds like — terrifying, and vulnerable.

Knowing this, Stevens and Wallace practiced the performance several times before the show, wanting the performance to be something intimate between the two of them, but also be emotionally compelling to the audience.

“The most effective art is art that is felt — and felt in a very emotional way,” Stevens says.

Stevens didn’t quite notice the emotional impact of her performance until afterward when people came up to her and Wallace talking about ideas of empowerment and self-acceptance. Rather than viewing Wallace’s body painting an act of empowerment, Stevens says the performance was more about making Wallace feel comfortable enough to empower herself.

“Throughout the whole experience I was growing and becoming sort of stronger, but I was OK with it,” Wallace says. “I wasn’t becoming hard, just stronger.”

Themes of empowerment, sexuality, self-acceptance, impermanence and interconnectedness constantly present themselves in Stevens’ art and life. As someone who is heavily influenced by her environment, Stevens says music has naturally been another major component in her creative endeavors. Befriending musicians has made Stevens’ work known across the music community for her collaborations in live performance and album cover art. Local musicians have even commissioned Stevens to paint their instruments — if you see a colorful, abstract painting on a Lincoln stage, it’s not far off to assume it’s made by Stevens.

Presumably Stevens’ most notable collaboration is The Ambulanters Leave The House EP art, one of a series of paintings that reflects the group’s emotional lyricism. While sitting in on band practice and listening to the EP several times over, Stevens created an art piece that encompassed what she says it means to feel omniscient and uncertain, much like leaving home.

Stevens says this particular piece resonated with her because it was made at a time where she was also experiencing uncertainty and becoming comfortable with not knowing what was next, which connected her to the group even deeper than their preexisting friendships.

At the root of all Stevens’ art work is a simple idea: human connection. Stevens hopes her art will make people feel like they’re not alone, like they’re apart of something bigger than themselves.

While the way in which her art is received may not always be clear, one thing is certain.