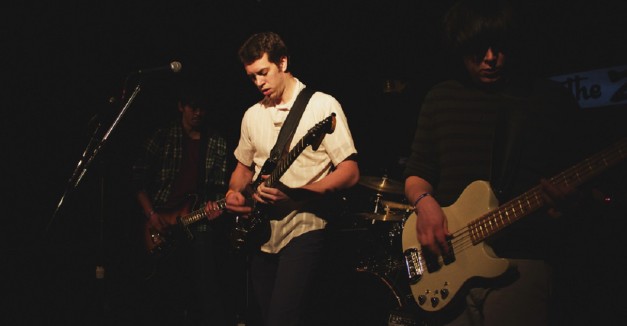 Kelly Houchen and Dave Arredondo drive the vocals, collaborating rather than competing, with the explosion of sound surging from their guitars along with the bass and drums played by Jason Morris and Jordan Elfers. Most of Powers’ material keeps the notes quick and volume spiking, as in their song “Flathead.” But departures, like “Razor Word,” maintain that upbeat tempo but extend the vocals, emphasizing the lyrics.

At full height, Powers can shake a room and has done so across Lincoln venues, like Knickerbockers and Zoo Bar. On Friday, they will experiment with this booming sound by bringing their music outdoors.

Hear Nebraska: What was your first public show in Lincoln, and how did it go?

Jordan Elfers: My first public show in Lincoln was with a ska band called Totally Awesome Fun Band in 2005 or 2006 at Knickerbockers. I played trombone, it didn’t go very well (for me). My first public show with Powers was a couple years ago at Knickerbockers, and as far as we all thought, it went great. I feel like we were more impressed than everyone who showed up.

Dave Arredondo: Our first show was at Knickerbockers with Demos and The Vingins. I don’t think Demos play very often, but they are a great band. [The] Vingins were doing a reunion. Overall, there was a great vibe and a good crowd.

DA: Our songwriting has come a long way. We communicate better musically than we did in the beginning. We are in Fuse Studios right now working on a second recording, and are excited to hear the progress from the first EP to the LP we will release.

JE: I grew up singing along to my parents’ records and shredding on a fake guitar with my teeth. I still can’t play guitar.

DA: I grew up classically trained on violin. I remember learning all the positions on a cardboard box “violin” with a stick as a bow. They wouldn’t give you the real thing until you learned how to handle it.

HN: Do you think there is a disconnect between Lincoln’s creative community and business community?

JE: There is a disconnect, but as far as I can tell it’s due to the difference between nightlife and day jobs.

DA: I don’t really know. It seems like the press community is more interested in the art and music scenes. The bars and venues, naturally, are pretty involved.

JE: It’s really hard to experience both. I don’t necessarily think the business community doesn’t care, I just don’t think they have as much free time. Off work at five, asleep at 10 or 11, back to work at eight. I get off work at two or three in the morning and follow the same routine. The sun vs. the moon. As a whole, our city starts our nightlife later than most other cities with booming music communities that I’ve been to. Most of the Midwest does the same.

DA: I’m not really sure I understand the question. But if Doozy’s wants to sponsor us with free sandwiches, or if Wells Fargo wants to help me pay off my credit card, that could be a good solution to whatever problem there may or may not be.

DA: I am a big fan of the Less Talk, More Rock school of thought for live performances. I spend a lot of time with music — thinking about it, listening to it, playing it. I also work at Knickerbockers, so I see and hear a lot of bands. I dig it when a band or performer can get on stage, own that space, give it their all, and not distract the crowd from the performance.

JE: It’s impossible for me to choose one, so here are three, two from now-defunct bands: Ideal Cleaners – “The Cowardly Buzzard”, Life of a Scarecrow – “Space For Rent” and The Renfields – “Inside Out.”

DA: One song I really like is “To the Person in Charge” by Dirty Talker. There is this cool overtone on the verses that sounds like a car dinging to tell you the door is ajar. That song gets stuck in my head on the reg. I also like listening to Bright Calm Blue’s album A Direct Approach for Casual Conversation, especially the track “Swallow Feathers Whole.”

Hanna Guenther is a Hear Nebraska editorial intern. Reach her at hannag@hearnebraska.org.