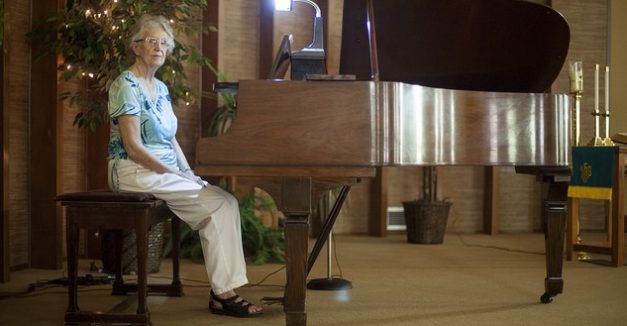 It’s a sweltering summer afternoon in the Sandhills, and even though Phyllis Clement doesn’t give music lessons on Fridays, she still sits on the bench of a vintage Knabe & Co. baby grand piano.

Her eyes are either intently on the sheet music or tightly shut. The 87-year-old seems to be quite comfortable here, in one of the largest churches in Ord, Neb., where the classically trained pianist and vocalist plays the piano on Sunday mornings. Normally when Clement performs at Ord United Method church, it’s to more than 100 people, but on this summer day, she has a much smaller audience.

Born and raised in nearby North Loup, Clement has been teaching music in the area for more than 40 years. Currently, her roster comes to 25 students in and around Ord, and she has invited three of them to the church where she is performing a song for a Hear Nebraska live video. As cameras roll, Clement’s students sneak through the church’s swinging back doors. Quietly finding their way through the sandalwood pews, they take seats and listen.

Watch Clement perform a rendition of the classic gospel hymn, “Jesus Loves Me”, below:

“Before she died,” Clement says, “my mother requested that I play this song at her funeral.”

Initially, I think this memory might elicit some emotion from Clement, but she speaks of her mother’s wish with a resolute voice. Clement recounts how she’s played this song at several other funerals, too, many of which belonged to her own family members.

“I just sit up on the piano and don’t look around at anyone or anything,” Clement says. “I don’t worry. I just try to make it good.”

Through playing myriad local funerals and weddings, Clement has learned to perpetually wield the power of her emotions, maneuvering through them with ease.

“When I’m playing a piece, I don’t really think about where I’m going to do this or that,” Clement says. “It is only in the moment that I know my feeling should go into it.”

Growing up in North Loup, 13 miles southeast of Ord, music wasn’t just a hobby for Clement, but a way of life. Including her mother, who also played the piano, the vast majority of Clement’s family members were, or are, musicians. Her grandmother had a vocal quartet. Her father was a singer. Her brother is a working Nashville musician.

“I’ve just never had a time when music wasn’t a part of my life,” Clement says. “I used to walk three blocks down the street to my piano lessons — this was in the ’30s when nobody had any money. My mom paid 25 cents for a lesson.”

Eighty years later, and Clement only charges her students $9.75 more than what her mother had paid for a 30-minute music lesson during The Great Depression. (She’s recently considered charging $15 for a 45-minute lesson, explaining how “30 minutes just isn’t long enough.”)

Clement doesn’t seem to be as interested in measuring the monetary value of a music education so much as its ability to build confidence and discipline from a young age. This attitude toward music is seated in her life experiences, rooted in a family lineage of musicians, and at 40 years old, Clement graduated from Kearney State College where she majored in vocal performance with a minor in piano.

“I got married and had a family, and it didn’t always seem possible to go to college,” Clement says. “But when we moved to Kearney, it seemed like a good idea.”

After college, Clement moved back to the Ord area, where she had a 30-year career selling life insurance, and later began giving private music lessons out of her home, hoping to relay her own music education into the lives of her students.

“I think knowing how my education and my abilities have impacted me makes me want my students to be successful in their piano playing and their singing,” Clement says.

Clement has also taught music in several school districts across Nebraska in addition to directing the choir at Seventh Day Baptist church in North Loup since 1988, and playing piano each week at United Methodist, where the residual effects of Clement’s performances eventually become clear on this Friday afternoon in Ord.

As Clement steps off stage after “Jesus Loves Me,” one of her students weaves through the pews, approaches Clement and says, “I want to learn that song; can you teach me?”

“She’s just really helped me grow as a musician,” says 15-year-old Richele Masin, who’s been sitting with her 12-year-old sister Hannah. “Whenever I play a piece I can kind of think of what she would tell me to do and then I can make it better.”

The Ord born-and-raised sisters aspire to play multiple instruments in school band, and to continue playing music into college. They agree that Clement is always pushing them toward those goals.

“Phyllis is really encouraging,” Hannah says. “Even when I see a piece that’s not really on my level, or is little bit harder, she really works at me and gets me to be better.”

A supportive fixture at high school band concerts and elementary music programs alike, Clement says she isn’t afraid to challenge her students. She is, in her own words, “pretty darn particular about what they’re accomplishing.” To some extent, Clement’s lesson plans tend to mirror her own music upbringing, which was strict and technical.

“I try to teach students to be proficient and successful at the same time,” Clement says, “while also feeling good about themselves and enjoying what they’re doing.”

Clement has especially committed herself to another one of her students, a physical therapist in Ord who has been a singer all of her life. Christy Peterson, 51, started taking vocal lessons from Clement about a year ago when she began losing her voice.

“For the longest time I wasn’t using good voice mechanics,” Peterson says. “I’ve always had a very soft voice, so every time I’d sing I would had to get really close to the microphone.”

In an effort to help Peterson gain her voice back, Clement has spent the past year investigating various information about vocal performance and techniques.

“Phyllis is always coming to each session saying, ‘I’ve done all this research,’” Peterson says. “She has so much energy and so much desire to do a great job, and as you can tell, she’s excellent with what she does.”

It’s not out of the ordinary for Clement to go above and beyond for her students. From attending their school music events to digging up information on the internet, Clement’s small, voluntary actions tend to make big impacts on the lives of her students. She’s come a long way with Peterson in particular.

“For the first time in my life I’m learning how to project my voice, open my throat and relax the muscles,” Peterson says.

Her voice has returned due to Clement’s techniques, and the two still meet from time to time just to check in, or hang out.

“She is so passionate about everything that she does, and I think she’s a wonderful staple in this community,” Peterson says. “She’s just one of those types of people who holds things together.”

Faced with her students’ praise in the interview, Clement shrugs and shakes her head. When that’s not enough, she accepts the compliments with a trembling chuckle.

“I guess I feel a little bit humbled by it all,” she says. “All I’m really doing is being myself.”