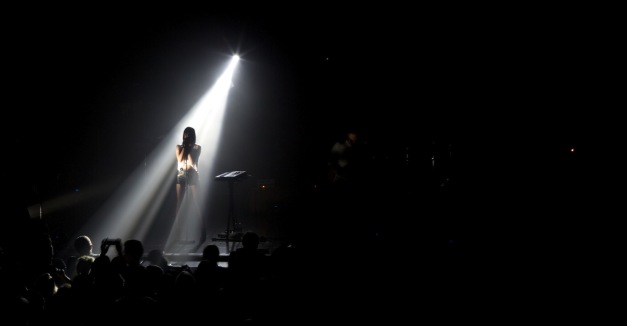 Beanies, baseball caps, flannel and sports jerseys: a wide array of concertgoers packed Sokol Auditorium last night. Some couples, hand in hand, pushed to the front as if bound together, while others stood alone just wanting to be lost in the lights and sound of Phantogram.

The New York duo has put its stamp on indie pop since 2009, playing festivals Coachella, Bonnaroo, and recently, Lollapalooza. In a big room or field, Sarah Barthel and Josh Carter know what it takes to put on a captivating live show, a concept they appear to have kept in mind when making their newest album Voices. Their mix of pounding guitar solos and airy vocals creates a dreamy psych pop genre. 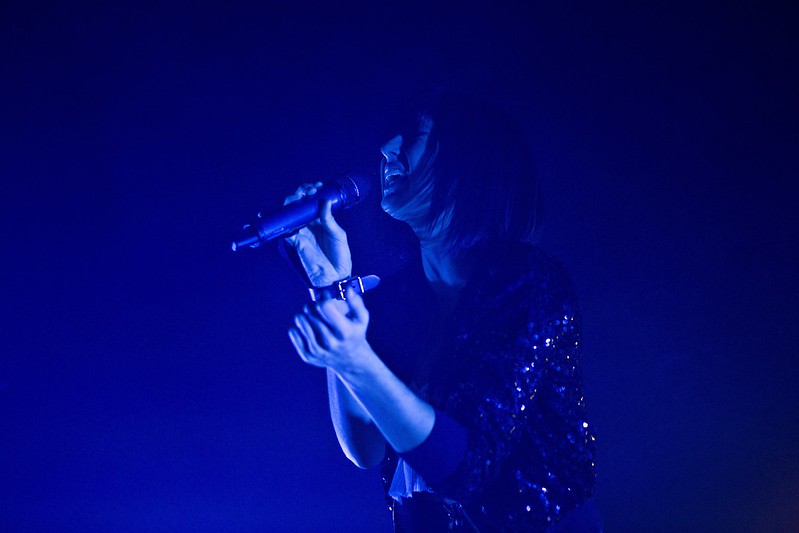 Lia Ices opened last night’s show with soft, ethereal vocals reflected in her pastel pink hair. She wore her name on her dress — that looked more like a basketball jersey — with the word “ICES” printed in all caps above the number three.

At the beginning of her set, the vocals were more high-pitched and echoed softly off the

dimly lit walls. The lyrics blended together, making it hard to interpret what she was saying. It was a language all her own. As she broke into “Higher,” the single from her newest album Ices, the tempo quickened and the blue lights above the stage whirled in a circular motion, blinding and hypnotizing the crowd — a taste of what Phantogram was about to unleash. 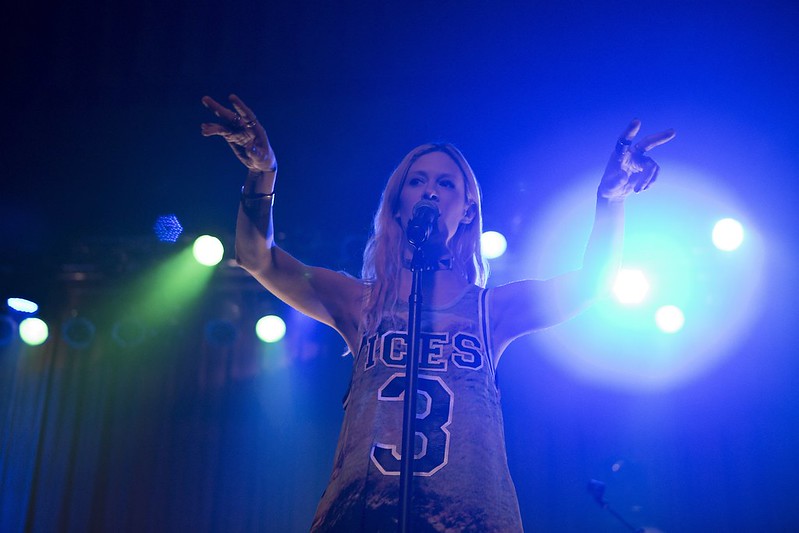 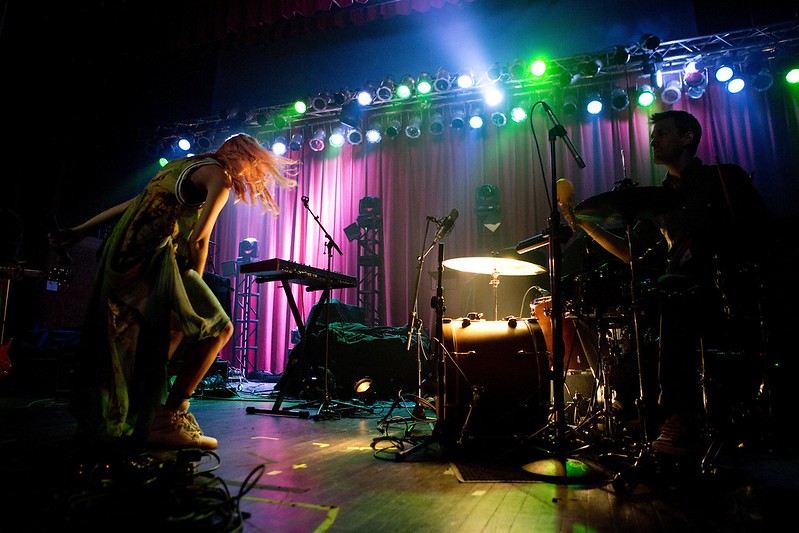 “I want people to get a little bit more rowdy,” a dedicated fan murmured in between sets. “It’s Phantogram. Get wild!”

Immediately after, the fog machine kicked in, covering the room in a premature haze. Voices cheered in anticipation as the room went dark and a robotic voice, sounding like a skipping record, ushered Phantogram to the stage.

Then, a sharp, all-encompassing blue light made everything visible. Mirrors covered the stage curtain (and Barthel’s jacket), reflecting all of the lights positioned above and around the stage.

The rest of the night was colored by a controlled chaos. The beams of light bent and pierced the darkness clinging to the walls and floating above the crowd. At times, every bulb lit up, flashing colors of red, blue and white across the stage in horizontal transparent bars before altering direction to light up over the crowd in the same manner.

Keeping your eyes open to see the stage became a challenge. How Barthel and Carter do it every night is a mystery. 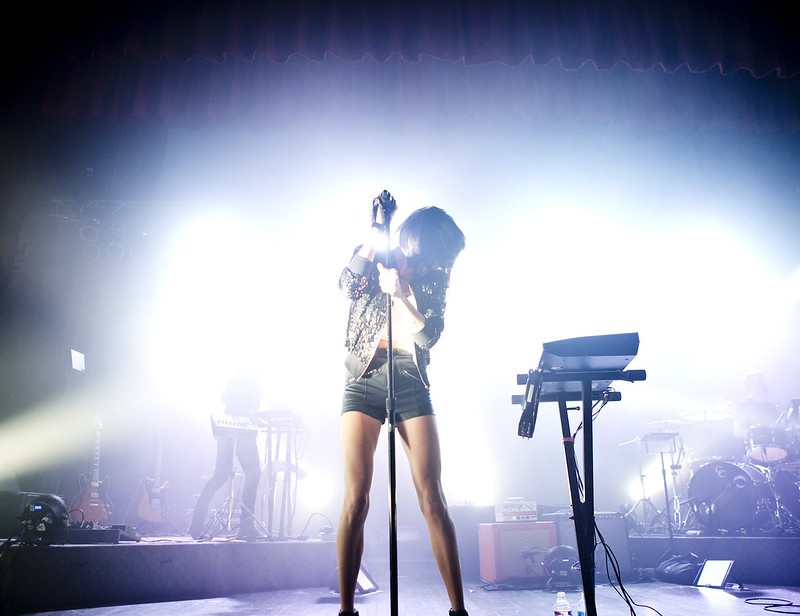 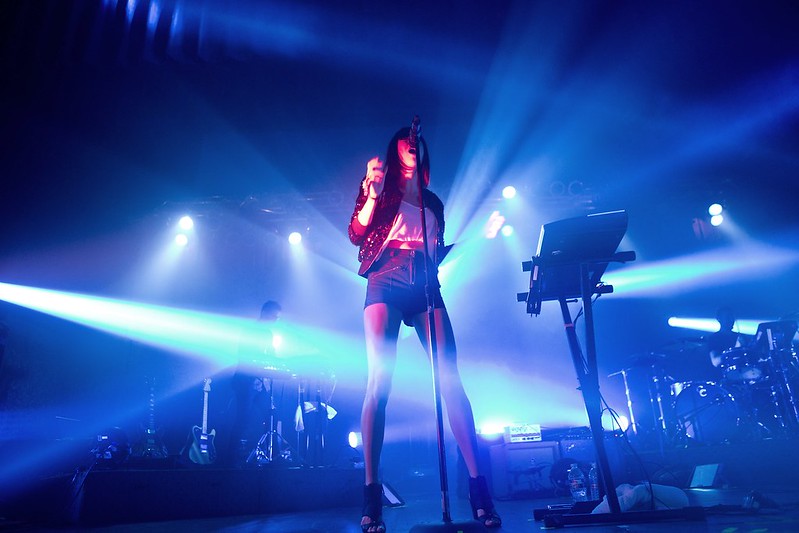 Barthel and Carter played songs from both their albums, Voices and Eyelid Movies, collecting applause to hits like “Fall In Love” and “Don’t Move.” Barthel’s voice lent a hard, yet dreamy, sound, mixing lyrical vocals with controlled yells lacking words but full of emotion. This balance between sharp, quick staccato and elongated, overlapping echoes created hard and soft sounds, which the light show mimicked.

“Give it up for John Fucking Carter,” Barthel introduced her fellow vocalist and guitarist. “We call him that because he’s good at untangling cables. He’s also good at dropping a dope fucking beat.”

Carter brought deep, rounded vocals and powerful punches of electric guitar that made the auditorium shake. However, he also knew when to pull back. During “Bill Murray,” Barthel stepped to a back pedestal where she donned a robe beaded with mirrors, transforming her into a human disco ball. As she sang hushed vocals that silenced the crowd, Carter quieted his guitar ending the song with a thoughtful picking solo before the show launched back into the rapid lights and notes from before. 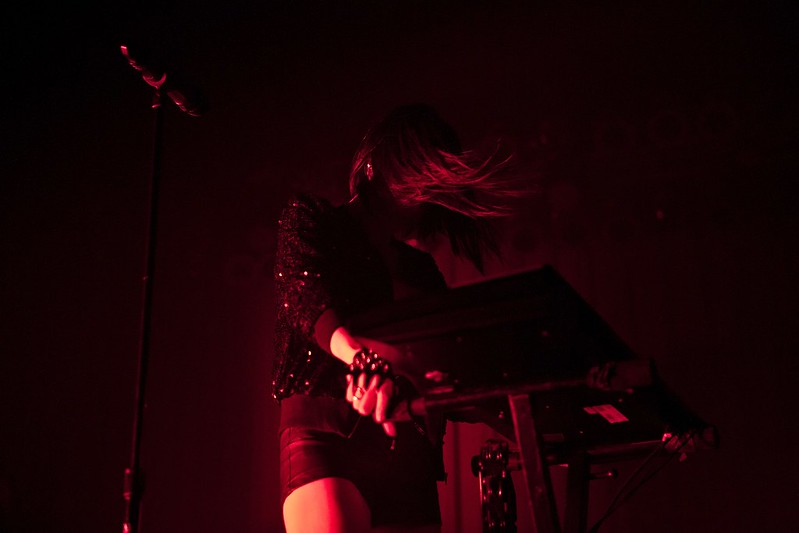 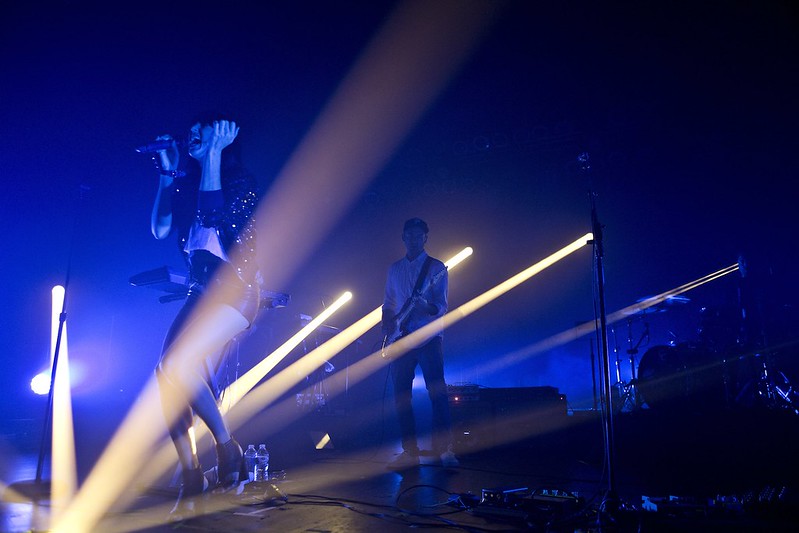 “Black Out Days” encompassed the entire show in one song. The verses were a clear, but tangled, depiction of internal voices, whereas yells of “ey ey ey ah’s” composed the chorus. Carter and Barthel’s voices overlapped in a foggy, disorienting echo as the lights continued to blind in their sharp, quick flashes. The whole song hit hard, but the last 30 seconds hit the hardest.

As Barthel whispered, “Black out days / I don’t recognize you anymore,” all of the lights faded, minus one strand of white light illuminating her from behind. And then the room went black.