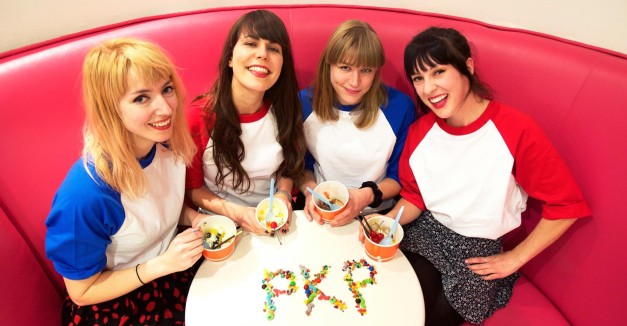 Allie Hanlon is not writing songs for your stuffed-unicorn-clutching daughter.

Sonically, her band, Peach Kelli Pop, is as sugary sweet as it sounds — accessible bubblegum-smack pop at its cutest with high-pitched harmonies and nostalgic summer guitars. But under the surface is a punk music veteran who’s unapologetic about the subject matter.

“The song is about sex dolls – not ‘falling in love with the wrong person’ as the writer seems to have interpreted,” Peach Kelli Pop retorts on its Facebook following the Stereogum premiere of “Plastic Love,” a single on the upcoming III.

It’s easy to read innocence, despite what the lyrics actually reference. With songs like “Do the Eggroll” from 2010’s self-titled debut, Hanlon keeps the subject matter light and on its tiptoes, dancing around silly, simple lyrics with fast, punchy drums and sing-song vocals.

“I try not to get too personal with songs because I’m going to have to perform them for days and days,” Hanlon says. “So sometimes you don’t want to think about something or else focus on it if it’s something that was hard for you personally. I mean, I have lots of silly songs and other stuff that’s just really fun or, you know, doesn’t really mean anything.”

California-based Peach Kelli Pop plays O’Leavers Friday at 9:30 p.m. The packed bill features openers BUHU, It Really Is and Omaha’s Lunch. Hanlon says she has copies of the new album on cassette before its release on April 21 via Burger Records. The album was first released on Bachelor Records. Before the O’Leaver’s show, the band will also play an in-store show at Urban Outfitters at 6 p.m., opened by Omaha’s Eric in Outerspace and The Baberaham Lincolns.

Omaha’s store houses the only Burger Records cassette vending machine, making Burger band Peach Kelli Pop a perfect fit for the location. We reported last month Urban Outfitters is recording the live performance and mailing the cassette to all attendees.

Hanlon says part of the reason they took the show is because Peach Kelli Pop’s current drummer, Mindee Jorgensen, is from Sioux City, Iowa, and wanted an all-ages show for her friends and family to attend.

Hanlon self-recorded the first two albums, 2010’s self titled and 2012’s Peach Kelli Pop II, playing all the instruments and compiling the vocals. For III, Hanlon recorded at ARW Studios in Los Angeles, and notes the sound quality as the biggest difference.

“It’s kinda risky to switch doing everything yourself to asking someone to help you and giving up lots of control with how your product is going to sound,” Hanlon says. “But I’m really happy we did it. It still sounds like what I hoped for, but the quality is a lot better.”

On another career page, Hanlon has also recently worked on music for the Cartoon Network pilot, “Get ‘Em Tommy.”  It was her first experience writing original songs based off descriptions someone fed to her.

“It was like, ‘Write something to show sadness,’ or ‘Give me a short song that sounds like something exciting,'” she says. “I’d never written anything besides my own stuff at that point.”

Although the show never aired, she says the opportunity opened her up to the idea of working in music outside of touring in bands.

While she says Peach Kelli Pop is “doing pretty well,” Hanlon is forthright about not touring for rest of her life — for financial reasons. That’s even with constant touring — Peach Kelli Pop is performing in Japan in May — and a notable indie label like Burger Records on the resumé.

“This whole thing isn’t really conducive to making enough money to do anything besides just live month-to-month,” Hanlon says. “I am definitely looking at other career options and hopefully keep making music. But something like that is challenging and interesting, and it pays well.”

Prior to Peach Kelli Pop, Hanlon drummed for garage punk White Wires and says she wasn’t used to being in the spotlight. While all creative direction is Hanlon’s for Peach Kelli Pop, she also has to take on all the spokeswoman responsibilities.

“It was a really big shift,” Hanlon says. “It was something I hadn’t considered — the really big factors. In fronting a band, people definitely watch you the most and you kind of set a tone for the set, and also what you’re about and the kind of energy you’re putting out there.”