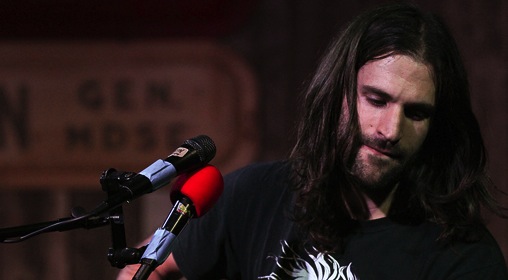 “This is home,” he says over the phone from the northeastern Nebraska town of 3,300.

The wide-open skies and relaxed attitude of West Point offer the singer-songwriter a reprieve from the rest of his life, spent either in comparatively hectic and bustling Houston, or playing shows all over the country, usually in month-and-a-half-long stretches.

On his website, Prinz currently has 16 shows booked between now and September, stretching from New Mexico to Omaha with one or two days off between five-day sprints.

For Prinz, who first garnered a following through his YouTube channel with his percussive guitar technique and breezy vocal stylings, the Good Living Tour concert, June 23 in West Point, is an opportunity to play one of his favorite places. In May, Prinz released his more recent EP, “Feeling It,” available here. It’s the singer-songwriter’s fourth proper release.

“You never know what you’re going to get out on the road,” he says. “Sometimes you don’t get much love. When you can play to people who know you, it takes a lot of the stress away.”

Recently, that’s meant appearances by Prinz at West Point’s annual car show and Cuming County Fair. Always, he says, he’s gotten a warm reception. Moreover, it’s a way for Prinz to give back to the place where he first cut his musical teeth.

“The big thing is sports,” he says of popular youth activities in West Point. “I tried that for a while but was fortunate enough to meet some likeminded individuals who were into music.”

One of those individuals was Chris Reed, his guitar instructor who now lives in Iowa. Prinz says, in an age before internet tutorials, Reed showed him how to play guitar — what could be done with the instrument.

“The idea of approaching it on my own was really intimidating, so he would show up and play these songs and I would be amazed,” Prinz says. “He would tell me where to put my fingers. He gave me the push I needed to believe myself.”

Through high school, Prinz played with his peers before studying sound engineering at Northeast Community College in Norfolk. He says that production experience was vital to his current success.

In part, Prinz says, playing his hometown is an effort to spark in others that same creative energy he had growing up.

“Often, the further into the center of country you get, you get more closed off from culture,” Prinz says. “(Playing shows there) is a step in the right direction to revitalize and bring people’s attention to art.”

And, for all that, Prinz gets to spend some time in one of his favorite places.

“I’m introverted but when I’m on the road I have to flip the switch and put myself out there,” he says. “I want to come back and recharge my batteries. This is where I get grounded. That’s Nebraska for me.”