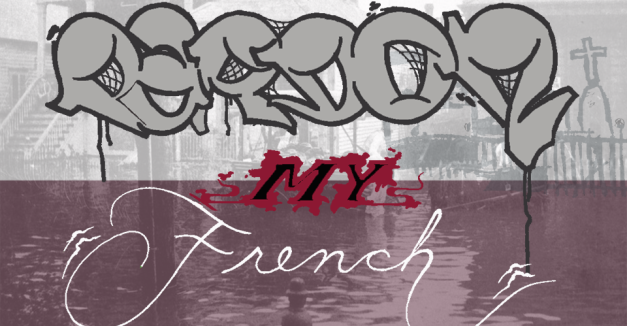 You wouldn’t assume Max Fischer has ever had a problem speaking his mind.

The Omaha emcee’s work with producer Downtown James Brown last year, The Tapeover, was both aggressively unapologetic and starkly grounded in reality. Musings and pontifications are trampled underfoot by confessions, shout-outs and call-outs. You wouldn’t call it “battle rap,” but the lyrics always feel as though they’re spoiling for a fistfight.

So in case none of that was evident enough, Fischer and Brown reunite on a song explicitly about sounding loud and proud, “Pardon My French.” They’re joined on the track by DJ Really Real (of M34N STR33T note), and it was mixed by Rick Carson of Make Believe Studios.

“Pardon My French” is a prime example of how Brown’s boom-bap samples smartly serve Fischer’s ferocity. The horn lines dance around and dissolve the rapper’s soapbox into a larger wriggling experience of self-possession and bravado.

Most important, though, is some vague (but crucial) counterculture chutzpah the song has in spades. If you’re going to do a song overtly about not selling out and not backing down, it had better really come off that way. “Pardon My French” does.