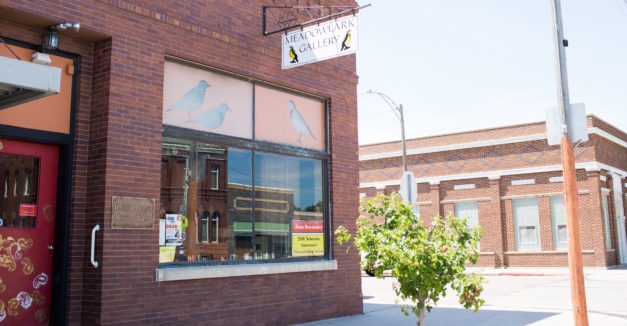 Step inside Meadowlark Art Gallery in Grant, Neb., and it’s hard to know where to look first.

A spinning wagon wheel sits atop an electric-powered rocking chair. Large wooden lettering spells out the words “LET’S DANCE” and “WORK,” taking up nearly two entire walls of the gallery. In the storefront, light bulbs hang from the ceiling, blinking on and off to the cue of a timer.

Gallery manager DeeAnn Tatum has taken her lunch break. Amid a scene much different from her desk job at the county clerk’s office, Tatum walks me through the art show she’s booked for the month, directing my eyes through all its visual quirks.

“It’s a small town, and we don’t have a movie theater,” Tatum says. “So this is our show.”

The gallery’s paisley painted door opened for the first time in 2004 thanks to the Perkins County Area Arts Council, a committee of arts advocates who organize events in the county’s five southwest Nebraska towns (Grant is the largest with 1,200 residents.) As an arts council board member, Tatum was instrumental in turning the then-vacant location into a resourceful, art-centric space for the community.

“There was an empty building here,” Tatum says. “It had to be used for the public good.” 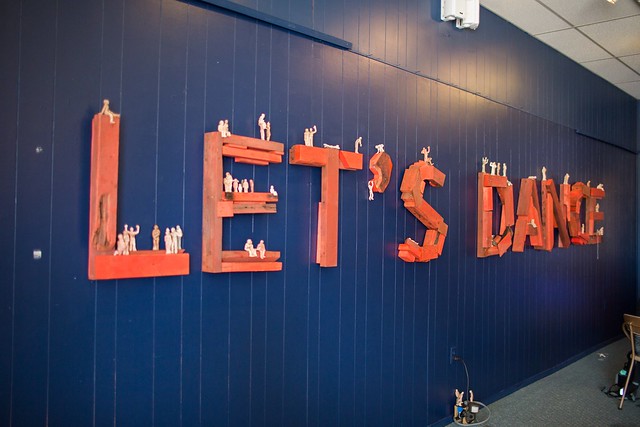 This red brick structure on the corner of 3rd and Central in downtown Grant housed the city library from the late ’60s until 2003. Today, the space serves Grant and the surrounding towns with local art, music concerts, summer art classes and events from March through November.

Functionally, Meadowlark is sustained by local volunteers — they are the glue of the gallery that averages 2,500 annual visitors. No one knows this volunteer role quite like gallery manager Tatum, who keeps track of inventory, organizes art classes led by local artists and books Meadowlark’s shows each month.

“I didn’t even realize there were that many artists in our community,” Tatum says. “I used to have to go and beg people [to do a show], but now they are coming to me.”

A painter by trade, Tatum focuses less on art making and more on art facilitation. Tatum sometimes even takes time off from her paid job at the county clerk’s office in preparation for weekends when the gallery opens for showings.

By talking with gallery regulars, it becomes evident Tatum has a way of taking care of artists — some who she says are shy, but still seek to have shows or teach classes at the gallery.

“Quite frankly, DeeAnn is the reason that [Meadowlark Art Gallery] works,” says Dana Harris, Grant’s city manager. “She is always looking for artists, and always trying to bring in some kind of cultural event.” 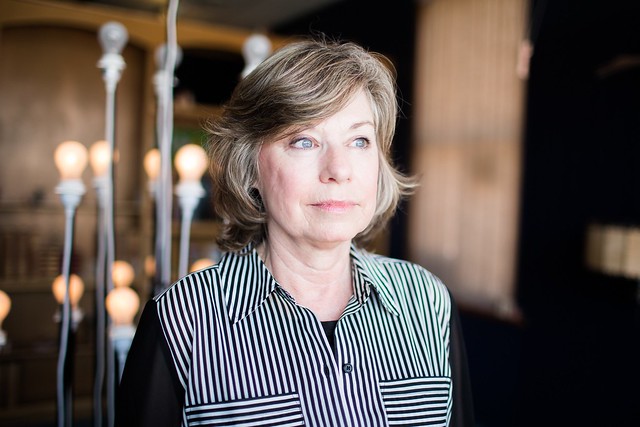 Harris meets me across the street from Meadowlark at popular lunch spot DJ’s Bar & Grill. She explains why Meadowlark and the Perkins County Arts Council are crucial to Grant and its surrounding communities.

“In western Nebraska especially, towns aren’t generally growing –– people are moving away–– you got to have as much as you can in a small community to give people something to do,” Harris says.

The recently hired city manager took the job in Grant after researching the town, in which she mentions discovering the Perkins County Area Arts Council website and Meadowlark Facebook page.

“[Meadowlark] was one of the many things that Grant has for a town this size that I saw and thought, ‘Huh, that’s interesting,’” Harris says.

Originally from Banner County in the southwest Panhandle, Harris moved to Grant in 2013 with her now-8-year-old son, and since then, they have been to every show at Meadowlark. In her mind, the gallery is essential.

“From the point of view of the city, we have to provide streets and water and the sewer and that’s really all we have to do,” Harris says. “But we want to provide a good quality of life, and that’s what the gallery does.”

Each February, Tatum organizes a trip that takes a group of 20 people to the Denver Museum of Art. Made possible by a donation by Dwight and Edith Hartwell, the Hartwell Art Tour is a daylong bus trip from Grant to Denver, costing only $30 per person. Each year, Tatum gives away one free ticket. It wouldn’t be surprising if Harris’ son wins, as he enters his name in the contest every time they go to the gallery.

“I just think it’s important for [my son] to be exposed to things that you wouldn’t necessarily get in a town this size,” Harris says. “Especially at his age, I want him to see different things.”

In addition to Meadowlark operating as an art gallery, its programming includes concerts, summer classes and Youth Art Month in March, when it displays middle and high school students’ work.

“[Meadowlark] is not just a gallery where the art hangs on the walls and that’s it,” Harris says. ”It’s the shows and the classes, and everything that goes on around it too.”

In June, when the Bike Ride Across Nebraska (BRAN) stopped in Grant on its western Nebraska bike tour, the gallery welcomed 350 people — 14 percent of its average annual attendance — in just one day.

That Saturday, June 4, was the biggest day Meadowlark has seen since opening 12 years ago. Visitors from across the state took in an installation by Omaha fine artist and musician Jamie Burmeister, whose art was on display.

Outside of the gallery, Burmeister performed with the busking polka-rock duo Polka Police (comprised of Jamie and his brother Jason Burmeister) to a crowd of sweaty cyclists.

Harris recalls the performance: “Even with the accordion, you could still recognize the rock songs they were playing,” Harris says. “They’d change a lot of lyrics too, so “Highway to Hell” was “Highway to Grant,” and “slow ride/take it easy,” was “BRAN ride/my chain is greasy. It was a lot of fun.”

With Meadowlark’s growing number of annual statewide visitors, it bands together a strong community of creatives in the southwest Nebraska region. Days like June 4 show how Grant is fostering broader cultural perspectives of music and art.

In talking about the rich resources and diverse activities provided by Perkins County Area Arts Council and Meadowlark gallery, Harris continuously points to the many people in Grant’s community, specifically Tatum, who help make Grant a more vibrant place to live and work.

“Small towns tend to move together to make something better,” Tatum says. “At least that’s how it is here.”