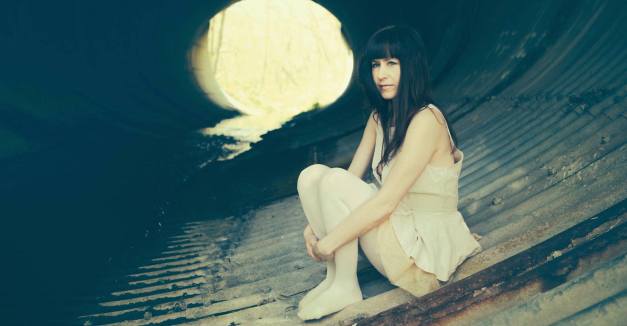 Orenda Fink’s Blue Dream can be both inherently perplexing to talk about and unequivocally stirring to listen to.

Through subterranean buzzes and crystalline guitars dancing around Fink’s pure voice, its themes and gestation are the stuff of lost and found dreams, psychoanalytic theories and shattering loss: That’s difficult to discuss, one would think, without being obscure, heady or personally over-exposed.

And, yet, in so many ways — since the album’s August release on Saddle Creek Records —Fink has found her faith in the unifying, cross-cultural currents of Blue Dream affirmed. Be it in the frequency of interviews turning into “heart-to-heart” conversations or a moment with a sobbing fan who can’t quite communicate why the songs struck such a poignant chord.

“For me the reason to tell this story is essentially to say, ‘You can heal yourself from within,'” says Fink, who first moved to Omaha more than a decade ago with Azure Ray co-creator Maria Taylor.

In the interview below, Fink and I discuss the difficulties in making the death of her beloved dog, Wilson, a piece of the press kit for the album, as well as how she maintains a practicing interest in the mystical while working as a touring musician and music professional.

Fink arrives at Omaha’s Slowdown on Saturday for the final show of her national tour. RSVP here.

Now, here’s my conversation with Fink, who was on the phone from her old stomping grounds of Athens, Georgia:

Fore more on Orenda Fink’s Blue Dream, she released the music video for “This Is a Part of Something Greater” this week: