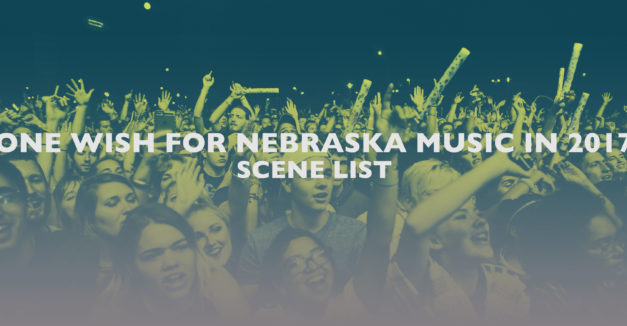 To help assess the year in music, we asked more than a dozens musicians, journalists and scene figures for their favorite albums, songs, shows and events of the year. Our final year end list features each of our contributors’ one wish for Nebraska music in 2017. Their answers range from the inclusive and progressive to the loft and bizarre. Read on for more.

Check out more from our 2016 year in review here.

If the Nebraska music community wants to be a haven for alternative and radical points of view and lifestyles, it must become more accessible and more inclusive; or risk losing its most energetic and creative voices to larger cities, or worse, artistic burnout. So I hope to see cultural capital shift away from traditional power-holders to people (women and non-binary folks, persons of color) who are more able to see the ways in which the community is currently not accessible and inclusive. We’re starting to see that in some ways. Milk Run is run by women, Duffy’s is primarily booked by a woman, Femme Fest continues to grow, Sleep Sinatra is keeping GOODGOSPEL going, there are more women running sound than there were a year ago. Still, name an institution in this state and most often it’s a white guy with the power. The best thing for those people to do is purposefully relinquish some of that power to people with different backgrounds than them. Personally, I’m going to not be hypocritical about this in 2017 and beyond.

I hope to see continued growth in the festivals, like Maha, New Generation and Lincoln Calling. I think those festivals deserve more national coverage and hype, and I think they can deliver in the coming years.

It’s awesome seeing so many good locals turn into national touring bands. I also hope to see Nebraskan bands touring not only out of state, but also making their way around the state. There are so many great places to play in this state that are not just Lincoln and Omaha. 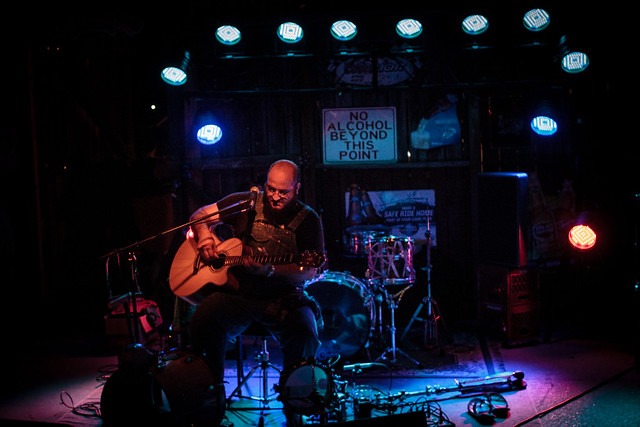 Specific to Omaha, I guess, but also for the greater good: I’m gonna go out on a limb here and say, in 2017, I’d like to see an article from a major music rag that lists Omaha as a top music scene for something other than Conor Oberst, Tim Kasher or Saddle Creek Records. Oberst and Kasher are good guys. Saddle Creek is a good label. They fully deserve those accolades. The thing is, there’s just way more to Omaha/Nebraska music than that these days. I’d like someone other than those of us entrenched in this thriving community who know it to finally say it, and frankly, I’d like the freedom to be out from under it. 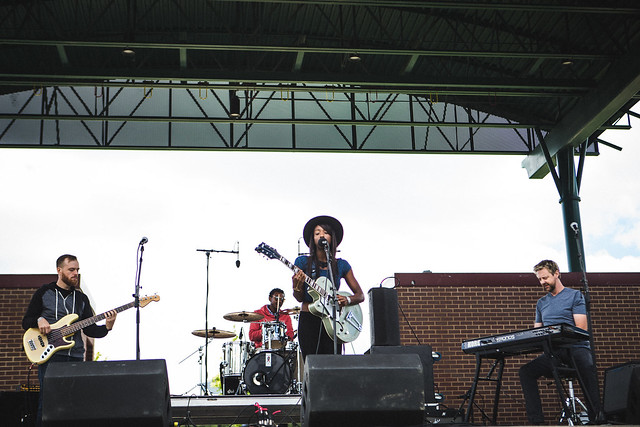 The continued expansion of the hip hop and urban culture. GOODGOSPEL is here to stay.

More women, femmes, nonbinary, etc. in male-dominated genres, like hardcore and metal. It’s starting to gain momentum here and I hope it continues into 2017. 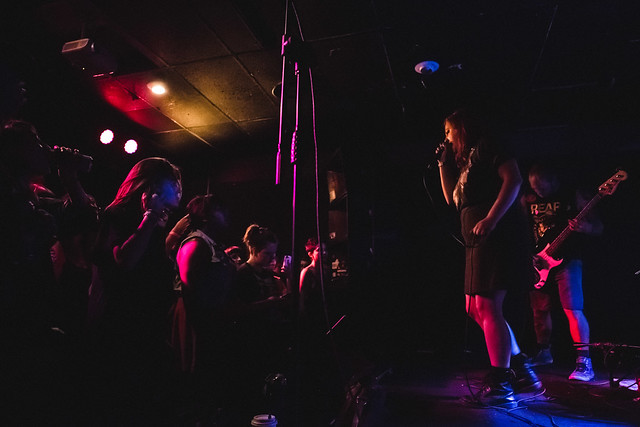 I’m always looking for more experimental music, and this year I’d like to see more improvised experimental music with larger groups that combine classical and rock musicians. That’s weirdly specific. Whatever. I want it.

I’d also like to see more music in general happening west of 72nd street. Let’s get the suburbs involved in our art scene, ya know? Let’s go to them. Churches, cafes, wherever we need to go to expand the audience for live music.

With a lot of more people being more consciously aware of political and societal issues that face ALL of us, the fact that many in the creative sectors of the world are finally starting to band together is extremely encouraging.  So many polarizing topics strive to divide people today with the election of Trump, the numerous messed up things Pete Ricketts repeatedly does and now the raids/witch hunts of DIY spaces (following the tragedy at Ghost Ship in San Francisco).  Recently it seems those involved in the creative arts have been a unified front and truly have each other’s back more now, instead of having small issues be sources of in-fighting within the “scene” which has been the case in the past. 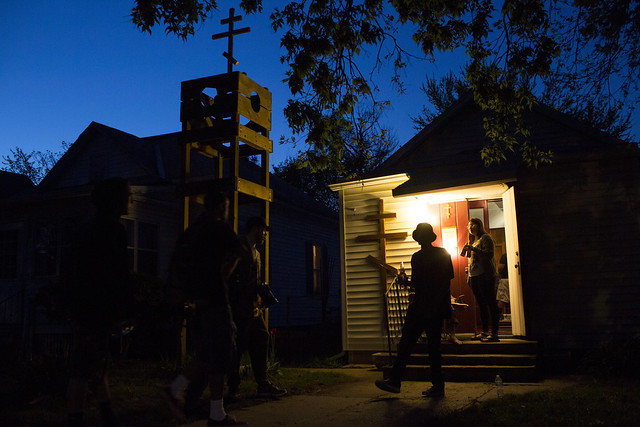 I hope to see venues filled with people for all bands!

People attending local shows. 2016 was, [in my opinion], the worst year of people supporting local music in my 30 years attending shows.

A concerted effort by all to activate more music consumers so that all venues fuller, more records are sold, artists make enough money to tour/grow and more professional development in management fields to aid artists in their growth. The physical infrastructure is great (venues, studios), the talent is there but we need more labels and managers helping grow the talent. 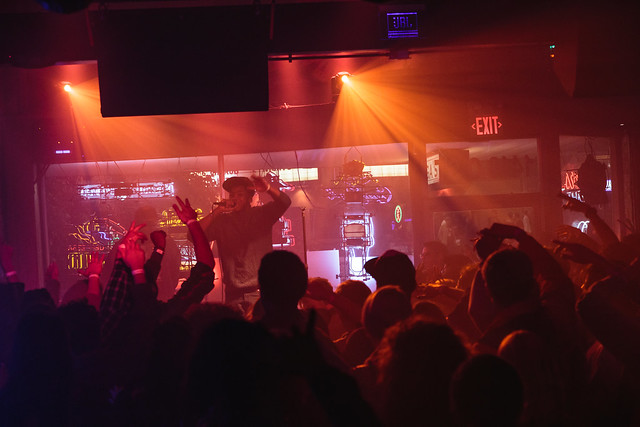 Both performs at Bodega’s Alley | photo by James Dean

More people at shows and a wider spectrum of performers/a more inclusive attitude in general everywhere. Promoters and venues and artists and bars and everyone working towards cultivating safe and radical environments for music and art to exist in!

I want to see artist build together and bring others up. We have a lot of cliques and groups. I keep saying this but we have to do this together. There will not be just one person or group to develop Nebraska Music it takes us all.  The New Generation Music Festival will be back on 2017 and beyond!

We did our first big street show in Benson over Memorial Day this year we’re hoping to do a few more in 2017. If they pan out, Omaha is in for a treat!

I’m hoping for more people to support musicians. Buy tickets, buy albums, buy T-shirts. At the very least, give a musician a high-five and say “good job.” Do what you can. Buying a streaming subscription isn’t nearly enough. Let’s support musicians because they’re an integral part of what it means to live in a democracy and having free-speech rights. And, as my friend says, “because it’s fun.”

A Record Pressing Plant. Thanks, Santa.

I’m really happy with the continuing effort to get the various larger music festivals in Lincoln and Omaha (MAHA, Lincoln Calling) noticed by larger regional/national audience. We have a lot to offer in the way of our music, but also in hospitality, venues, kindness, food, and more. Let people see the beauty of Nebraska and everyone living in it. Make it worth it to come to Omaha or Lincoln. No more Nomaha tours.

I think the music scene and the number of people following it in Nebraska is slowly/steadily starting to grow in numbers, quality, and diversity, and I hope to see that continue.

Personally I’m just really excited for the opportunity I was granted this year to become involved with The Commons here in Lincoln. I’ve been able to join a pretty incredible team of progressive thinking and hardworking individuals so I’m just excited to see The Commons become more successful and to see all the bands we are going to have coming through!

Collaborations crossing genres. I want to see music melt and mold onto and into itself. 2017 will be an exciting year for all of us, for sure! 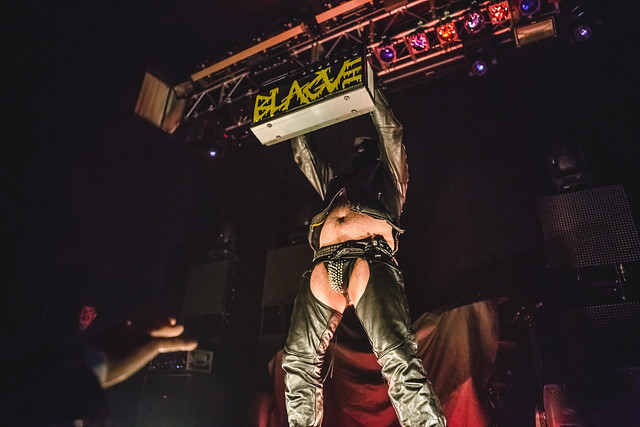