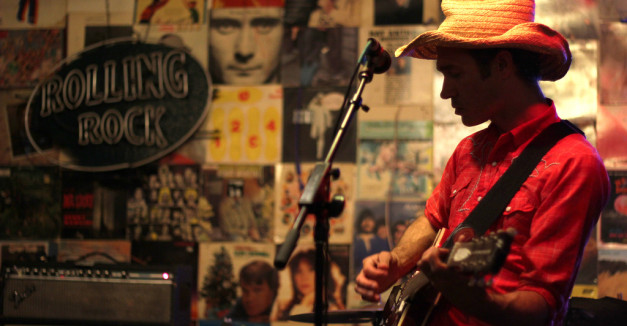 There is a version of Omaha music history that says Simon Joyner started a movement of singer-songwriters, but reaped none of the rewards.

It’s a whispered narrative that says maybe his folk music was a shade too dissonant or experimental to capture a large national audience. Or that he laid earnest, musical groundwork for the Saddle Creek boom, but missed the elevator to the top by playing the field when it came to record labels.

Only Joyner has never bought into those secondhand accounts. He disagrees with the premise that he was some kind of flashpoint for Saddle Creek bands such as Cursive and Bright Eyes, and he doesn’t view himself as the prototypical Omaha singer/songwriter of the early 1990s. The version of events that says Joyner missed out on high-profile tours and record deals presupposes that the songsmith ever chased those spoils in the first place.

Releasing 13 studio albums, founding two of his own record labels, occasionally touring the world and raising a family all while living in Omaha doesn’t make Joyner a “foot shooter.” Maybe, he says, he was just aiming somewhere different the entire time.

“For other people, it’s somehow a shame that I’m not more well-known or whatever. But I don’t feel that way. There’s no wrongs to be corrected,” Joyner says. “I feel like the music speaks for itself. Regardless of how many people have heard it, I feel like what I’ve done artistically is its own thing, regardless of where it took me.”

In the last two years, it’s taken him to previously unexplored heights of collaboration. Where Joyner was once such a deeply private songwriter that he would work only with carefully directed freelancers, his most recent album Ghosts marked his first experience working with a full band, The Ghosts.

And in July, Joyner released New Secrets with his one-time collaborator (from the 2003 LP Stranger Blues) Dennis Callaci. It’s an album that celebrates the pair’s long-rooted underground history. Best known for his work in the band Refrigerator and for founding Shrimper Records, Callaci, like Joyner, has remained a lo-fi, independent artist for two decades by defined and deliberate choice.

For the sixth installment of Sessions, Joyner and I met up at The French Bulldog in Dundee to discuss why there’s a Shrimper Records inside every songwriter, how he shed his boyhood Southern drawl and why writing songs about touring is akin to artistic death.

Listen to the full Sessions interview with Joyner here: