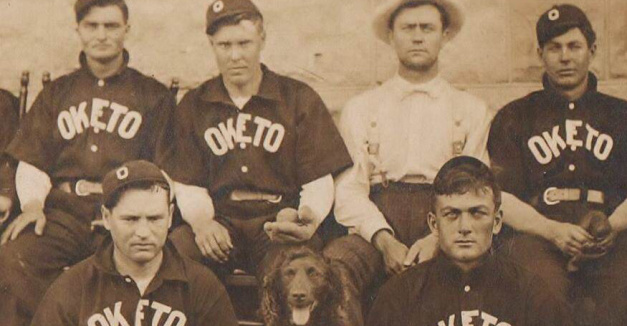 When Steven DeLair’s voice transforms into a wretched growl two minutes into “Like A Child,” it seems like Oketo is putting its own song on notice.

“If you thought you knew what the boundaries of the song were — (read: clean, spunky indie pop) — fuck your map.”

In a number of ways, this applies to all three songs released over the weekend by the Lincoln rock band Oketo. It’s a self-titled EP, produced and mixed by BZZZ (Sean Beste and James Fleege) at Silver Street Studios. It’ll be released physically at a Nov. 21 show with Twinsmith and LIFE is COOL. RSVP here.

Elsewhere in the six-minute song (3:08), DeLair sings like Biz Markie. Seconds after that, it’s some sort of affected neo-reggae voice. Moments later, it’s fun with consonants, an English scientist who sounds like he’s describing gadgets that all start with ‘P.’ All this to horns, harmony, plucky bass and riffy guitars. Oketo is fun and earnestly all over the place: chaos and eagerness.

The second track, “Mordor,” starts with sounds like a baritone video game struggling to boot up, followed by urban nightlife guitar riffs that sound like they’d soundtrack a Michael Mann movie. Like if you could only get to the Eye of Sauron by driving a Corvette silently through downtown Los Angeles.

The third track, “Wooden Eyes,” eventually bursts into an Arcade Fire-esque driving chorus in a song where the horns of Brandon Elwell and Kyle Brunner really get their playtime.

Zooming outward, it’s really quite difficult to talk about how Oketo is different than Jeazlepeats, the band it changed its name from earlier this year. Through the last couple years, there was a massive swing in an already big lineup. In both incarnations, songs are fundamentally pointy and harmony-centric. When Oketo came on Hear Nebraska FM two months ago, its members put on a brilliant acoustic performance, but no one (myself included) could really explain how or why this was different than Jeazlepeats. Just that it really, really was, the band made clear. This EP seems to indicate why, based on pure mentality. No band this young, with this much energy, is looking backward. Declaring newness and autonomy must feel deeply important.

These three songs feel like a deliberate sampling, like Oketo intentionally not picking a “thing.” If you considered a superficial set of parts, for instance, Oketo could easily shoot to be Twinsmith. But, no, the songs on the EP come off too restless, too weird, too interested in occasionally shredding their own charm.

Exhibit A is that the song they called “Liam” on the radio show a mere two months ago came out on the EP with a new title, “Like A Child,” and a boatload of rearranged lyrics.

Things sound like they’re moving quickly at Oketo HQ. For a band that’s maybe the biggest under-21 draw in Lincoln right now (with some band members not even of-age), the wildness, the willingness to steer the entire train off the tracks (despite popping and crackling production) is very much worth mewing along to. And then, if the mood strikes, shouting about.