When a man approached Omaha comedian Ian Douglas Terry after a bit about how much he hates horses, Terry thought he was in for a scolding.

“I was like, ‘Great, is this gonna be big horse fan?’” Terry recalls worrying.

Quite the contrary. The man praised Terry’s routine — in all its oddity — for transposing onto horses the hatred other comedians might direct toward women or the LGBT community: simultaneously fostering originality and pointing out the absurdity of hate comedy.

At the source of Terry’s alternative material is a punk rock credo banning homophobia, racism and misogyny, learned from the musical community where the comedian began performing in high school. Then partner that social principle with the DIY mentality Terry adopted while playing in punk bands in his hometown of Columbus, Neb., and later in Omaha punk outfit Renford Rejects. When Terry co-founded the OK Party Comedy collective three years ago, he carried those lessons with him.

Since 2010, OK Party has positioned itself at the helm of alternative comedy in Omaha, hosting stand-up Battle Royales at venues like The Waiting Room and Slowdown and attracting nationally renowned voices like Judah Friedlander, Rob Delaney and Doug Benson with the promise of a positive and uniquely Omaha experience.

“(As a touring comic) it’s between going to place get a paycheck and going to do a show to have fun,” he says. “And also get paid.” 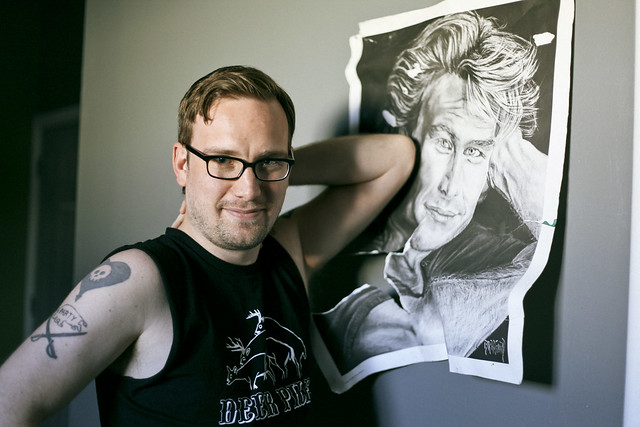 In June, Terry released his debut comedy album …and out comes the ghost horse. The album represents a buffet of some of Terry’s favorite stand-up topics, including professional wrestling and the late actor Patrick Swayze.

OK Party Comedy will be prominently featured as part of Omaha Comedy Week, which begins tonight at Slowdown. On Saturday, Terry and company will bring comedian Rory Scovel to The Waiting Room. See the full schedule of events below.

For the fourth installment of Sessions, Terry and I met up in the smoking patio of The Sydney on Fourth of July weekend to discuss his ultimate aspirations for OK Party Comedy, how he deals with the haters and why he still can’t write real jokes.

Chance Solem-Pfeifer thinks if you like “Point Break,” you simply gotta watch “Road House.” Reach him at chancesp@hearnebraska.org.