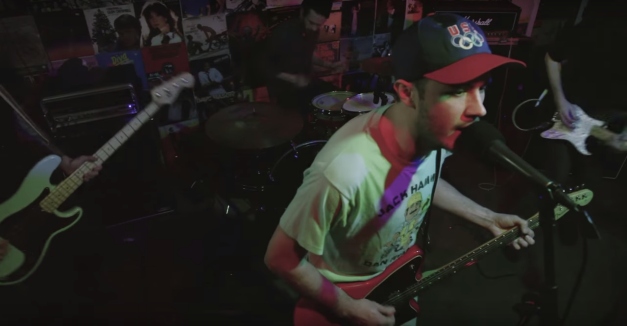 There’s no sign of respect quite like paying tribute to ones contemporaries. When that means performing in front of them, you better bring it. At O’Leaver’s for Take Cover Omaha, alt-rock quartet Uh Oh did just that for Eric In Outerspace.

“We’re huge fans of these guys and we think it’s time to take the next step from band-friends to something a little more serious, you know maybe some sleepovers or cook them some dinner or something,” Uh Oh frontman Joe Champion told us the week of the event.

Uh Oh’s rendition of “Off This” — though thankfully devoid of culinary endeavors — had the sentiment written all over it. It captured the claustrophobic, “let-me-out” spirit, jumping and shouting through the venue, putting a slightly upbeat spin on one of Eric In Outerspace’s most recognizable tunes.

Catch Uh Oh tonight at Milk Run with The Ridgways and Timecat (RSVP here). Watch the band’s emphatic nod to Eric In Outerspace below:

Thanks to O’Leaver’s sound engineer Ian Aeillo and Live At O’Leaver’s for recording and mixing.