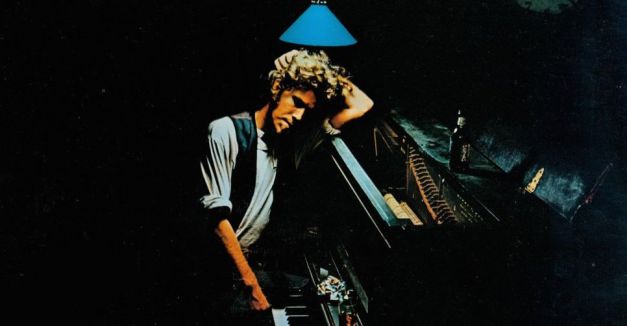 Editor’s Note: By the final hours of Christmas Day, you will feel like Tom Waits’ Closing Time sounds – wearily socialized, some cocktail of cheerful and empty. It’s our opinion you should give into that feeling of melancholy reverie, and scoot down to O’Leaver’s for a full performance of Waits’ first and retroactively appreciated album. Below, the players of The Nighthawks (named for Waits third album) — that’s James Maakestad (upright bass), Aaron Markley (drums), Chris Machmuller (vocals), Mike Friedman (guitar and pedal steel), Patrick Newbery (trumpet) and Dan McCarthy (piano) — guide us inside their understanding and interpretation of Closing Time. Some members sound off on their favorite songs. Others quickly dish on just being in the band. RSVP for the show here.

“I can’t remember the first time I heard ‘Grapefruit Moon.’ Maybe because it’s the sort of tune that when it strikes you it seems like you’ve always known it. Maybe it’s because it filled in that small part that was missing in the time preceding. To me, it is the perfect amalgamation of sadness and beauty, hope and remorse. Through highlighting these disparate emotional responses, ‘Grapefruit Moon’ coalesces into a song far greater than the sum of its parts, leaving the listener comfortably stranded in the twilight.”

“One of the things I really like about the Closing Time record is that included amongst a collection of mostly piano and horn-based jazz tunes are three rather straight forward acoustic numbers. Of these, I am particularly fond of ‘Old Shoes (& Picture Postcards).’  As a longtime fan of classic country and folk music, I can imagine that had it not been written in the early 1970’s, this song could be one that AP Carter might have pulled from the hills of West Virginia or the Louvin Brothers could have penned for their “Tragic Songs of Life”‘ LP. The kind of song The Band would have found in an old songbook and hooted and hollered their way through in the basement of Big Pink.”

“You listen to ‘Lonely,’ and it’s like Tom needed one more song to max out the LP (it’s about as long as you can fit on one 33­rpm platter), so he sat down at the piano and started playing his black­key chords, and ‘Lonely’ is what came out. It’s textbook Waits, a dramatic scene with an absent woman whose name is the only detail offered. It also seems artless, un­crafted: unlike the rest of the songs on the record.

As an accompanist, you have to really listen to the singer on a song like this, listen to his breathing to catch the cues. Simple enough in the living room, tougher at the Club. I think I’ll ask Chris to sit next to me on the piano bench for this one. We’ll see how it comes out.”

“Like ‘Ice Cream Man,’ the third track of Closing Time departs from the 1950s jazz sound of many songs on the record. ‘Virginia Ave’ retains some of the jazz influence, but it is simpler – more blue. It is the blues that creep through the song, and eventually ‘catch up’ by the end of the song in a frenetic jam.

In rehearsing the song, Mike suggested that the tempo should ‘plod,’ holding us to the backside of the beat. Every instrument in the song does play on the backside of the beat, creating the feel that Waits’ blues-heavy work does so well. The sense of time and tempo in the song is a drunken, yet graceful gait. That is, it doesn’t quite ‘plod.’ However, the sense of time is not the uncertain step of walking down a steep hill, in which the feet stop the body from tumbling forward. Rather, the rhythms of the instruments achieve a kind of lilt in its sauntering tempo. You can imagine the narrator not staggering home after the bar closes, but swinging along in his steps with the agility of a seasoned barfly – a true Nighthawk.

Bearing in mind that Closing Time is Waits’ debut, the significance of ‘Virginia Avenue’ lies in the fact that the song is the artist’s first recorded foray into the night, the role and setting of which are central in his catalogue. Waits is one of the great writers of nocturnal scenery and psychology – especially important in the 1970s material. The moon is almost a character in Waits’ songs, whether it is a grapefruit, banana, or just bloodshot.

‘Virginia Avenue’ is a slow walk home – or to the Greyhound station – after closing time at a well-worn local, with well-worn locals. The listener embarks on the journey of Waits’ world: from love to loathing, from the profound to folly.”

Q: What’s the most challenging song for the drummer?
A: “Martha”

Q: Isn’t it good to play with James [Maakestad] again?
A: Absolutely.

Q: Do you think there’s a power struggle in the Nighthawks between me and James?
A: I never really thought about it … but James does talk a lot of shit about you when you’re upstairs at rehearsal.

Q: Who do you think should win?
A: I’m really sick of James making you cry, so you’ve got my vote, Dan.

Q: Do you think most of the trumpet parts on Closing Time are improvised or written?
A: 90 percent improvised. And I like the use of the Harmon mute, it matches the grittiness of Waits voice.

Q: What’s the hardest song to play?
A: None of them are hard as long as I have Ghost of Girlfriends Past on my side!

Q: Trick question —what key is it in?
A: On Thursday it will be in the Key of Christmas. No more trick questions please!

Q: What band do you most regret being associated with — Nighthawks, Oquoa, or Tim Kasher (solo)?
A: Tim Kasher. The guy is just lazy … I mean, he only puts out like one album a year. Just embarrassing!