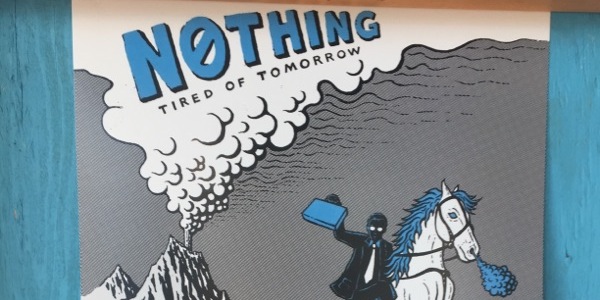 White noise fades up slowly in the Slowdown’s speakers, washing the crowd in unexpected statis, overpowering the room until all conversations stop. No one has stepped on stage. A lone voice breaks out, a reverberating and desperate-sounding mess over the P.A. The voice goes on about love, the necessity of it and our dependence on it. The voice might be right. We are fascinated by the feeling, constantly searching for it at great expense.

“There is no sleep without dreams of love,” the voice insists.

The band members trickle into their instruments. Static slices through the room. The piercing tones of feedback begin to creep forward, slowly harmonizing. Then, a wall of sound attacks the audience, low and delay drenched chords ripping their way through the venue. Nothing has brought us into their head.

It’s early Sunday night at Slowdown; local heavy hitters Bib start their set at 7:30, sounding like how punching a brick wall feels. The soundcheck and first song come at the same time. At no point do they allow the crowd to recover from this trained assault. The band speeds through its almost half-hour set without stopping, packing multiple breakdowns per minute, crammed at the front of the stage like in a war machine.

Singer Nathan Ma crouches and flails all over the place, going bug-eyed at all those near, keeping the crowd in sight and possibly afraid. During a “break” between songs, guitarist Brock Stephens shakes his guitar like it owes him a living to coerce some feedback out before launching again into the militantly heavy riffs. They ended their set the way they started it, loudly and abruptly.

The sun is just beginning to set as Miami band Wrong takes the stage. Wrong uses it a little more deliberately, occupying it more like a table than a tank. Complex and sometimes convoluted rhythm parts weave themselves under the soaring octaves of guitarist and singer Eric Hernandez, at times reminiscent of some very heavy post-rock. Other times the band cools off, softening the touch for a moment of tenderness between rounds of alternative metal.

Hernandez nearly croons during the slow moments, but when the music unleashes he snarls and heaves like a crashing boat. Bassist Andres Ascanio headbangs his thick, brown locks wildly the entire set, occasionally swaying guitarist Ryan Haft to join him in a cascade of hair. The set ends politely.

In the meantime, the Slowdown has filled up respectably. Drinkers stand at the bar with domestic beers, sit at the tables with cocktails. Nearly everyone wears something black. Fugazi and Bad Brains play over the speakers. Maybe it’s something with the venue’s set-up, but it’s all rather cordial for a concert featuring bands as heavy as they are.

Then all six members of Culture Abuse arrive on stage. They soundcheck, only to immediately deny any monitoring at all. All they want is the vocals. Fair enough – the whole band is bouncing on contact, audience members are clinking glasses and pogo-ing. Culture Abuse will tell you they are all about partying, and as soon as they stand up it’s going hot.

Singer David Kelling is hurtling around the stage like an angry seal, barking up and down every microphone, arms everywhere. A bulky digital camera at least 10 years old swinging around his neck jumps with every movement. Two of the three guitarists are spitting beer out like they have blowholes. Their bassist rocks a DIY ringed t-shirt that just has “SHIT” written on it in permanent marker.

A few songs in Kelling drops a shout out to Bib and another Brock Stephens band, Bent Life, before opening into Culture Abuse’s heaviest number.

“I’ll find a way out alive,” he screams, over and over, seal barking when he’s not yelling. His other discernable advice to the audience is “modern life is war.” Partying comes at a cost.

Kelling flips off the crowd, joking, to indicate there’s only one song left. The band starts ripping it up. He deepthroats the microphone and growls wholeheartedly, making the P.A. crackle with clipping, somehow trashing the microphone. Now useless to him, he chucks the dead mic over the band into the back wall of the stage, steals the guitarist’s mic with a bear’s lunge, and screams it out again.

The band plays on, carrying a catchy riff somewhere between garage and skate punk. Kelling is dancing — he carelessly chucks the surviving microphone over the rafter and lets it dangle as he does the ADHD twist and takes photos of the crowd using his ancient camera. The whole scene shimmies for a minute before devolving into a big rock ending, and the band dips out, letting the raucous noise of their pedals play them off.

Finally, with the sun out of sight and darkness enveloping the front room, Nothing begins. After the invasion of white noise and the detached hopeless romantic, the band takes hold of the room through gigantically looming sonics. It’s as if you took a punk band and stretched them out 800 percent. Rich, textured chords ring out for what feels like eternity.

They call themselves shoegaze, and the band does spend a lot of time looking at their feet. With lyrics as depressing as they are on “Tired of Tomorrow,” the title track from their new album, it’s no surprise.

“Stranded in today / Clawing from the outside / And I’m tired of / Tomorrow on the inside,” Singer Dominic Palermo and lead guitarist Brandon Setta breathily sing from opposite sides of the stage. Hard to be cheery while singing about a failed marriage.

“Eaten by Worms” is another track from the new album, and Palermo introduces it simply.

“This song’s about being dead,” he says, shrugging and turning to his bandmates. They go into some classic 90’s quiet-loud dynamic play, power chords wailing, and keep it loud.

Nothing later has some serious technical issues while on stage, and while the monitors and amps are being checked and checked again, Palermo reveals some discomfort about the crowd’s behavior, calling it the quietest room he’s ever been in. Even when playing acoustic shows, he says, two people will always be talking in the back through the entire set. The Slowdown crowd? Silent as a church.

“You guys just wanna hear 311 covers?” Palermo asks to try and keep the crowd warm during the long breaks between songs and frequent equipment issues. The crowd digs it ironically. The band plays the first 10 seconds of a 311 song before shaking their heads and chuckling.

“Entertain us!” yells another, probably only half-joking.

When the band finally climbs back as the set nears its end, the determination and dedication to the slow, meandering melodies the band is known for really begin to shine. Soft instrumentals sometimes sound the Angelo Badalamenti soundtrack for Twin Peaks.

The white noise begins to slowly fade up again, growing over the instrumentation. The band puts their instruments on the ground, letting them ring softly. The lights dim and the room is dark as the band washes offstage under the current of noise. A single light comes on and the stage is empty just as it started, with nothing.