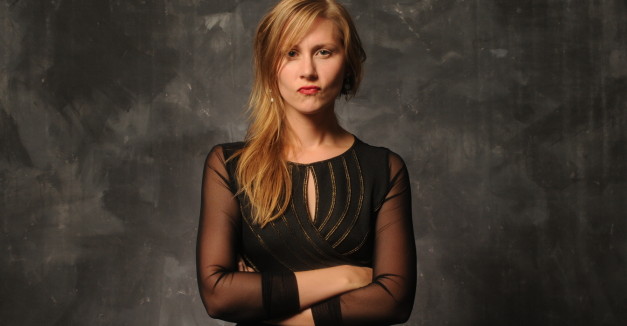 There is no industry standard reason as to why a musician decides to pursue her passion as a career. That being said, Nora Jane Struthers’ path was stranger than most.

Working as an English teacher in Brooklyn, Struthers’ identity was stolen. The culprit? Her boyfriend, the art teacher at the same charter school at which she taught.

Struthers, according to an NPR feature, was over New York City at that point. She packed up her parent’s minivan and headed to Nashville.

“I don’t think of it as unfortunate at all,” Struthers tells us via phone on Tuesday. “Formative perhaps.”

A professional musician since the incident in 2008, she has been rigorously touring for the last five years. Struthers says throughout her career, she has played more than 1,500 gigs.

Struthers and her band The Party Line bring their Americana to Omaha for the first time on Wednesday, playing Reverb Lounge with Kiernan McMullan. RSVP here. The Party Line consists of Joe Overton on banjo, Drew Lawhorn on drums, Joshua Varia on electric guitar and bassist Brian Miller.

The urge to play music professionally started much earlier than the identity theft incident though.

She listened to a wide variety of music growing up, beyond the Americana she plays now. In the ‘90s she described herself as a “grunge kid.” She mentioned listening to artists like Nirvana and Pearl Jam. She also mentioned Kid Rock, staying at least a little in touch with the country sound she hear as a kid.

While you won’t hear a Cobain rasp in Struthers’ voice or any rock-rap, it is clear that Struthers has been influenced by a wide range of genres.

“I really like the Americana catch-all genre because it allow these artists to combine a range of influences drawing from American music styles, and hopefully emerging from something new,” Struthers says.

She first cut her way into the bluegrass niche of Americana, but on her most recent album Wake released on February 24, she ventured into new territory both lyrically and instrumentally.

Wake has more rock influence than The Party Line’s first album Carnival. The rock ‘n’ roll influence can be heard on “Let Go” with an eight-count electric guitar track laid down on top of hooly drums.

“It was a revelation with me on this new album Wake to be able to include my other influences, and find that my music still has a home somewhere,” Struthers says.

She adjusted her creative process as well. Prior to the singer-songwriter’s most recent effort, she says her songwriting process was to simultaneously write and edit, influenced by her time as an English teacher. On Wake, Struthers’ creative process was free-flowing: Write, step back from it for a bit, come back and edit.

She says it was a concerted effort to make Wake different. It was also Struthers’ most introspective work.

“The Wire,” about an ex-boyfriend, puts lyrics of intense intimacy on display: “You held my gaze so tight, I couldn’t tell you were shrinking in size.” This is a distinct change in her writing. She is looking into her own experience rather than projecting someone else’s. She said the introspective work is more of a struggle.

“It’s hard to tell if it’s good,” Struthers says. “I know what makes good writing, but when you’re talking about your experiences it is hard to gain that perspective. You need to know what you are communicating and whether or not anyone gives a damn.”

Struthers says she’ll play at least half of that album Wednesday.

As Struthers continues to play shows and refine her craft, learn to read a crowd and work off their energy. Now as her and The Party Line have been playing together for about a year, Struthers says she is becoming comfortable on tour.

“I’ve been through a lot of personnel changes to get the right people, and it feels great to have the right people and be able to travel around the country with my friends and make music,” Struthers says.